It Doesn't Get Any Better Than Fighting At Madison Square Garden Against A Ranked Contender For Billy Quarantillo.
By Thomas Gerbasi, on Twitter: @TGerbasi • Nov. 5, 2021

Apologies may be in order for the friends of Billy Quarantillo, as he can’t attend any weddings this weekend due to pressing business in New York City.

“It's been wedding season,” laughs Billy Q, who got married to Brianna in March, celebrated the nuptials of teammate and fellow UFC fighter Matt Frevola in September, then followed it up with a trip to Tennessee to watch another Matt, this one his childhood friend, tie the knot in October.

Back to work, indeed. Quarantillo did get in one fight this year thus far, picking up a Fight of the Night bonus for his July stoppage of Gabriel Benitez, but the real action picks up on Saturday when he gets a UFC 268 main card assignment against Shane Burgos.

Yeah, this one should be good. How good? Good enough that on a card featuring rematches pitting Kamaru Usman against Colby Covington and Rose Namajunas against Zhang Weili, as well as an expected to be epic clash between Justin Gaethje and Michael Chandler, many believe Quarantillo-Burgos can steal the show. And if it does, it won’t be because the two played it safe. That’s not in the fighting vocabulary of either featherweight, and that’s good for us, but sometimes family doesn’t necessarily approve. So how is Mrs. Q looking at this fight?

“She knows that every fight I've gone into, people are like, 'Oh, this guy he's fighting is a killer, this guy's this, this guy's that,'” said Quarantillo. “She understands what I'm capable of, so she always has confidence in me. She's been to pretty much every pro fight I've ever had, so she's seen me win a very high percentage of them. The time I got a flash knockout loss, I wasn't even really hurt, so I've never had to go to the hospital after a fight. I've gotten stitches a couple times, so she really doesn't understand the type of violence that Burgos is capable of, and she hasn't seen the type of violence I need to bring out to take this guy out.”

"This fight for me puts me into the top group and right where I want to be."

So in other words, she may be in for a surprise she doesn’t necessarily want to see as the Garden faithful roar in approval. Hey, that’s the fight business, and Quarantillo loves it, as well as the prospect of having to go to some dark places to get his hand raised. But if he has his way, he’s getting in the Octagon, taking care of business and having a chance to go out to the floor to watch the rest of the event.

The Buffalo native has finished 12 of his 16 pro MMA wins, including three of his four victories in the Octagon, putting him in a good place heading into the bout with Burgos, who currently sits in the 14th spot of the featherweight Top 15. It’s an opportunity for Quarantillo (4-1 in the UFC) to make his way into the rankings, and he gets to do it in the world’s most famous arena.

“Fighting at Madison Square Garden is like a bucket list thing for me, and I know how important it is for so many other people,” he said. “Talking to my dad and his friends, they're like, ‘No matter what happens, you're fighting at the Garden.’ And it means so much to so many people, so it's definitely gonna be different. Every fight's your biggest fight, but this one is special.”

Being in MSG itself is important for the 32-year-old, but perhaps taking the experience up a notch is that he will be fighting in front of a packed arena for the first time since his UFC debut in Washington, DC in December 2019. 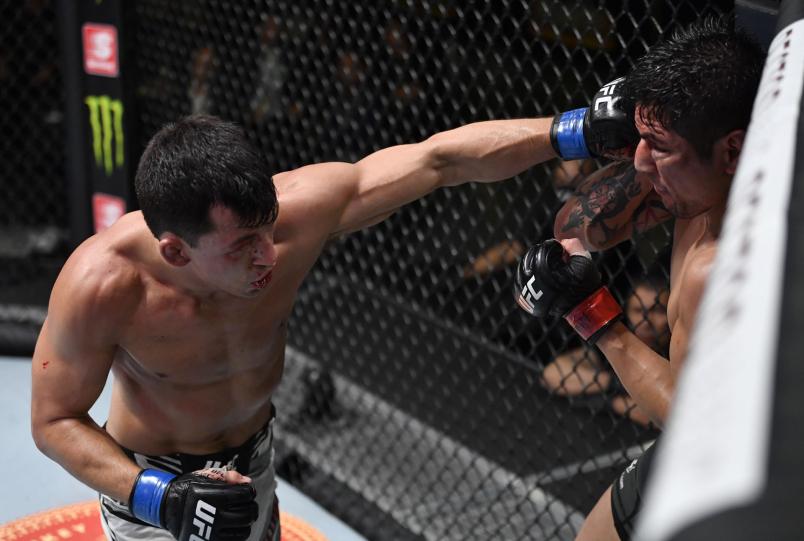 “I can't wait,” he beams. “It's a boost, it's gonna bring the electricity and amplify the fight, and it's two guys from New York. I've got a bunch of people coming to the fight, I'm sure he's got a bunch of people, and mine and Shane's style of fighting, I know that's gonna bring out the crowd, especially since there hasn't been a fight there in two years. This is why I got into the UFC - for crowds like this. This is what I dreamed about as a little kid when I was either dreaming about becoming a pro wrestler or a hockey player or a football player, or whatever I thought was cool back then, and then that shifting into knowing that I wanted to be a UFC fighter and I wanted to fight on these huge cards, fighting a contender, fighting my way into the Top 15 and being an underdog. I think it's a great story, and all I've been focusing on is this fight and doing everything I can do to go and take this guy out.”

But is this going to be more exciting than another wedding?