UFC 263 is stacked with three fights worthy of a headliner spot. For the first time in UFC history, a non-title fight taking place outside of the main event will be contested over five rounds, as Nate Diaz returns for the first time since 2019 to fight contender Leon Edwards in a 25-minute fight. A win for Edwards could get him a title shot in his next fight.

UFC 263 also has two title fights, which are both rematches. The first title fight is a flyweight title bout between champion Deiveson Figueiredo and Brandon Moreno. Figueiredo and Moreno previously fought to a draw in a classic fight at UFC 256 in December 2020. The main event is a middleweight title bout between champion Israel Adesanya and Marvin Vettori. Adesanya and Vettori previously fought in April 2018, and Adesanya edged out a split-decision win.

Below, we preview the UFC 263 main card and examine some of the UFC betting offerings for the event by DraftKings Sportsbook.

Refer a friend and get a free DraftKings Sportsbook bet up to $100! Head to the DraftKings Playbook Promo page for more details!

To Win by Finish 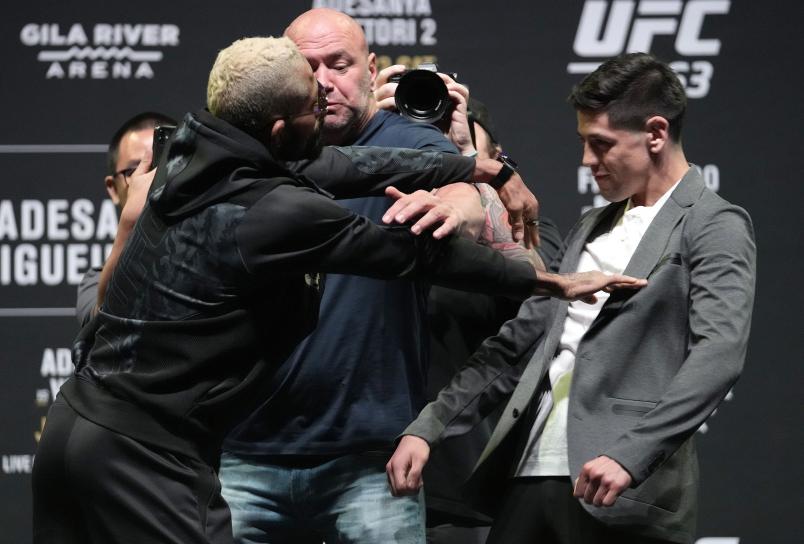 (L-R) Opponents Deiveson Figueiredo of Brazil and Brandon Moreno of Mexico face off during the UFC 263 press conference at Arizona Federal Theater on June 10, 2021 in Phoenix, Arizona. (Photo by Jeff Bottari/Zuffa LLC)

Figueiredo entered his first fight with Moreno coming off four straight finishes, including three first-round submissions, which Figueiredo actively hunts. Figueiredo has attacked armbars, chokes and leglocks in scrambles in recent fights, most recently attacking a leglock against Alex Perez after Perez attempted a single-leg takedown, which created another scramble that led to Figueiredo sinking in the fight-finishing guillotine choke.

Because Figueiredo actively hunts submissions rather than waiting for opportunities, Figueiredo has posted big submission statistics, leading the flyweight division in submission average per 15 minutes (2.36) and total submission attempts (18). Figueiredo is confident in his guard and scrambling, which allows him to aggressively attack submissions because he does not fear being on his back.

Figueiredo also has very powerful striking, which is a big threat for him both in the stand up game and on the ground. On the feet, Figueiredo leads all flyweights in total knockdowns (8) and ranks third best in the division by knockdowns per 15 minutes (1.05). Figueiredo also displays ferocious ground-and-pound, which at times has opened up submission opportunities, most notably in his fight against Joseph Benavidez where thunderous ground-and-pound forced Benavidez to give up his back and allow Figueiredo to sink in a fight-finishing choke. Figueiredo leading the division in submission attempts and knockdowns paints a good picture for why he is so strong at finishing fights.

Figueiredo and Moreno’s first fight was an instant classic and highly competitive, with both fighters displaying incredible toughness. Figueiredo landed several vicious strikes that would have folded most other opponents, but Moreno kept eating the shots, which seemed to surprise Figueiredo. Moreno also had moments where he caught Figueiredo with flush strikes, but Figueiredo’s strong chin allowed him to eat the shots. The final striking tally was incredibly close, with Figueiredo landing five more significant strikes—137 to 132. Both fighters were able to score takedowns, but both fighters were able to scramble up and avoid significant control time or damage on the ground.

Figueiredo does have flaws that could potentially be exposed by the right opponent. On the feet, Figueiredo is prone to keeping his hands remarkably low, which makes him hittable. This could theoretically make him more susceptible to a fight-changing bomb if he mismanages the distance or gets hit with a strike he doesn’t see coming. However, Figueiredo has a strong chin and eats the strikes he absorbs, and he also uses movement and distance to avoid having opponent strikes land with full power, which gives him margin for error.

Figueiredo has also been susceptible to takedowns. Figueiredo has stopped only 61% of opponent takedown attempts in his UFC career and got taken down by Moreno multiple times in their first fight.

If Figueiredo is going to lose the belt, it will most likely be against an opponent who can either take advantage of Figueiredo’s low hands with a big power shot or put together chain wrestling and win a fight with takedowns and control time. Moreno had success in the first fight finding Figueiredo’s chin and taking down Figueiredo, but did not have enough punching power or top control to really make Figueiredo pay. Moreno has recorded only two total knockdowns in 10 UFC fights and has not recorded any knockdowns in any of his last four fights — he won via TKO over Brandon Royval at UFC 255 after Royval dislocated his shoulder and was unable to defend himself, which is Moreno’s only career UFC finish due to strikes. Moreno has not been particularly accurate with his striking either, landing just 38% of his significant strike attempts, although this number played up against Figueiredo’s leaky striking defense in their first fight, with Moreno landing 53% of his significant strike attempts.

While Moreno’s toughness and strong chin can fuel another competitive fight, Figueiredo is the more potent striker and grappler. Figueiredo constantly hunts submissions in scrambles and is capable of attacking the neck, arms and legs. Figueiredo has more explosive skills in both striking and grappling, which gives him multiple ways of finishing the fight. Figueiredo has more ways to win, and had he not been deducted a point for a groin strike in their first fight, he would have won a decision on points.

Since Moreno is incredibly tough to finish with strikes due to his granite chin, we could see Figueiredo alter his game plan for this fight. Moreno has not officially been finished in his professional MMA career, but he did lose via submission to Alexandre Pantoja on The Ultimate Fighter after giving up his back off a takedown. The reason the submission loss is not on Moreno’s professional record is because the fight is officially classified as an exhibition bout.

Figueiredo could decide that his best method to beat Moreno this time around is to actively hunt submissions through grappling. Figueiredo did go for several takedowns in the first fight and was successful on two of them, including in the closing seconds of the fight, where Figueiredo took Moreno down with less than 15 seconds left and had the buzzer go off while he was in top position. Creating a scramble could allow Figueiredo to find Moreno’s neck or limbs and lock in a submission rather than trying to knock Moreno out, which was an incredibly difficult task in the first fight. Figueiredo could also try to do his striking damage on the ground from top position this time around, which could set up a submission if Moreno rolls over and gives up his back in an effort to escape.

Ultimately, I expect Figueiredo to win, and Figueiredo by submission at +750 is a higher-paying option that I think has a realistic chance of happening. 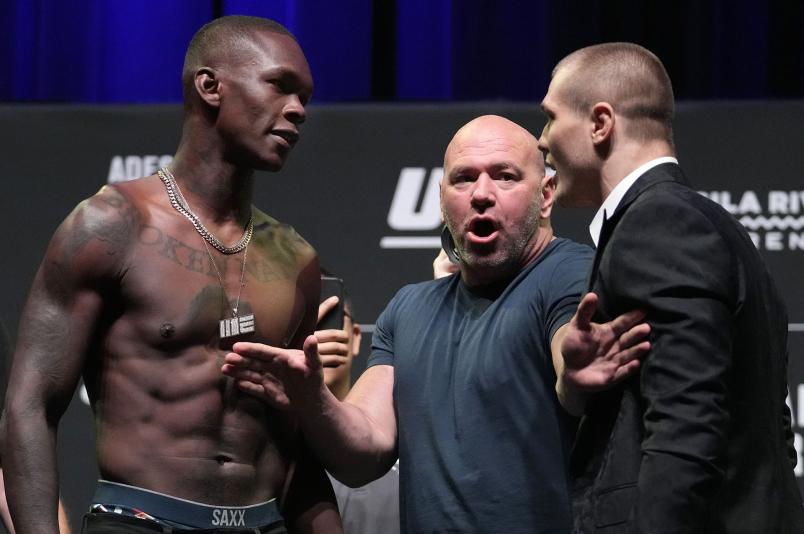 Opponents Israel Adesanya of Nigeria and Marvin Vettori of Italy face off during the UFC 263 press conference at Arizona Federal Theater on June 10, 2021 in Phoenix, Arizona. (Photo by Jeff Bottari/Zuffa LLC)

Adesanya is tall and lengthy with elite kickboxing. Adesanya stands 6’4” with an 80-inch reach, which gives him a substantial length advantage over most of his opponents at middleweight. Adesanya will have a six-inch reach advantage over Vettori, which is notable for distance strikes.

One of Adesanya’s best attributes is his striking defense, which is due in part to his long limbs, which allows him to position himself just outside of his opponent’s striking range. 65% of Adesanya’s opponent significant strike attempts have not landed at middleweight, the second best rate among active middleweights and the fifth best rate in the history of the division. Adesanya is also very quick and elusive, which he combines with his length to avoid being hit cleanly.

Adesanya also has potent offense and ranks in the top 10 among all middleweights in knockdowns per 15 minutes. Adesanya strategically leaves his hands low at times in order to bait his opponents to attack him, where he can launch counters and set traps.

On a rate basis, the only active middleweight with better striking defense than Adesanya is Marvin Vettori. 66% of Vettori’s opponent significant strike attempts have not landed, the best mark among active middleweights. However, this number played down in their first fight, with Vettori’s striking defense falling to 54%. Vettori is very tough and has a strong chin. Vettori has not been knocked down in any of his 10 UFC fights and has not been finished in any of his 22 career fights—all four of his losses are by decision.

As long as this fight stays on the feet, Adesanya is going to have a significant advantage. The first two rounds of their first fight primarily consisted of Adesanya picking Vettori apart in the stand up. Vettori wasn’t successful on any takedown attempts until the third round, but he had a strong third round on the back of increased assertiveness in his grappling, recording two takedowns and controlling Adesanya for over half the round.

The one glaring weakness in Adesanya’s skill set is his bottom game. Jan Blachowicz took over late in Adesanya’s last fight with takedowns and top control, leading two judges to give Blachowicz a 10-8 round in Round 5. Adesanya had basically nothing off his back and was mostly hanging on. A similar theme happened in the third round of Vettori’s first fight with Adesanya, which could provide Vettori a blueprint to follow for the rematch.

Vettori attacked lengthy middleweight Kevin Holland with takedowns and top control in his most recent fight. Vettori took Holland down a heavy 11 times on 17 attempts and controlled Holland for 20 minutes in a 25-minute fight. If Vettori is going to beat Adesanya, this is his best method for doing so. By putting Adesanya on his back, it negates Adesanya’s biggest strength, which is his distance striking, and puts Adesanya in a position where he is not much of an offensive threat.

Vettori had success using this strategy late in his first fight with Adesanya, but it was too late, and Adesanya’s success in the first two rounds on the feet earned him a decision win. If Vettori can continue what he implemented in the third round of their first fight, he could grind out a decision win using control time, takedowns and top position.

This fight is probably closer than the betting odds indicate. Vettori has a legitimate method to victory, and while Adesanya is clearly the better striker, Vettori can diminish this through assertive grappling, especially as the fight wears on. Vettori’s strong chin and toughness also protects against him getting caught with a shot while closing the distance to grapple. While I think Adesanya is more likely to win, I think the odds should be closer, so I’ll go with Vettori and chase a better payout at +215 on the moneyline.

Vettori costs only $6,900 for this week’s DraftKings fantasy MMA tournament, which makes him the third cheapest play on the slate at the nice salary. Because I think Vettori has a good chance to win, Vettori is a highly appealing play for me at this price. Vettori finished with an explosive 156 DraftKings fantasy points (DKFP) in his last fight against Kevin Holland due to a gigantic amount of control time and a lot of takedowns. Since Vettori may execute a similar strategy for this fight, we could see another 100+ DKFP performance on the back of a lot of control time.

Put your knowledge to the test. Sign up for DraftKings and experience the game inside the game.

All views expressed are my own. I am an employee of DraftKings and am ineligible to play in public DFS or DKSB contests.