How do you follow up a blockbuster like UFC 261? By delivering another star-studded lineup capped by crowning a new lightweight champion, that’s how.

Saturday night, the Toyota Center in Houston, Texas plays host to UFC 262 — a massive fight card stacked with emerging talents, competitive divisional matchups, and a pay-per-view main card on par with some of the best to touch down inside the Octagon in recent years.

With fans back in attendance for the second time this year, the evening will draw to a close with a pair of crucial lightweight matchups, beginning with former interim champ Tony Ferguson taking on streaking threat Beneil Dariush before Charles Oliveira and Michael Chandler battle to determine the next UFC lightweight champion in the main event of the evening.

This is a powerhouse collection of contests that will come out the gate fast and keep running hot right until a new lightweight titleholder is crowned, with a handful of up and comers looking to use this must-see event as their opportunity to make some serious noise and further their own quests for championship gold.

This is the UFC 262 edition of Fighters on the Rise.

Fresh off a unanimous decision win over Roxanne Modafferi in January, Viviane Araujo aims to punch her ticket to flyweight title contention in this showdown with former title challenger Katlyn Chookagian on Saturday night’s main card.

The 34-year-old Brazilian is 4-1 inside the Octagon, having earned consecutive unanimous decision wins over Montana De La Rosa and Modafferi since dropping a decision to divisional stalwart Jessica Eye at the end of 2019. While her last two performances solidified the Cerrado MMA product’s place in the Top 10, this weekend’s contest is Araujo’s opportunity to elevate herself into the title conversation, as Valentina Shevchenko is always in need of fresh contenders and there are very few competitors in the Top 10 that have yet to share the cage with the dominant champion.

Chookagian is like the penultimate boss at the end of a video game; the daunting adversary you have to vanquish before you can face the big boss in hopes of completing the game. Thus far, the 32-year-old “Blonde Fighter” is 6-3 in the UFC flyweight division, having come up short in her own attempt to claim the title, as well as bouts with Eye and Jessica Andrade, both of whom went on to challenge for championship gold in their next appearances.

Getting the better of Chookagian is a tall order — she’s 15-4 overall — and Araujo will have to be at her best in order to secure the victory, but if she’s able to extend her winning streak to three and become just the fourth flyweight to get the better of the Mark Henry trainee inside the Octagon, she will put herself on the short list of fighters that could potentially face Shevchenko for the title later this year. 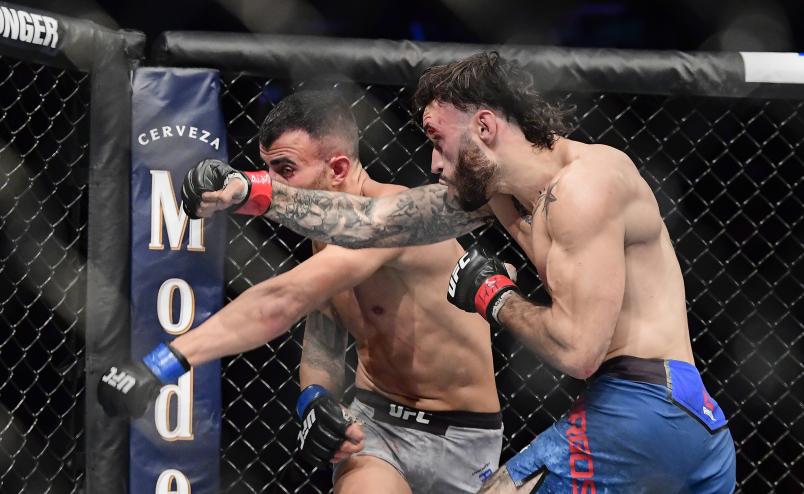 Shane Burgos is allergic to being in a boring fight.

While I’m not a doctor and I haven’t seen the man’s medical records, I feel pretty confident making that statement because through eight UFC appearances, the 30-year-old “Hurricane” is 6-2, with every fight being wildly entertaining and his two setbacks coming in Fight of the Night-winning clashes against a pair of Top 10 fixtures, Calvin Kattar and Josh Emmett.

This weekend, the Bronx-born Team Tiger Schulmann representative makes his first start of the year in another matchup guaranteed to produce fireworks as he lands on the pay-per-view main card opposite Edson Barboza. Like Burgos, the Brazilian veteran is incapable of being in a pedestrian affair, with Saturday night’s bout serving as a critical matchup in each man’s quest to ascend the highly competitive featherweight ranks.

Currently stationed at No. 9 in the rankings, Burgos has nothing but standouts ahead of him and a collection of hungry upstarts (and Barboza) nipping at his heels, with several others sitting outside of the rankings desperate to get their shot to join the fray.

Fundamentally sound and the type of fighter that gets better as the fight wears on, Burgos has a chance to elevate himself to the fringes of contention with a victory here, putting himself in a position where he could be the lower-ranked half of the pairing next time around. Barboza has looked very good since moving to the 145-pound ranks last year and brings a wealth of experience with him into the Octagon this weekend, but if Burgos can get himself back into the win column by turning back the former lightweight standout, his profile in the ultra-competitive featherweight division should rise. 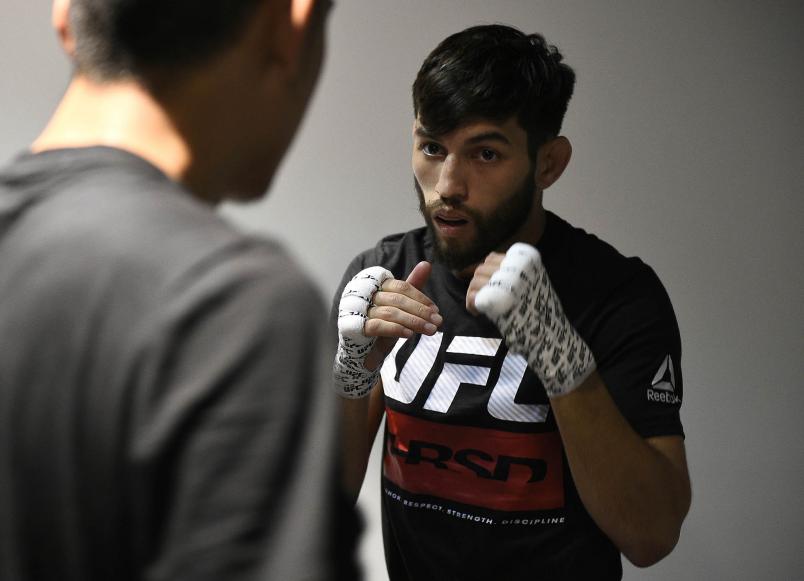 Matt Schnell warms up prior to his fight during the UFC Fight Night event at Etihad Arena on UFC Fight Island on January 20, 2021 in Abu Dhabi, UAE (Photo by Chris Unger/Zuffa LLC)

After an inauspicious start to his UFC career, Matt Schnell has developed into a dark horse contender in the flyweight division.

Since suffering consecutive stoppage losses in his first two appearances, including one up a division against bantamweight contender Rob Font, "Danger" has collected five wins in his last six outings to claim a spot in the Top 10. Last time out, the Fortis MMA representative turned in his most complete showing to date, showcasing swift hands and quality footwork as he out struck heavy-handed veteran Tyson Nam.

Now in his tenth year as a pro and fifth as a part of the UFC roster, the 31-year-old from Shreveport, Louisiana has established his footing in the flyweight division and is starting to level up, turning the raw tools and potential he exhibited on his way the Octagon into a complete and diverse skill set that should allow him to flourish in the 125-pound weight class for the foreseeable future.

This weekend, Schnell steps in against Rogerio Bontorin in a matchup of Top 10 talents looking to take another step forward in the flyweight division, even though this bout will be contested at 135 pounds. The Brazilian is an excellent grappler that will test Schnell's scrambling ability and defensive wrestling, potentially allowing the eighth-ranked American the opportunity to showcase another dimension of his arsenal inside the Octagon.

With a victory on Saturday, Schnell should take another step forward and position himself for another big opportunity in the second half of the year.

Tags
On The Rise
Houston
ESPN+
pay per view