Jan Blachowicz Never Imagined His First UFC Light Heavyweight Title Defense Would Be Against Israel Adesanya, But UFC 259 Is Exactly The Moment He's Been Waiting For.
By Gavin Porter, On Twitter @PorterUFCNews • Mar. 5, 2021

When Jon Jones stepped away from the UFC’s light heavyweight division to pursue his goals at heavyweight, it wasn’t clear who would be the next king to claim the light heavyweight throne. At UFC 253, Jan Blachowicz knocked out Dominick Reyes, leaving no doubt that it was his time to reign over the division.

The 38-year-old fighter’s career is the definition of persistence.

It took Blachowicz 15 UFC fights to become champion, and after starting out his UFC tenure 2-4, he knew he had to right the ship or else he might be cut from the promotion. Blachowicz would go on to win eight of his next nine fights, seven of which he was the betting underdog. It has been an improbable run for Blachowicz that has allowed him to gain a unique perspective of how tough it is to become champion.

“It’s amazing when you see my road in the UFC; I was up down up down and finally I’m on the top, so it’s an amazing journey for me,” Blachowicz told UFC.com. “It’s still not the end of the journey.”

Blachowicz actually was aware of what the next chapter in his journey would be less than 10 hours after defeating Reyes.

“After the fight I was on the plane coming back to Poland, I don’t know, 10 hours after the fight or so, and my fiancée is also my manager and she got a text from UFC asking if I wanted to fight Israel Adesanya in December,” Blachowicz recalled. “I say, ‘What? Come on, I have to celebrate right now. But OK, no problem, we can do this, but in March, because in December my son will be born.”

Moments after reading the text, Blachowicz stepped off the plane in Poland to be greeted by a crowd of supporters congratulating him. That type of reception is something that Blachowicz had envisioned for his entire UFC career and, for a brief moment, it allowed him to forget about fighting the man that headlined UFC 253.

A date was set for Blachowicz to defend his newly earned title against Adesanya at UFC 259 on March 6. Other fights on the card include Amanda Nunes vs Megan Anderson for the UFC women’s featherweight championship and Petr Yan vs Aljamain Sterling for the UFC bantamweight title.

UFC 259 will be just the seventh time in UFC history that three title fights will take place on one event. And it hyped Blachowicz up even more, knowing that he would be headlining such a stacked event.

But before he could get into full fight mode, Blachowicz had to focus his attention on his family and what they needed to do to prepare for the arrival of his first born.

Immediately following the birth of his son, Blachowicz went straight into fight camp. He slept in a different room from his fiancée Dorota Jurkowska and Jan Jr. and he relied on family and friends to help make the busy time as smooth as possible.

The royal line sustained 😁 The heir to the throne is with us!

Thank you Dorota, you are incredible! You are a better fighter than the UFC champion ;) Proud dad. #LegendaryPolishPower #longlivethefighters pic.twitter.com/99eQfFY4mY

“The first week I was thinking to myself how in the world are we going to be able to do this. After the fight I will take care of our son, I will not sleep, and she will sleep. It’s very hard work but it’s a great adventure,” Blachowicz laughed. “He motivates me to work harder and in Poland we say something like this: ‘When you become a father you hit twice as hard.’ So, Izzy, be careful.”

Adesanya’s move up to light heavyweight will be the first time that the middleweight champion has challenged for the light heavyweight championship. If “The Last Stylebender” can defeat Blachowicz, he would become the fifth simultaneous ‘champ champ’ in UFC history. It’s a fight that makes all the sense in the world for the superstar, but why does it make sense for Blachowicz?

The answer is simple. Blachowicz has worked his whole career for a big fight, and this is it.

“He’s a great fighter, 20-0, after our fight he’s going to have 20-1, but anyways he’s a great fighter with great skills so it’s a pleasure for me to fight with someone like Israel,” Blachowicz said of his UFC 259 opponent. “I’m 38 years old, so now it’s time for the big fight in my life because I’m almost finished. It’s now or never.”

Blachowicz fancies himself as a well-rounded fighter, but admittedly has a passion for unleashing the “legendary Polish power” in the stand-up game. Testing himself against a renowned striker such as Adesanya is something that excites him and also reminds him to use all the tools at his disposal.

"You're going to see legendary Polish power versus Nigerian power."@JanBlachowicz discusses his #UFC259 fight with Israel Adesanya, his @UFC career and recently becoming a father 🔊⬆️

“I like to strike, but this is MMA, so I’m going to use all tools that I got to win the fight. If I’m going to have the opportunity to take him down, I will do this,” Blachowicz said. “This is MMA, but for sure, my fight style is standup, and I’d like to try my standup skills on him.”

On Blachowicz’s eight-fight run to become champion, he finished five opponents, three by knockout and two by submission. These past bouts give Blachowicz confidence that he can adapt during the bout with Adesanya to put an end to his aspirations of becoming a double champ.

His long road to the top has also prepared his mind for the right mental approach heading into the biggest fight of his life.

“It definitely is [my biggest fight] but I don’t think like this; I just think of it as another fight, another job to do. I just want to have fun inside the Octagon and after the fight I will celebrate what I’ve done. I beat the champion; I defend my belt because I don’t want to put too much pressure in my head,” Blachowicz said of his mental approach to UFC 259. “When I fight against Dominick, I knew that it was a fight for the title, but in my head, I thought, ‘OK it’s just another fight, not for the title.’ But after the fight I knew ‘OK I’ve got the title.’ I do this because sometimes if there is too much pressure in your head you can’t have a good fight. This is my way, and it works.” 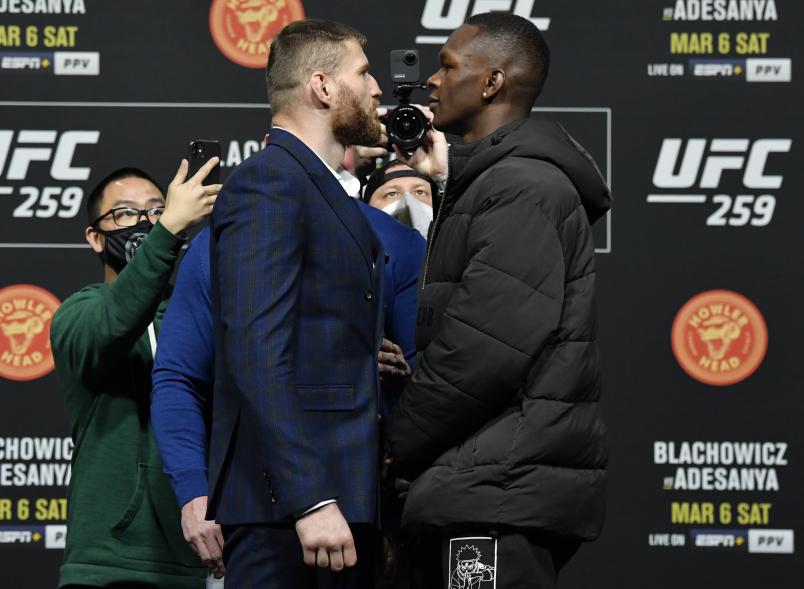 Jan Blachowicz of Poland and Israel Adesanya of Nigeria face off during the UFC 259 press conference at UFC APEX on March 04, 2021 in Las Vegas, Nevada. (Photo by Jeff Bottari/Zuffa LLC)

A few seconds go by before Blachowicz cracks a smile and adds why fight fans must tune into his bout with Adesanya.

“You’re going to see legendary Polish power versus Nigerian power, and this is something that you have to see.”

“Two great fighters meet together: two great champions and it’s just going to be a great fight. You’re going to see fireworks inside the Octagon.”

Make sure you tune into UFC 259 to watch the massive champion versus champion battle between Blachowicz and Adesanya. Order the main card on PPV on ESPN+ and on UFC Fight Pass.