See Which Fighters Made The Most Of Their Opportunity At UFC 258: Usman Vs Burns
By BY THOMAS GERBASI, ON TWITTER @TGERBASI • Feb. 15, 2021

Saturday’s UFC 258 event is in the books, and now it’s time to go to the scorecard to see who the big winners were at the UFC APEX.

As soon as Gilbert Burns rocked Kamaru Usman seconds into their UFC 258 main event, I thought to myself, “We jinxed Usman.” Why? Well, the last time we had the greatest welterweight of all-time conversation about someone not named Georges St-Pierre or Matt Hughes, it was before Tyron Woodley fought Usman in March 2019. Woodley lost that night, kicking off a three-fight losing streak. Fast forward nearly two years, and the pre-fight banter touched on Usman breaking GSP’s record for most consecutive welterweight victories and where he stood among the best ever. Then Burns staggered him, but Usman shook it off and then put on a dominant effort until he halted his former teammate in the third round. Best 170-pounder ever? Me, personally, I don’t like those conversations until a fighter retires, but if we’re going to have that talk, Usman’s name has to be there.

RELATED: Look At All The Results From Usman Vs Burns

When I make these lists up, I try to rank the fighters based on who the MMA world is talking about on Monday morning, and on this Monday, Anthony Hernandez is the talk of the town. Seemingly on the verge of a submission loss early in his bout against Rodolfo Vieira, Hernandez weathered the storm, put it on Vieira with his hands (and an elbow), and in the second round he submitted the world-class jiu-jitsu player. It was one of those victories (and comebacks) no one saw coming, but “Fluffy” pulled it off in style, proving once again that in combat sports, “that’s why they fight the fights.” 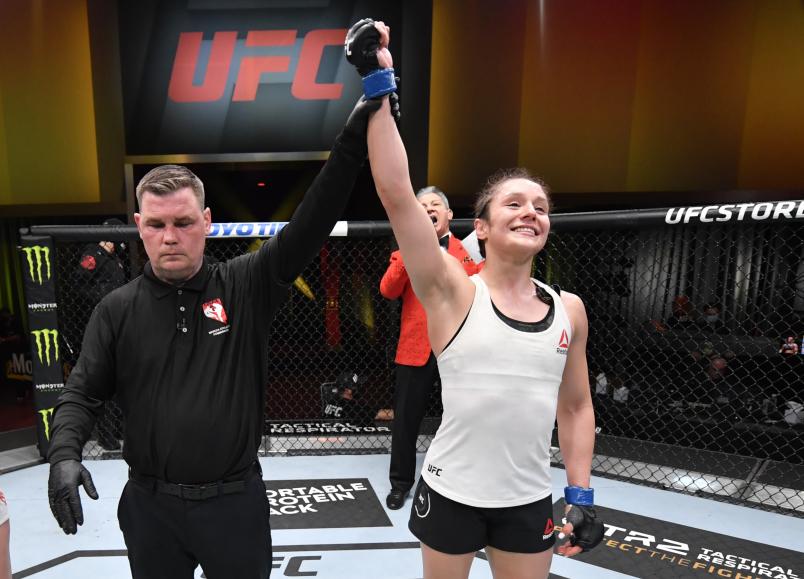 Alexa Grasso of Mexico reacts after her victory over Maycee Barber in their flyweight fight during the UFC 258 event at UFC APEX on February 13, 2021 in Las Vegas, Nevada. (Photo by Jeff Bottari/Zuffa LLC)

Another surprise on Saturday night’s card was Alexa Grasso’s clear-cut win over Maycee Barber. And even though oddsmakers had the Mexican contender as a slight favorite, most believed that after rehabbing a knee injury, Barber was going to get back to the business of becoming the youngest champion in UFC history. And while “The Future” still might get there, on this night in Vegas, it was Grasso putting in a complete performance as she delivered the biggest win of her pro career.

RELATED: Look At Every Scorecard From Usman Vs Burns

Numbers can be deceiving in all sports, and particularly in MMA, all three-fight losing streaks aren’t created equally. But 0-3 is 0-3, so Kelvin Gastelum needed a W in his main card bout against Ian Heinisch and he got it, putting on a disciplined effort for all three rounds. Was it the knock down, drag ‘em out fight we usually expect from Gastelum? No, but that wasn’t what he needed to win on Saturday night. He needed to stick to the game plan, nullify Heinisch’s offense and use his experience. Check, check, and check. Gastelum is still a player at 185 pounds.

With a 31-month layoff since his last trip to the Octagon, Julian Marquez had all the pressure on his shoulders as he returned to face Maki Pitolo at the APEX, and while he needed a finish heading into the third round to get his hand raised, he got it, and that W is all that matters to “The Cuban Missile Crisis,” who got a bonus and a social media exchange with Miley Cyrus to boot. Not a bad weekend.