See which fighters earned a bonus on UFC 256: Figueiredo vs Moreno
By Zac Pacleb and Gavin Porter, on Twitter @ZacPacleb/@PorterUFCNews • Dec. 13, 2020

The fighters of UFC 256 showed out in a big way in the UFC Apex, with seven of the ten fights coming to an end by knockout or submission. The standout performances made it tough to snag one of the Performance of the Night bonuses handed out by UFC President Dana White. 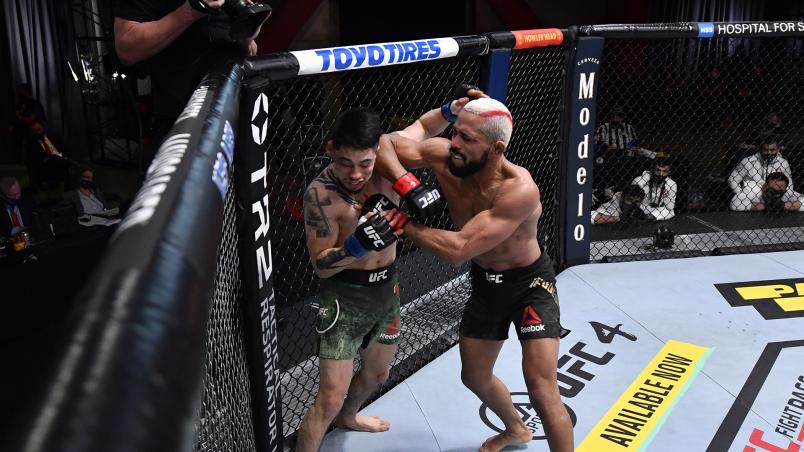 Fight of the Night

After much of the Fight of the Year conversation felt wrapped up in March after Zhang Weili and Joanna Jedrzejczyk went to war in March, Deiveson Figueiredo and Brandon Moreno threw their hat in the ring with a 5-round war in the final pay-per-view event of the year, ending in a majority draw, which keeps the flyweight title in Figueiredo’s possession three weeks after both men competed and won at UFC 255.

The judges scored the contest 47-46 for Figueiredo and 47-47 twice after the Brazilian was docked a point in the third round for an accidental groin strike.

Figueiredo got right back to work at the opening of the fight, pressing fast with a spinning kick and heavy punch before going for a takedown. Moreno reversed the action, gained control and started getting his own standup game going. “The Assassin Baby” scored well with his smooth boxing, but Figueiredo kept walking Moreno down and firing heavy punches, including to the body. The high pace continued well into the second round, and Figueiredo started to find a home for his right hand. Moreno scored a takedown, but Figueiredo scrambled to his feet and launched into a furious exchange. The challenger took Figueiredo’s shots well and stayed right in-range going blow-for-blow with the champion.

The third round kept the pace and tension high as Figueiredo searched for the knockout shot, but an errant low kick halted the action, and referee Jason Herzog decided to deduct a point from Figueiredo. Once the pause in action ended, the flyweights picked up where they left off and constantly attacked and scrambled in grappling exchanges. Moreno mixed up combinations to the body and head smoothly, and Figueiredo kept launching bombs of his own. The cadence of the fight continued into the fourth round, and Figueiredo scored an early takedown. Once Moreno got back to his feet, he tagged the champion with solid shots, which Figueiredo ate well.

In the final round, Figueiredo unleashed three heavy kicks to the body and head, and Moreno’s work rate dropped as it seemed like his left arm started to bother him. Even so, the shots kept coming from both ends, and Figueiredo secured a late takedown to get some control as the fight came to a close. Respect was earned on both ends and left many wanting a rematch as soon as both men are ready to go again.

Performance of the Night: Kevin Holland

No one had a better year in the Octagon than Kevin Holland and the “Trailblazer” capped off 2020 by knocking Jacare Souza out in spectacular fashion.

The fight started off at a furious pace, with Souza pouring on the pressure. The Brazilian took Holland down quickly, with Holland landing powerful strikes from his back. Holland was able to briefly get to his feet before Souza dragged him back down to the canvas. But then everything changed.

As Souza loomed in top-control, Holland landed a massive hook from his back which stunned Souza. Holland repeated the strike knocking Souza backward as he stood up and connect with power shot after power shot. Souza was out and the referee was forced to jump in before the long-time middleweight contender absorbed any more damage.

It was without question, the biggest win of Holland’s career and extended his win streak to five. No matter who is next for Holland it will be a fun one as big names are all in front of him.

Performance of the Night: Rafael Fiziev

It was statement time for Rafael Fiziev who faced a major step-up in competition against Renato Moicano at UFC 256. Fiziev passed the test with flying colors, looking explosive and violent in every exchange with the former featherweight stand-out.

Late in the first round Fiziev’s launched a three-punch combo going body-head-head that caught Moicano right on the button. As he crashed to the floor, the referee had seen enough, jumping between Fiziev and the reeling Moicano.

It was a massive victory for Fiziev, 9-1, and puts him in an excellent position heading into 2021.