UFC 255 Fighters On The Rise

Make sure you know which fighters to have your eye on at UFC 255: Figueiredo vs Perez
By E. Spencer Kyte, on Twitter @SpencerKyte • Nov. 15, 2020

UFC 255 touches down inside the UFC Apex this weekend and it should prove to be a pivotal night in both the men’s and women’s flyweight divisions.

Not only will champions Deiveson Figueiredo and Valentina Shevchenko defend their respective titles to close out the evening, but earlier in the night, top contenders on both sides of the roster will step into the Octagon looking to make their case for being deserving of the next championship opportunities.

As we ramp up to this weekend’s festivities, here’s a look at three surging competitors you should need to be paying close attention to on Saturday night.

It’s rare that someone slated to fight for championship gold lands in this space, but the circumstances surrounding Perez facing Figueiredo in this weekend’s main event warrant giving the challenger a little more shine.

When the champion was expected to defend his title against former bantamweight titleholder Cody Garbrandt, Perez was paired off with Brandon Moreno in a bout many viewed as a contest to determine the No. 1 contender in the division. Once Garbrandt was forced out of the main event pairing, Perez stepped in and will look to become the first Contender Series alum to claim UFC gold when he faces off with the newly minted champion this weekend.

Perez has gone 6-1 since earning his UFC contract with a first-round submission win over Kevin Gray on the first season of the Contender Series and carries a three-fight winning streak into Saturday contest. Last time out, the Team Oyama representative earned a first-round stoppage win over perennial contender Jussier Formiga, battering the Brazilian’s legs with punishing kicks to the point that he could not continue.

The flyweight division has been electric over the last couple of years and feels primed to continue being a hotbed of exciting action and impressive talents, and Perez should be one of the fixtures in the 125-pound ranks for years to come. He’s an impressive talent with varied, powerful striking and a sneaky-good submission game, and is more than capable of walking out of the Octagon as the new UFC flyweight champion on Saturday night. 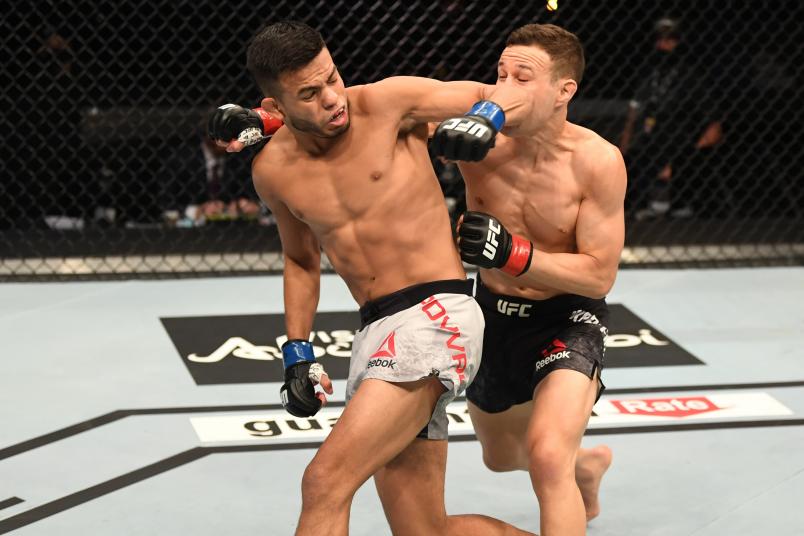 Royval has been one of the biggest breakout stars of 2020 thus far and has a chance to wrap up his rookie campaign in the UFC by staking his claim to a flyweight title shot next year with a win on Saturday night, as the 28-year-old Factory X Muay Thai representative squares off with Brandon Moreno.

The emerging flyweight contender cut his teeth fighting under the LFA banner, facing tough competition while compiling a 10-4 record through the end of 2019. In May, Royval stepped into the Octagon for the first time and submitted former flyweight title challenger Tim Elliott in an exciting back-and-forth contest that earned Fight of the Night honors, and then he followed it up with another second-round submission finish at the end of September when he choked out Kai Kara-France.

Now riding a four-fight winning streak (all finishes) and very much in the race for UFC “Rookie of the Year” honors, Royval looks for his third victory of the year as he steps in for Perez opposite Moreno on Saturday night.

This is the latest in a series of incremental steps up the competitive ladder for Royval, but the Marc Montoya-coached flyweight has yet to seem the least bit bothered by facing experienced, ranked competition to this point in his UFC journey.

He has excellent size for the division and scrambles well, as he showed against Elliott. Additionally, Royval sports a 91.7% finishing rate while never having been finished, meaning he’s not going to go away easily and if you make a mistake, he’s most likely going to make you pay.

If he can get by the durable and dangerous Moreno on Saturday night, Royval will head into next year as the clubhouse leader for the next championship opportunity in the 125-pound weight class. 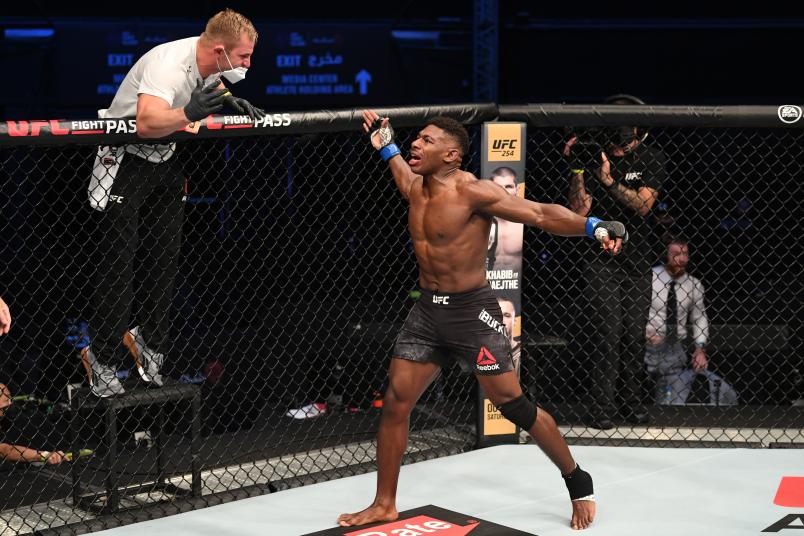 You may not know his name, but you’ve surely seen Buckley’s work inside the Octagon as the promising middleweight delivered the Knockout of the Year last time out against Impa Kasanganay.

The 26-year-old made his promotional debut on short notice earlier in the year, landing on the wrong side of a third-round stoppage result against streaking Contender Series grad Kevin Holland, but his performance against Kasanganay showed he was an intriguing addition to the 185-pound ranks.

Listen, anyone expecting Buckley to come out and replicate his incredible jumping, spinning back kick every time out is being unrealistic, but it’s the awareness, inventiveness, and ability to execute that maneuver that makes this weekend’s matchup against fellow striker Jordan Wright worth tuning in for on Saturday.

Most people aren’t capable of delivering a blow like that and fewer are willing to pull the trigger when the opportunity presents itself, but Buckley showed no hesitation, immediately spinning and elevating when Kasanganay caught his initial kick. The St. Louis native showed flashes against Holland — who has earned two more victories since then and is now slated to face Jack Hermansson in December — and looked outstanding in his sophomore showing, making his third appearance in the Octagon a must-see event.

The middleweight division has seen a tremendous influx of talent over the last year and the competition to make headway in the 185-pound ranks is serious, but Buckley is definitely one to keep an eye on going forward. His pairing with Wright should provide another opportunity to showcase his striking, and if he comes away with another impressive victory, Buckley will head into 2021 on a two-fight winning streak, staring down a bunch of opportunities in the talent-rich weight class.