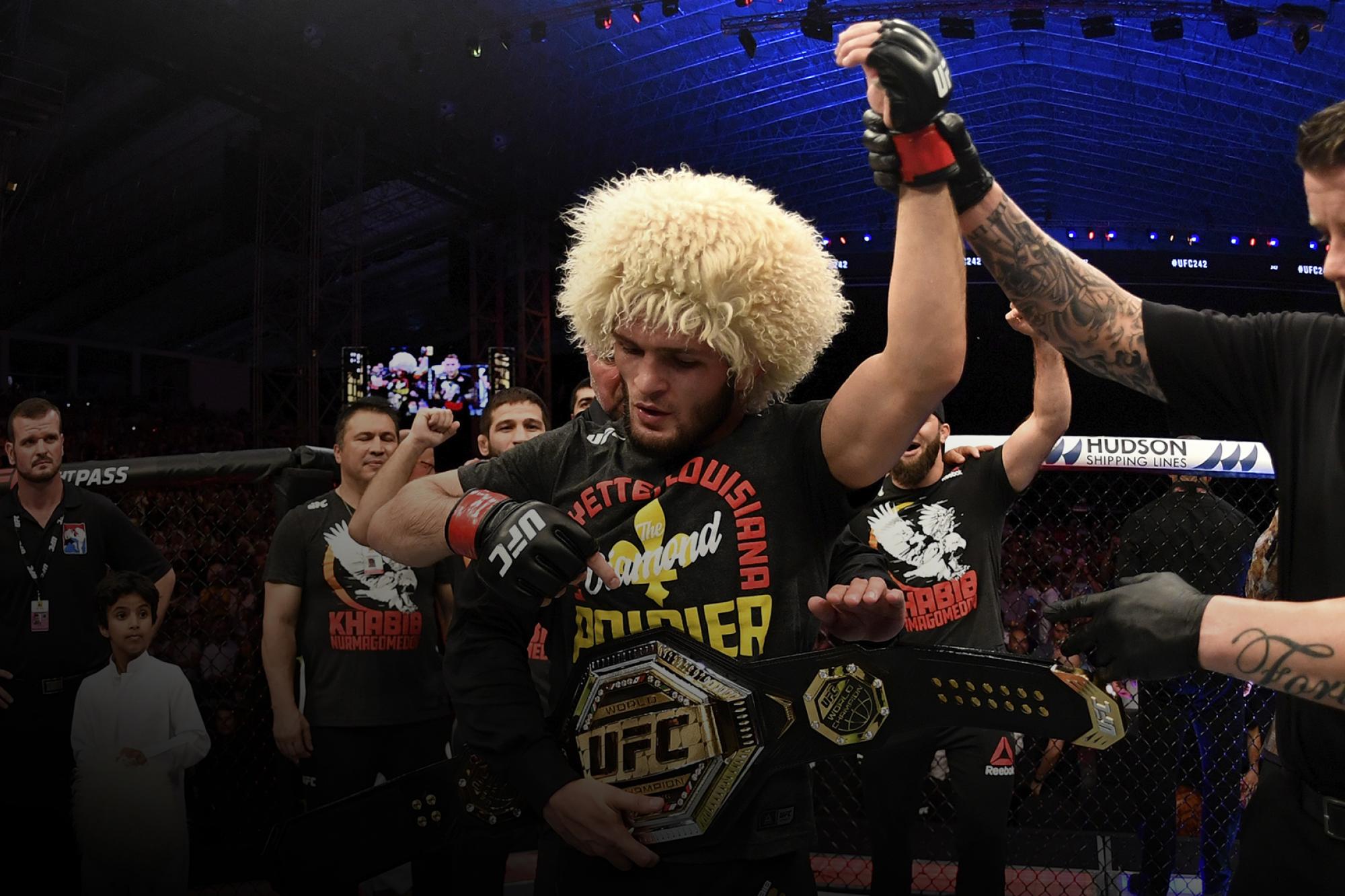 UFC 254 Where We Stand: Lightweights

The UFC lightweight belt is on the line in Abu Dhabi this weekend. See where the lightweight division stands before UFC 254: Khabib vs Gaethje
By Zac Pacleb, on Twitter @ZacPacleb • Oct. 19, 2020

While several weight classes might have claims to be the deepest or most interesting in the UFC, no other division is as high-profile both in and out of the Octagon as lightweight. Any time a top-tier matchup is announced at 155 pounds, it carries a sense of potential tectonic shifting with it. Sure, that sounds a little dramatic, but so is the division – in a good way.

From a dominant, undefeated champion in Khabib Nurmagomedov marching toward the Rushmore conversation with each brutal ground-and-pound strike to one of the biggest stars in the sport’s history in Conor McGregor and everyone in between, any mixture of matchups is worthy of all the hype and anticipation.

With the lightweight division in the spotlight as Nurmagomedov faces interim champion and all-action wrecking machine Justin Gaethje at UFC 254, we put the top of the 155-pound group under the microscope to see what is to come in the aftermath of this titanic headliner. 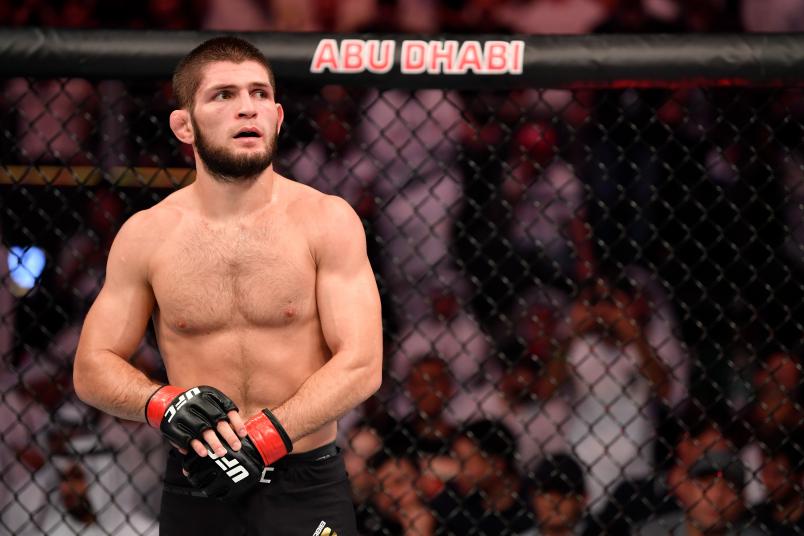 Khabib Nurmagomedov of Russia stands in his corner between rounds of his lightweight championship bout against Dustin Poirier during UFC 242 at The Arena on September 7, 2019 in Yas Island, Abu Dhabi, United Arab Emirates. (Photo by Jeff Bottari/Zuffa LLC

Outlook: The unblemished king hasn’t showed any real signs of weakness in the Octagon, mauling his way to a reign over what is debatably the sport’s most dangerous division. What marks his greatness so acutely is almost every moment of every Nurmagomedov fight looks similar as he engulfs his opponents with constant pressure and tenacious grappling. Should Nurmagomedov get through Gaethje, few fights are left for him. The cursed matchup with Tony Ferguson is as unlikely as ever after Ferguson fell to Gaethje, but many would still love to see one of the great “what ifs” in the sport come to fruition. There is also the teased legacy matchup with Georges St-Pierre. Nurmagomedov has expressed his interest in that fight as the one that could send him to a 30-0 record, and the possibility of retiring at that point is also something of intrigue. To that point, if this is the penultimate fight for “The Eagle,” a full, real-time appreciation of his march through the sport is in order. 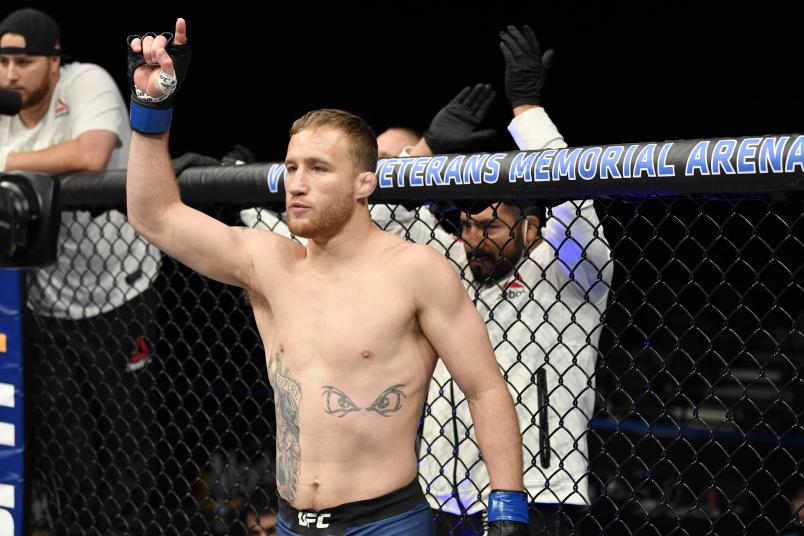 Justin Gaethje prepares to fight Tony Ferguson in their UFC interim lightweight championship fight during the UFC 249 event at VyStar Veterans Memorial Arena on May 09, 2020 in Jacksonville, Florida. (Photo by Jeff Bottari/Zuffa LLC)

Outlook: Your favorite fighter’s favorite fighter put together a masterclass of patient violence in his interim championship win over Tony Ferguson, tagging “El Cucuy” with clean, heavy shots while breaking down the man who seemed unbreakable. Gaethje’s maturity in his game is well-documented, and his ability to unleash bombs without taking too many himself has birthed the most interesting challenger to Nurmagomedov’s pursuit of perfection. His All-American wrestling pedigree is the matchup’s X-factor, and his one-punch power is the tension-maker. If Gaethje succeeds in the singular accomplishment of beating Nurmagomedov, plenty of fun fights await. Maybe there’s an immediate rematch with Nurmagomedov. He and Dustin Poirier could run back their classic 2018 bout from which Poirier came away victorious. Dan Hooker, Conor McGregor and Michael Chandler are all there, too. But before anyone gets ahead of themselves, Gaethje’s mountain of a Dagestani challenge awaits.

See which UFC 254 Fighters are on the rise 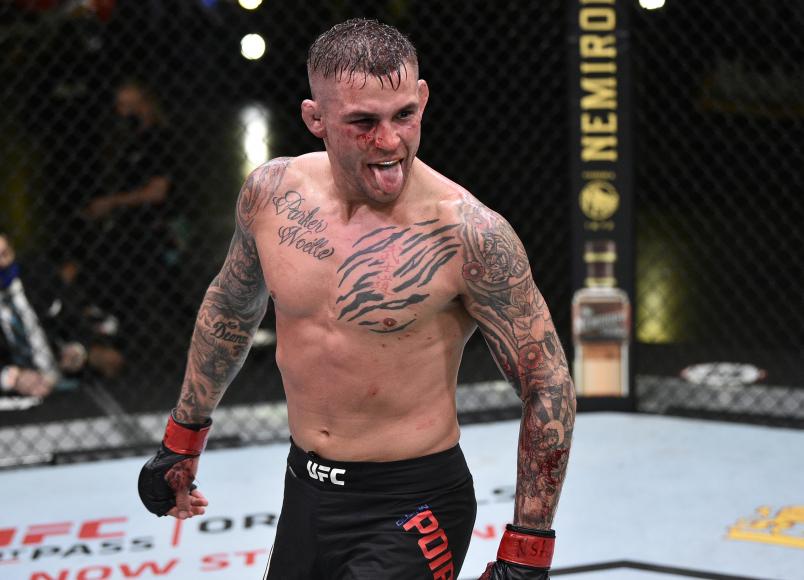 Dustin Poirier reacts after the conclusion of his lightweight fight against Dan Hooker during the UFC Fight Night event at UFC APEX on June 27, 2020 in Las Vegas, Nevada. (Photo by Chris Unger/Zuffa LLC)

Outlook: Poirier sent a huge reminder that he is very much in the elite class at 155 pounds when he took home a win in a Fight of the Year contender against Dan Hooker, but he is in limbo with Nurmagomedov on top. The best thing that could happen for “The Diamond” is a Gaethje win, since Poirier already holds a win over the interim champion, but the rematch on most minds is the one with McGregor. The two have respectfully bantered and negotiated a fight over social media. It’s a fun fight more than six years after their initial meeting in which McGregor halted his foe in the first round, but both acknowledge their respective growth – in the sport and beyond – and how a rematch interests them. Poirier also flirted with fighting Ferguson before that idea was scratched. While the Louisiana native has an uncertain future in terms of opponent, what is certain is his knowledge about his place in the sport and division, and his intention to take fights that respect that status. 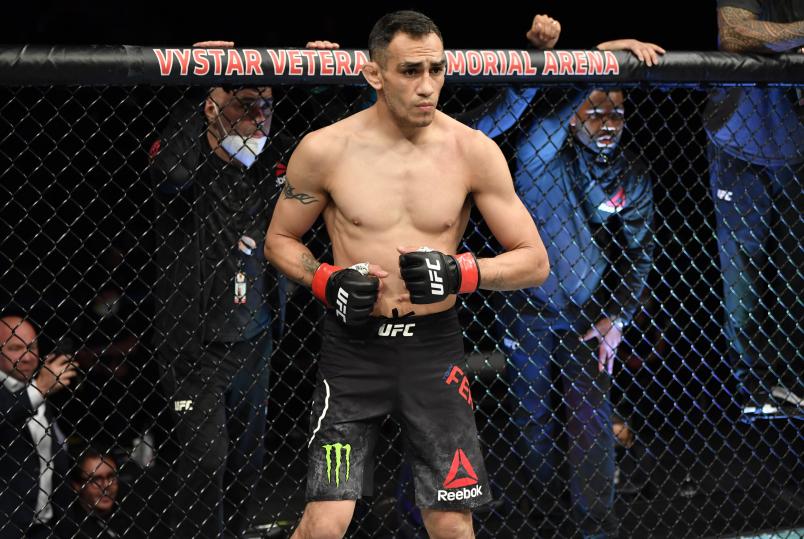 Tony Ferguson prepares to fight Justin Gaethje in their UFC interim lightweight championship fight during the UFC 249 event at VyStar Veterans Memorial Arena on May 09, 2020 in Jacksonville, Florida. (Photo by Jeff Bottari/Zuffa LLC)

Outlook: Even though his epic 12-fight winning streak came to a halt against Gaethje, Ferguson remains a major factor in the lightweight title picture. His journey back toward a potential title shot stumbled when a fight with Poirier fell through, and what’s next for “El Cucuy” isn’t all too clear at the moment, but the possibilities are rather endless. He hasn’t fought anyone in the division’s top nine other than Gaethje, and he still has as much of a case as any to have an inside track at UFC gold. It feels like the real factor is what opponent is the worthy adversary in Ferguson’s eyes, the one that moves him up the ladder he very well could’ve topped not long ago. 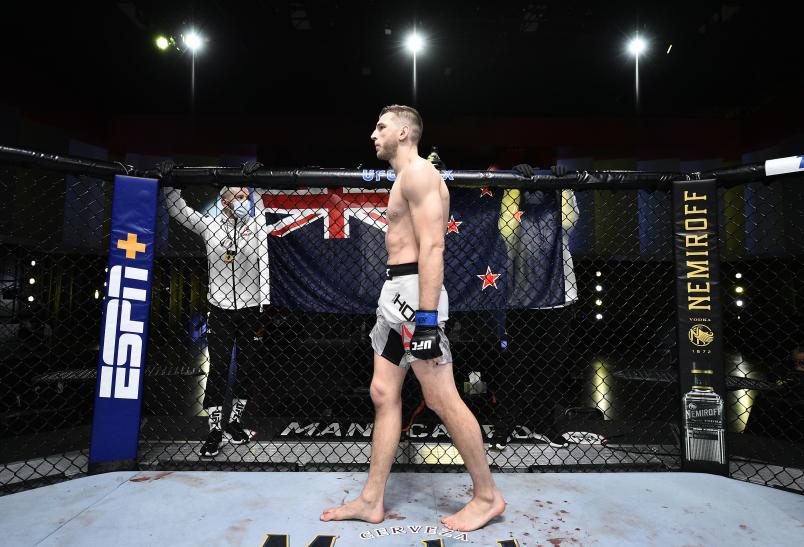 Outlook: Hooker’s audacious climb up the lightweight rankings came to a halt in his second top 5 fight of 2020 against Dustin Poirier, but in defeat, the New Zealander proved he is very much a real factor in the division. Since moving back up to 155, he is 7-2 with an abundance of fights there for him at the top. Although his bout with Poirier was all the proof really needed in terms of his legitimacy as a potential contender, he remains one of the smaller names among the division’s elite, so he could find himself in a bit of a no-man’s land without a clear avenue to get the fights that would propel him to a title shot, but that doesn’t mean he’s not worthy of those opportunities. 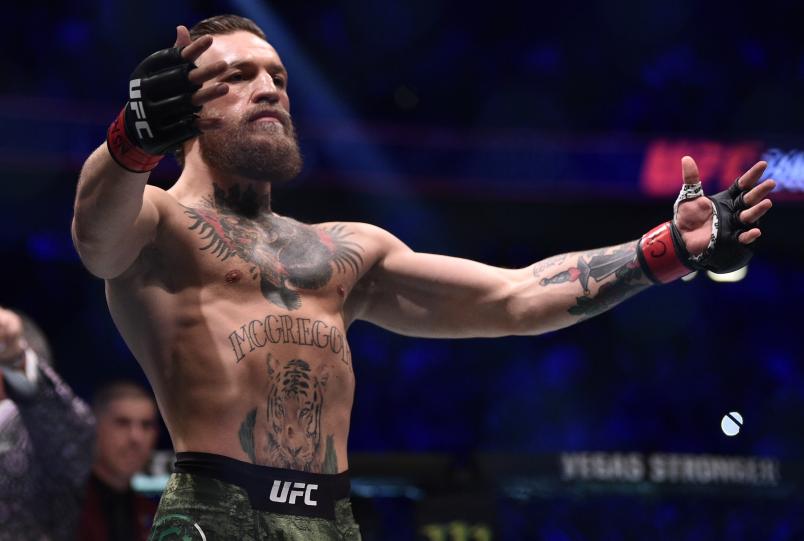 Conor McGregor of Ireland enters the octagon in his welterweight fight during the UFC 246 event at T-Mobile Arena on January 18, 2020 in Las Vegas, Nevada. (Photo by Chris Unger/Zuffa LLC)

Outlook: The sport’s biggest star – despite self-created retirement chatter – remains the biggest draw, biggest question mark and biggest headline maker in spite of large spans of inactivity. Although his 2020-opening win over Donald Cerrone was to start off a sort of “season” for the Irishman, the COVID-19 pandemic threw that for a loop. That said, McGregor has publicly laid out his interest in fighting Poirier, an enticing and potentially title shot-earning bout. However, as McGregor is one to do, he has also expressed an interest in fighting Manny Pacquiao in the boxing ring after his hypothetical fight against Poirier. As always, question marks circulate around McGregor’s next move. What is a simple truth is the sport is more interesting when he is active, and if a new McGregor fight night is in order shortly, he’ll only further cement that reality.

Outlook: As if lightweight didn’t already feel chock full of worthy title challengers, UFC made another fun addition to the weight class in former Bellator champion Michael Chandler, who will serve as the backup fighter for UFC 254’s lightweight title fight. The All-American wrestler out of Missouri holds wins over Eddie Alvarez and Benson Henderson, and potentially the best part of his existence on the roster is he hasn’t fought anyone in the top 5. The fights are there for him, and at 34-years old, he’s likely not looking to wait all too much. Among the rest, Charles Oliveira is on a seven-fight winning streak and fresh off a submission win – surprise, surprise – against Kevin Lee. He is on the outside looking in but remains as dangerous a finisher as anyone in the top 10 full of finishers. Paul Felder, despite teasing potential retirement after dropping a close decision in his Fight of the Year bid against Dan Hooker, has expressed an interest in fighting against foes who intrigue him and make sense. Among those, Michael Chandler likely stands out as the most enticing and a win-win of sorts – Felder gets a fun challenge and Chandler takes on a name UFC-centric fans know.