Saturday’s UFC 251 event is in the books, and now that the dust has settled on Fight Island, it’s time to go to the scorecard to see who the big winners were at Flash Forum.

Nearly lost in all the discussion about Saturday’s main card was Jiri Prochazka’s stirring UFC debut win over Volkan Oezdemir, and while the Czech Republic native had plenty of hype behind him (and rightfully so) leading into his clash with a top ten foe, being able to deliver on that hype with a highlight reel knockout puts his accomplishment in an entirely new light. Prochazka is an interesting addition to the 205-pound weight class, and while it remains to be seen if he has the goods to challenge Jon Jones for the crown, I get the feeling that it’s going to be a fun time finding out.

Like I mentioned earlier, the art of making adjustments is what determines who wins a fight between two elite-level competitors. Max Holloway looked like he was on his way to a shutout win over Alexander Volkanovski in their rematch after two strong rounds to start the fight, but the champion made his adjustments, and whether you believe he deserved the final verdict or not, you can’t argue that he switched up his game plan mid-fight and did what he needed to do to get back into it. So what would a third fight between the two look like? Just like the first two fights. And I wouldn’t mind seeing them throw hands again, but first, there are some other contenders waiting for their crack at Alexander “The Great.” 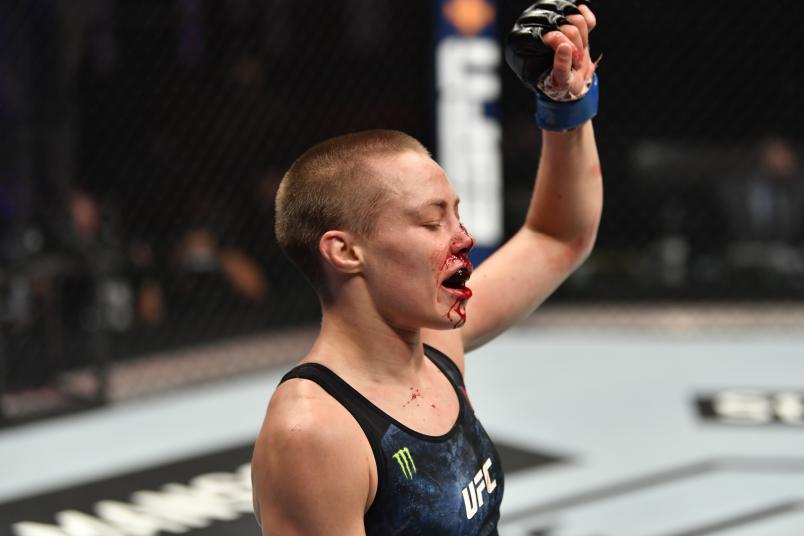 Rose Namajunas reacts after the conclusion of her strawweight fight against Jessica Andrade of Brazil during the UFC 251 event at Flash Forum on UFC Fight Island on July 12, 2020 on Yas Island, Abu Dhabi, United Arab Emirates. (Photo by Jeff Bottari/Zuffa

Before Rose Namajunas’ win over Jessica Andrade in their rematch last Saturday, a buddy of mine insisted that “Bate Estaca” was going to repeat her first win over “Thug Rose.” I tried to tell him that as emphatic as Andrade’s win was, Namajunas looked as good as she ever did before that ending in Brazil. In short, I told him this is as even a matchup as you will get, and these former strawweight champs made me look good as they battled for 15 minutes until Namajunas took a split decision win. It was a reminder that when Namajunas is on her game, she’s not only fun to watch but tough to beat.

On paper, UFC 251 was a special card, and in reality, it delivered. Maybe there weren’t 800 spectacular finishes or all-out wars, but for the true MMA fan, it had so many intricate strategic battles where top-level fighters were forced to adjust on the fly or get run over. In the first of three title fights, Russia’s Petr Yan showed that he is more than just a bulldozing force at 135 pounds as he fought a patient, yet punishing, fight against one of the greats in Jose Aldo. Keeping the heat on the Brazilian until he began to tire, Yan turned things up several notches when Aldo’s gas tank emptied, and the result was a fifth-round stoppage and a new world champion.

Sure, everyone wanted fireworks to end the historic UFC 251 card, especially given the circumstances that led to Jorge Masvidal getting his first UFC title shot against Kamaru Usman. It would have been the storybook ending for “Gamebred” to get into a firefight with Usman, end the fight in spectacular fashion, and walk off into the sunset with a belt, his robe and a slice of pizza. That’s in storybooks. In real life, styles make fights, and Usman did exactly what he needed to do to win the fight and retain the title. It was a smart fight and a dominant win for “The Nigerian Nightmare,” who is becoming scarier with each fight because he knows what it takes to defeat whoever challenges him for the belt. Whether it’s a slugfest and Fight of the Year candidate against Colby Covington or a grappling-heavy decision against Masvidal, Usman did what a champion does – adapt his game to his challenger.