LAS VEGAS - UFC® , the world’s premier mixed martial arts organization, today announced it will release its Emmy-nominated short film series, UFC 25 Years in Short, on YouTube . The docuseries, which had been exclusive to UFC FIGHT PASS® , will now be featured on YouTube, with films premiering every weekday through June 21.

The compilation of short films, which were created in celebration of UFC’s silver anniversary in 2018, present 25 captivating UFC stories, one for each year of the promotion’s existence. Many of the films were helmed by award-winning directors and producers, including several alums of ESPN’s landmark 30 for 30 film series.

“UFC 25 Years in Short” premiered on UFC Fight Pass in fall of 2018, so the time is right to showcase it to a new audience,” said Chris Kartzmark, UFC Senior Vice President of Production and Programming. “YouTube, which has a massive reach, offers the perfect platform for current fans and new fans to binge-watch these short films and catch up on UFC history in fun and unique way.”

Film #1 - OCTO: The Disputed Origin Story of the UFC Octagon In 1993, the UFC was born in an 8-sided cradle of combat, and promoters, TV producers, and Hollywood set designers still dispute who is the Octagon’s true creator.

Film #2 - THE LION’S DEN: The Story of the First Mixed Martial Arts Team In 1994, Ken Shamrock assembled the first ever MMA team, the Lion’s Den, and showed that success in the ultimate individual sport was a team effort.

Film #3 - ULTIMATE ACCESSORY: The Story of the UFC Championship Belt Since 1995, UFC belts have become the ultimate accessory prized by all MMA fighters, but their history is a little known, and often surprising, story.

Film #5 - JUDGEMENT DAY: The Story of the UFC Getting Run Out of Town When UFC 12 was set to take place in Buffalo in 1997, New York changed its laws to effectively ban MMA in the state for the next 20 years, leading the event to find a new home in Dothan, Alabama.

Film #6 - THE ICE AGE: The Story of Chuck Liddell, The First Mainstream UFC Superstar Chuck Liddell, who connected with knockout punches and with fans around the world like no UFC fighter before him, became UFC’s first true crossover superstar.

Film #7 - COUNTRY BOY CAN SURVIVE: The Story of Matt Hughes’ Fight for Survival Matt Hughes was a dominant UFC champion, but after his hall of fame career came to a close, he faced his toughest fight ever, this time, for his very survival.

Film #8 - COMBATANT IN CHIEF: The Story of Donald Trump’s History in Combat Sports When Donald Trump opened his Atlantic City casino to the struggling UFC, it was that start of an unlikely friendship between the current POTUS and UFC president Dana White.

Film #9 - THREE GUYS AND THREE LETTERS: The Story of the Fertittas & Dana White In 2001, the Fertitta brothers bought the failing UFC and installed Dana White as its president, setting the stage for the three friends to revolutionize combat sports forever.

Film #10 - BEFORE AND AFTER: The Story of Kevin Lynch’s Iconic UFC Photos In 2007, renowned photographer Kevin Lynch published a book of his iconic UFC photography that would dramatically reframe the image of the sport and its athletes.

Film #12 - BULLY PROOF: The Story of GSP’S Evolution from Bully Victim to UFC Badass As child, Georges St-Pierre was targeted by bullies until his father put him karate class, starting him on the path to becoming a fighting machine and a UFC champion.

Film #14 - THE O.G.S: The Story of UFC’s Octagon Girls With fashion model looks combined with girl-next-door appeal, Octagon Girls are great ambassadors for the brand and the sport, and they are UFC stars in their own right.

Film #15 - FINDING FORREST: The Story of Forrest Griffin, a True UFC Original In 2007, Forrest Griffin beat Shogun Rua in a major upset, one of the many times the original Ultimate Fighter beat the odds to build a Hall of Fame legacy.

Film #16 - BOUND BY VALOR: The Story of the UFC and the Armed Forces Connection In 2008, UFC held the first of many live events that raised millions of dollars to support military causes, part of the deep connection between UFC and the U.S. Armed Forces.

Film #17 - WORTH THE WAIT: The Story of Daniel Cormier In 2009, Daniel Cormier transitioned from Olympic Wrestler to MMA rookie, launching a second act in combat sports and a difficult journey to the top of UFC.

Film #18 - WE ARE LIVE: The Story of UFC Live Experience and Those Who Bring it to Life The UFC production crew has a distinctive broadcast style, unlike any other sports media presentation, creating the electric atmosphere that has shaped the UFC experience.

Film #19 - NEW YORK STATE OF MIND: The Story of the Fight for Legalization in New York State Misperceptions about MMA led to a ban in the state of New York, but the issue was hijacked by corrupt politicians with ulterior motives.

Film #20 - TAKE ME WITH YOU: The Story of a Little Boy and the UFC Heavyweight Champion In 2012, then-UFC heavyweight champ Junior dos Santos brought a nine-year-old boy from a nearby favela to Las Vegas for an unforgettable adventure. 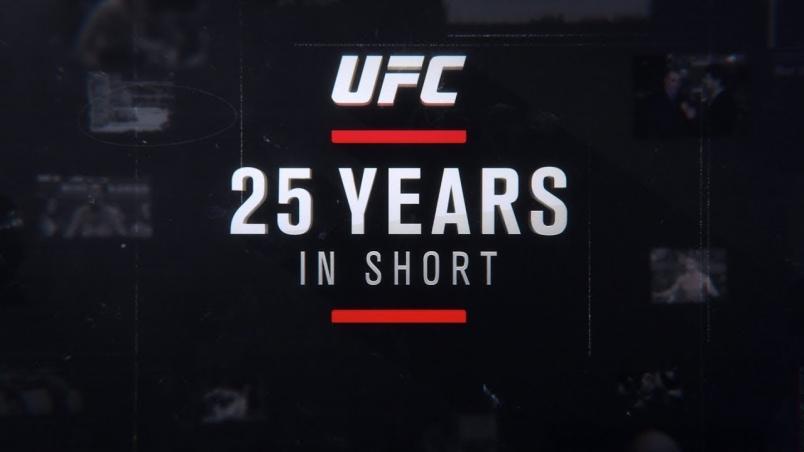 Film #21 - BREAKING BARRIERS: The Story of Ronda Rousey and the Rise of Women’s MMA Ronda Rousey’s run of dominance in the UFC captivated the public far beyond the sports world and blazed a trail for all female fighters to follow.

Film #22 - BAD BLOOD, GOOD BUSINESS: The Story of Rivalries Fueling the Biggest Fights In 2014, a brawl between Jon Jones and Daniel Cormier in the MGM Grand lobby led to one of the most successful Pay-Per-Views in company history because “bad blood” sells.

Film #24 - AGENTS OF CHANGE: The Story of the Biggest Deal in Sports History In 2016, UFC shocked the world when it sold to a group led by the superpower talent agency WME-IMG, now known as Endeavor, in the largest transaction in sports history.

Film #25 - MacMANIA: The Story of Conor McGregor’s Insane Star Power Conor McGregor’s skills as a fighter are undeniable, but he has emerged as a singular star and true original, without peer and without limits.