A look back at the career of "The Godfather of Ground-and-Pound," UFC Hall of Famer Mark "The Hammer" Coleman... 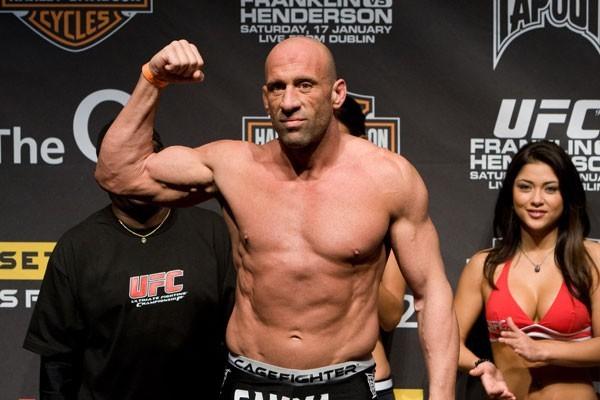 On November 3, Daniel Cormier defends his UFC heavyweight title for the first time against Derrick Lewis in the main event of UFC 230 in Madison Square Garden. It's a title with a storied history, one that all began with "The Hammer," Mark Coleman. As the UFC's 25th anniversary approaches, we look back at the career of the promotion's first heavyweight champ.

Mark Coleman was 31 years old. He had just finished a stellar amateur wrestling career that saw him win a NCAA Championship in 1988 for The Ohio State University, earn All-American status twice, and also compete for the United States in the 1992 Olympics. But the competitive fires still burned, and he had no idea where his athletic career was going to lead him.

Then he turned on the television and saw the Ultimate Fighting Championship.

“I was definitely at a crossroads,” said Coleman.  “With wrestling, there wasn’t a whole lot of pay involved, you were doing a lot for personal pride, and I was definitely not sure about what my future held.  That’s why it was so exciting when I saw the first UFC on TV.  I was immediately attracted to it and I knew immediately that it was what I was gonna do. The first time I saw it I thought it was the greatest thing I had ever seen in my life. And I didn’t think I was the only one thinking that way.”

He still had to fight though, and while adding striking to his wrestling wasn’t going to be the easiest thing to do, at least on paper, Coleman and his fellow wrestlers saw that as a mere formality, a minor detail on their way to greatness in the Octagon.

“Back in ’96, me and a bunch of wrestlers may have been naïve, but we just really believed that we were gonna get in there and win these things,” he laughed.  “I guess that was a good thing because confidence will take you a long way in this sport.”

Talent, athleticism, and unbelievable strength and technique doesn’t hurt either, and in Coleman’s UFC debut on July 12, 1996 in Birmingham, Alabama, he had it all in romping over Moti Horenstein, Gary Goodridge, and Don Frye in one night to win the UFC 10 tournament and become an instant star in mixed martial arts.  The Frye victory in particular was special to Coleman, who notes it as the highlight of his UFC career.

Just two months later, Coleman was back in the Octagon and he was even more impressive, beating Julian Sanchez and Brian Johnston in a combined 3:05 to win the UFC 11 tournament in Augusta, Georgia, and in February of 1997, he capped off his amazing run with a two minute 57 second win over UFC standout (and fellow Hall of Famer) Dan Severn to become the first UFC Heavyweight Champion.  And while the wins were impressive, Coleman was so dominating that many thought he would never be beaten.

“Growing up, I was a very shy kid and I didn’t like getting picked on, so I knew that I needed to get bigger and stronger because I didn’t want anybody to bully me around,” recalled Coleman.  “So when I got the opportunity to get in the UFC, it was neat how everybody was representing their individual sports, and I definitely wanted to get in there and prove to the world what kind of fighter a wrestler could be, and I did want to dominate, and I felt like I could dominate.  Unfortunately, I started reading too many quotes and I paid the price.  The reason I did so well in 10, 11, and 12, and in amateur wrestling was because I outworked my opponents.  I wasn’t used to the exposure and the fanfare, and I got caught up in it and started believing what I was reading too much, and it was a very humbling experience when I did finally lose.”

Coleman’s winning streak came to an end at UFC 14 when he was decisioned by Maurice Smith, and while he left the organization after subsequent setbacks at the hands of Pete Williams and Pedro Rizzo, you couldn’t keep ‘The Hammer’ down, and after a brief break, he traveled to Japan to compete in the PRIDE organization, where he resurrected his career.

In 2000, he defeated Masaaki Satake, Akira Shoji, Kazuyuki Fujita, and Igor Vovchanchyn in succession to win the PRIDE Grand Prix finals in 2000, re-establishing himself as one of the best heavyweights in the world in the process. Bouts against the likes of Antonio Rodrigo Nogueira, Fedor Emelianenko, Mirko Cro Cop, and Mauricio “Shogun” Rua followed, captivating the MMA world.

But his heart always stayed with the UFC.

At UFC 82 in March of 2008, Coleman had his chance when he was inducted into the UFC Hall of Fame, with the ceremony coming in his beloved hometown of Columbus.

“My first question was to make sure it was actually true,” he said.  “I can’t exaggerate how good a feeling it was to get that phone call.  I was stunned and at a loss for words, and as far as my athletic career goes, other than actually competing, it was definitely the greatest day I ever had. A lot of times, life is about being in the right place at the right time and sometimes you have to get lucky.”

Later on the night of his induction, he made the announcement that he was returning to active duty in the Octagon. His intentions were made clear from the start.

“I’m the Hammer and I have been around a long time,” said Coleman. “I said back in 1996 that I’m gonna be around for a long time and I’m still here. There are a lot of people that probably wish I wasn’t still around, but that’s too bad for them. I’ll let them know when I’m ready to quit.”

In his first bout back, at UFC 93 in January of 2009, he lost a Fight of the Night battle via third round TKO to Rua in a rematch of the 2006 PRIDE fight won by Coleman. But less than six months later, Coleman returned and showed off the moves that earned him the title of “Godfather of Ground and Pound” as he won a three round unanimous decision over Stephan Bonnar.

“No doubt about it, there was a lot of pressure on me for the Bonnar fight, but that’s what being an athlete and a competitor is all about,” he said. “You’ve got to be able to deal with the pressure and that’s something I think I’ve been able to do pretty well over the years. I definitely knew how much was at stake against Bonnar.”

Coleman would lose his last UFC bout via submission to Randy Couture in February of 2010, but he will forever remain the prime “Hammer” in the eyes of his legion of fans.

“I have always fought for the fans and I appreciate anyone out there who wishes me well and who was pulling for me,” said Coleman.  “I hope I’ve treated the fans with respect.”

As for the warriors of the Octagon, they all owe a debt to Coleman, one of the sport’s true innovators for his ability to translate wrestling into mixed martial arts success.

“I’d like to think I’ve had some influence on some guys,” he said.  “I don’t really sit back and think about it too much, but just the response I’ve received from all the younger fighters makes me feel good and I’m just really glad I could be part of taking the whole sport to the level where it’s at right now, which to me is just unbelievable.”

This profile was excerpted from the UFC Encyclopedia.