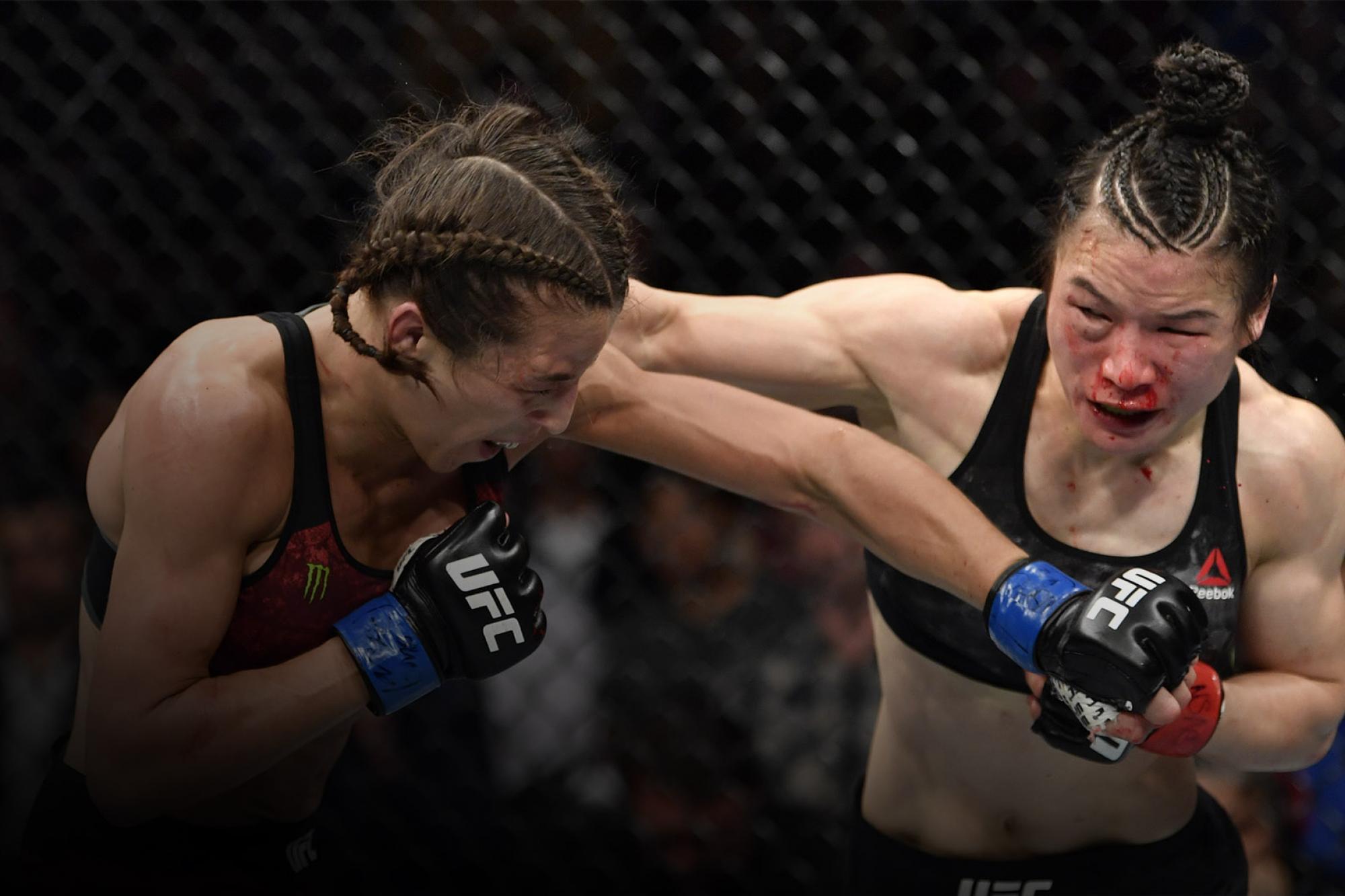 Recap the big winners from UFC 248
By Zac Pacleb, on Twitter: @ZacPacleb • Mar. 8, 2020
Fight of the Night
Zhang Weili vs Joanna Jedrzejczyk

It’s not hyperbole to call the strawweight title fight between Zhang Weili and Joanna Jedzejczyk the greatest fight in women’s MMA history and one of the greatest fights in MMA history full-stop. The bout was mixed martial arts at its highest level as both women showed technique, power and toughness for a full 25 minutes.

The pace to start the fight set a high bar that both women kept raising, with each fighter firing combinations inside the pocket regularly. Jedrzejczyk landed the first significant strike by way of a right hand, and she looked like she found her rhythm quickly in the opening frame. Zhang wasn’t without her own success, throwing heavy shots that clearly caught the attention of the former champ.

In the third round, Jedrzejczyk mixed things up and went southpaw, which seemed to swing the momentum her way until the fight moved to the fence with both fighters having their stints of control. Although it seemed like Zhang was slowing down, she shook Jedrzejczyk with a clean right hand to the jaw. Zhang continued to catch Jedrzejczyk’s kicks and fire counters to  Jedrzejczyk’s forehead, which started to significantly swell as the fight wore on. As the bout moved into the championship rounds, the crowd showed the athletes their appreciation.

Hear from the combatants of the best women's strawweight title bout in history.

The fourth round saw the same pace as the previous three as they continued to unleash combinations with plenty of heat behind them inside the pocket. Jedrzejczyk’s patented cardio was on display, appearing the sharper of the two in the fourth round, but to her credi, Zhang kept applying the pressure while firing powerful striked. Although Jedrzejczyk peeked at the clock, it didn’t appear that either fighter would fade or be finished.

To everyone’s admiration, the pace in the fifth round was near-identical to the opening round. Zhang connected with a strong left hook that appeared to shake Jedrzejczyk significantly, but it only seemed to inspire Jedrzejczyk to charge forward with more conviction. She connected with a few flurries of her own, and after the two clinched for a moment, they let everything go with the title in the balance. Jedrzejczyk landed a spinning backfist, and Zhang countered with another heavy blow.

The crowd gave the athletes a standing ovation for the bout, in which Zhang came away victorious by a split decision. Everyone knew they’d witnessed something special, and without a doubt the leading candidate for the Fight of the Year.

Hear from the Suga Show following his triumphant return to action

Performance of the Night
Sean O’Malley

The Sugar Show came back in style and better than ever as Sean O’Malley ended his first fight in two years inside the first round against Jose Quinonez.

O’Malley immediately got to work, landing a strong front kick to the body, and when Qunionez tried to return fire, O’Malley countered and landed a right head kick. An uppercut followed, and after some ground-and-pound, the comeback was complete. O’Malley is a bantamweight prospect with as much talent and hype around him as any, and he reasserted the fact that the buzz is well-earned.

Hear what Beneil Dariush had to say after an amazing KO victory over Drakkar Klose at UFC 248.

Beneil Dariush earned his fourth straight win by way of a stunning knockout of Drakkar Klose in the second round of the fight.

After spending the first round mostly on Klose’s back fishing for a rear naked choke, he and Klose engaged in an absolute slugfest. Klose attacked urgently, and though he had success, he came forward recklessly, and Dariush took advantage. He countered with a right hand that wobbled Klose, and after a rush, Dariush connected flush with a left hand and ended the fight a minute into the second round.