See what Jon Jones, Dominick Reyes, Valentina Shevchenko and Katlyn Chookagian had to say at the start of fight week.
By E. Spencer Kyte, on Twitter @SpencerKyte • Feb. 3, 2020

Splitting the duos up and giving them each a 30-minute window to field questions not only brought each title matchup into greater focus individually, but it also highlighted the dramatic differences between the two sets of competitors set to face one another inside the Octagon on Saturday night at Toyota Center in Houston, Texas.

While the oddsmakers see a massive disparity between the ladies poised to square off in the co-main event this weekend, the similarities between the two were clear during Monday’s call, as both champion and challenger remained focused on the task at hand and the lifetime of effort that went into each of them arriving at this point in their respective careers.

“First of all, I’m focused on my fight Saturday night and I’m not thinking about any further fights,” said Shevchenko, batting away a question about potential matchups outside of the flyweight division in the future. “I put everything inside of myself into this fight on Saturday.”

The 31-year-old titleholder, who claimed the vacant flyweight strap with a unanimous decision win at UFC 231 and defended the belt twice last summer, referenced beginning her martial arts journey early in life on multiple occasions, explaining that everything that predated her arrival in the UFC helped prepare her to hit the ground running when she initially stepped into the Octagon.

“I’m not a person who just started (competing) and suddenly received all this talk and doesn’t know how to deal with this,” said Shevchenko, who held multiple kickboxing titles and an 11-1 record prior to making her promotional debut in December 2015. “I was prepared for this mentally and physically since my childhood.”

Though they hail from very different regions, Chookagian’s path to the premier mixed martial arts organization in the world is actually quite similar to that of her opponent on Saturday night. Like Shevchenko, the challenger started doing karate at a very early age and has continued expanding her martial arts repertoire ever since, always with the same focus in mind.

“When I started MMA, I didn’t even know there were going to be women in the UFC, but I knew I wanted to be the best,” continued Chookagian, who enjoyed an undefeated rise through the regional ranks and carries a 13-2 overall record into this weekend’s co-main event. “It’s been a life-long goal of mine to be the best in the world, and I’m five days away from reaching that goal. It’s not just the hard training I’ve put in for this specific fight camp — this the hard training I’ve put in my whole life training martial arts — and now it’s paying off.”

Where the women who will share the Octagon in the co-main event shared comparable stories discussing their route to Houston’s Toyota Center, the messaging coming from UFC light heavyweight champion Jon Jones on Monday’s call was clear: this is a big deal and something new for challenger Dominick Reyes, but old hat for me.

“My opponent can say that he’s comfortable and not nervous, make people believe whatever, but I know deep down inside, he has to be; absolutely,” Jones responded when asked if his experience in championship fights and main events gave him a distinct edge over Reyes on Saturday night. “Not only is he fighting in the main event, he’s getting more attention than he ever has before, everybody is rooting for him back at home, and that causes tons of pressure.

“But I started doing this when I was a kid; I’ve been doing this since I was 20 years old,” continued Jones, who first claimed the UFC light heavyweight title at age 23 and has largely remained at the top of the division ever since. “For me, it truly is another day at the office. I don’t believe any fight is a big fight — it’s just another fight — but for my opponent, this is a very big fight.”

After spending the initial build-up to this contest poking at Jones through social media and during their initial press conference meeting several months ago, Reyes was decidedly low key on Monday afternoon, offering short, concise answers that highlighted his approach of keeping everything in perspective as he readies to challenge for championship gold this weekend.

“I just take every day as it comes, man,” said Reyes when asked about the increased attention and obligations that come with being in a fight of this magnitude. “You could worry about it and all those things, but it’s one thing at a time; one step at a time. We used to say when I was in college, ‘When the road ahead seems daunting, take a breath and focus on the next step’ and right now, I’m on this call.” 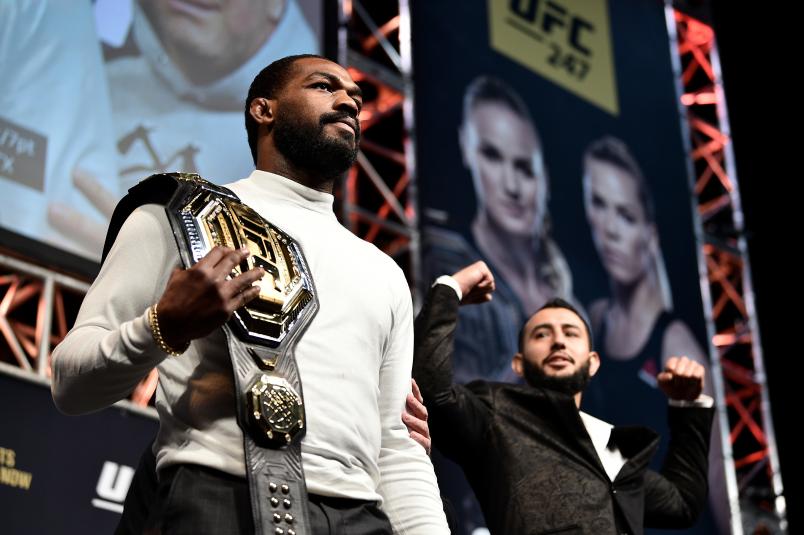 Jon Jones and Dominick Reyes face off during the UFC 247 Press Conference at T-Mobile Arena on December 13, 2019 in Las Vegas, Nevada. (Photo by Chris Unger/Zuffa LLC via Getty Images)

While Jones has been a dominant force atop the division for much of the last 10 years, Reyes has risen through the ranks quickly and impressively to land opposite “Bones” inside the Octagon this weekend.

Although he made his professional debut at the end of 2014, Reyes only started fighting with any frequency in late 2016. He was in the UFC nine months later, justifying the hype that accompanied his arrival by rattling off three finishes over the next 12 months to establish himself as an emerging threat in the 205-pound ranks.

Now, 32 months after stepping into the Octagon for the first time, he’s set to challenge for championship gold on Saturday night against arguably the greatest fighter of all time.

“I wouldn’t say it’s been a whirlwind,” said Reyes, when asked about his expedient rise through the ranks. “I’m living every day accordingly and whatever happens on a daily basis, I react to it and that’s how it goes. I don’t really look back very often to when it all started, but yeah, it did happen fast, but I think that’s a testament to my hard work and attention to detail.

“It’s to be expected — I’m fighting Jon Jones; he is who he is until he isn’t,” offered the challenger in response to a question about being the underdog and potentially overlooked heading into this weekend’s headliner. “He’s a great champion. If I wasn’t the underdog, that would be pretty crazy; that would be odd.

“It’s to be expected. It is what it is and everything is going pretty much exactly as it should be at this time.”