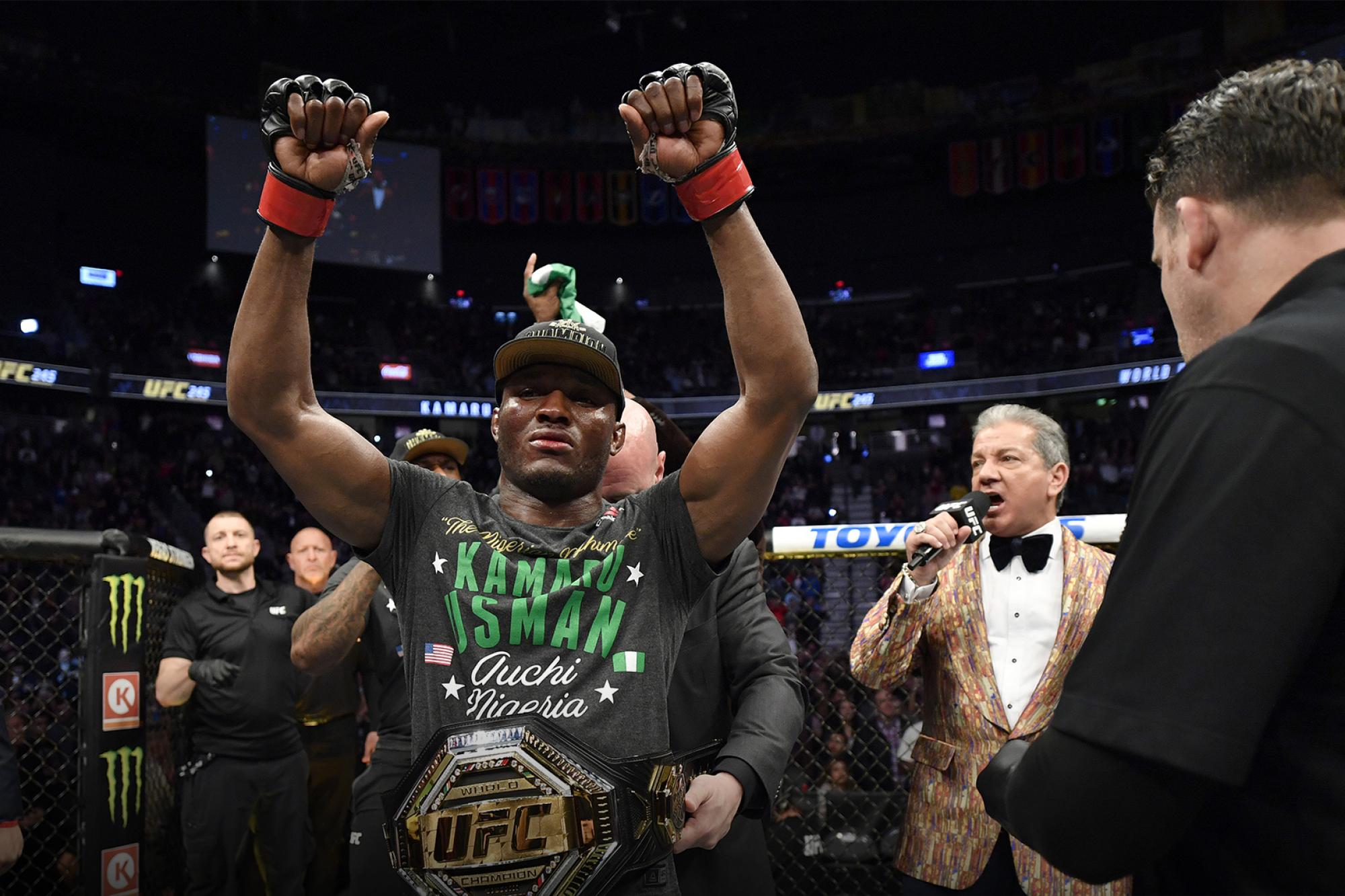 Talking points and bonus coverage from UFC 245: Usman vs Covington
By Steve Latrell, on Twitter: @TheUFSteve and Zac Pacleb, on Twitter: @ZacPacleb • Dec. 15, 2019
Fight of the Night
Kamaru Usman vs Colby Covington

The sneaky truth beyond all the trash talk and venom heading into the welterweight title fight was that Kamaru Usman and Colby Covington was a picture-perfect matchup. Arguably the two best wrestlers in the division decided to attempt a grand total of zero takedowns, opting to settle things with their fists and feet. The two traded turns rocking each other and finding their own bouts of momentum and adversity alike.

Early, Covington ramped up the pace and pressure, but Usman stood there and returned fire, finding plenty of success with front kicks and right uppercuts to the body. After the third round, Covington said Usman broke his jaw with a right cross, but he turned it up in the fourth round enough to make the fight dead-even heading into the final round.

With the fight in the balance, Usman showed his championship fortitude and dropped Covington twice with a pair of right hands. He followed the second knockdown with a flurry, and while Covington tried to tie Usman up, Usman’s pressure was enough to earn the stoppage and put a stamp on what was an instant classic of a title fight.

Performance of the Night
Irene Aldana

Irene Aldana spoiled the return of Ketlen Vieira with a masterpiece of a left hook that knocked out the previously undefeated Brazilian late in the first round. For her part, Vieira looked amazingly crisp for her first fight in a year and half. But in choosing to stand and trade with the increasingly dangerous Aldana, she marched right into the Mexican battler's wheelhouse.

With his sixth consecutive victory, Petr Yan now owns the longest winning streak in the bantamweight division, and he did it with an artful head kick KO of Urijah Faber. While Faber had some inspiring underdog moments, the contest was all Yan. Toying with the veteran throughout, the performance rockets him into the conversation for a title bout.

Amanda Nunes’ latest title defense may not have been the prettiest or easiest of her career, but it put her grit and cardio on display for a full 25-minute domination of Germaine de Randamie.

The first round was vintage Nunes, and her ground and pound was so brutal the fight might have been called without raising many eyebrows.

For her part, GDR lived up to her "Iron Lady" nickname, absorbing everything the champion had to throw at her, both on the feet and on the ground. But despite a strong second round, and a near submission in the fourth, Nunes’ smothering grappling was the story of the fight. Keeping her opponent flat on her back for the majority of the tilt, the effort was more than enough to continue her reign as the G.O.A.T. of women’s MMA.

“The Great” proved he is The Best after taking down featherweight king Max Holloway methodically over the course of a five-round masterpiece. Volkanovski made his money early with leg kicks, compromising the chamipon’s lead leg and forcing him to switch stances for a good portion of the fight. Volkanovski’s cardio held up as well as he said it would, and when Holloway pressed forward with his patened pressure, the Australian was right there to answer back and add something at the end. It was a virtuoso performance and a wonderful cap to the year for City Kickboxing, a team that is unquestionably one of the biggest players in the MMA world.

Dana White’s Contender Series standout Geoff Neal made it seven in a row at welterweight, and  he did so in spectacular fashion. In a mere 90 seconds, he handed the usually-durable Mike Perry the first KO defeat of his career. Rocking Perry with a blistering left head kick, the punches that followed seemed almost like a formality.

Punahele Soriano made an emphatic statement in his UFC debut, knocking out Oskar Piechota in the first round. The very same fighter who had convinced himself he hadn’t won a contract on Dana White’s Contender Series continued his undefeated ways with a sinister left hand that shut off the lights of the Polish native and opened the UFC 245 event with a bang. “The future is bright,” he would say backstage. Indeed.