The first meeting between the men who will headline UFC 242 on September 7 in Abu Dhabi took place on Wednesday in London, England, as Khabib Nurmagomedov and Dustin Poirier sat down with the media to discuss their upcoming lightweight title unification bout.

While some press events can get heated as the bad blood and trash talk overwhelms the moment, Wednesday’s affair was relaxed and measured, as neither man was interested in running down the other or trying to ignite a feud that doesn’t exist, not because they can’t, but because it’s unnecessary as the main event of the UFC’s return to Abu Dhabi is already a massive fight that will send shockwaves throughout the lightweight division and beyond.

“I’ve said it before,” began Poirier, pointing to the UFC championship belt positioned in front of him, “this here is a piece of the world title and that over there (points to Khabib’s belt) is the world title, and I just want to do the most in training camp and in my life to be ready for that moment.

“It’s been a long road — a lot of ups and downs — but now we’re at the pinnacle, headlining a show in Abu Dhabi against an undefeated guy. I’m excited for the opportunity to show the world what I’m capable of and I want to represent myself and the work that I’ve put into this sport on September 7.”

Where Poirier has been gunning for this opportunity since returning to the lightweight division four years ago, Nurmagomedov admitted that it has taken a little more for him to get up for this matchup.

“This fight is a little different because for this fight, I have to find a big motivation because it’s not a big fight like Conor,” he said, referencing his mega-fight with Conor McGregor last October at UFC 229. “But it’s my second title defense. He’s my opponent, I have to keep building my legacy and I have to keep going.”

Legacy was a key talking point for Nurmagomedov throughout the press conference, as the undefeated champion was asked several times about other possible matchups and laid out the collection of opponents he believes he needs to beat in order to cement his status as the best pound-for-pound fighter of all time.

“Honestly, I don’t know about whether he’s going to come back or not,” Nurmagomedov said when asked about a potential bout with former two-division world champion Georges St-Pierre, who mentioned a potential showdown with the undefeated Dagestani juggernaut prior to announcing his retirement from the sport earlier this year. “But if I want to make my legacy big, I have to beat Dustin, I have to beat Tony Ferguson and GSP and then I can become the pound-for-pound No. 1 fighter. This is my opinion.”

While Nurmagomedov was thinking long range, Poirier was focused on the here and now, preparing himself for the immense challenge he faces on September 7 at UFC 242.

Asked about what he needs to do in order to become the first man to beat Nurmagomedov, who will carry a sterling 27-0 record into the Octagon, the battle-tested veteran gave a thoughtful answer that highlights just how much he’s matured as both a fighter and a man over the last several years.

“A lot of people have been asking me about where do I see weaknesses in his game or where do I think he makes mistakes,” began Poirier, who has won four straight and is unbeaten in his last six heading into the title unification bout in September. “But I’ve kind of been sitting back, talking to my coaches about this, but I don’t really need him to be weak for me to be strong.

“I don’t need huge, glaring holes — I’m going to create them with my pressure, my Fight IQ, my experience and the amount of rounds and years I’ve been doing this.

“He’s good and I can’t sit up here and say anything bad about the guy,” he added later in the event, circling back to his thoughts on Nurmagomedov and how he becomes the first man to beat him. “But I’m going to make things happen in there and bring him to places that he’s never been in there.” 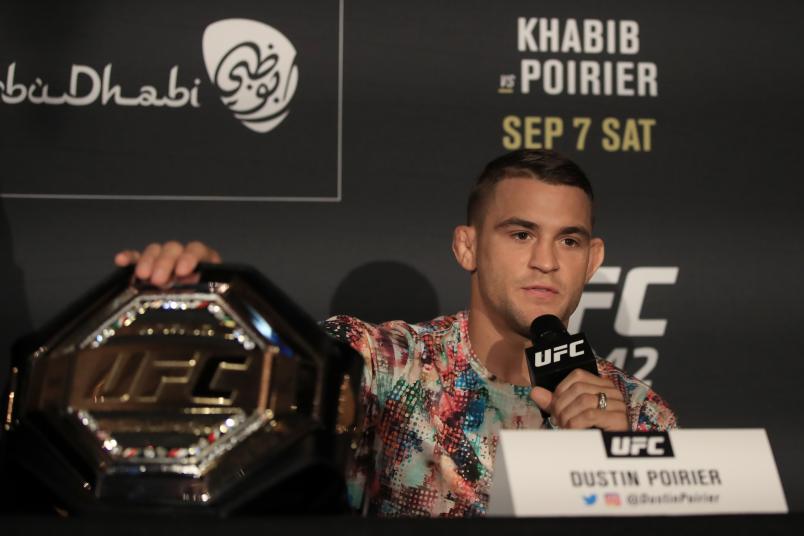 Although there were no instances of outright trash talk between the two respectful, accomplished veterans, that doesn’t mean that Wednesday’s press engagement didn’t come and go without anyone throwing a little shade.

When asked about testing his striking skills with a patient, educated boxer like Poirier, Nurmagomedov made sure to point out that he’s already been in the cage with a handful of the best strikers the division has to offer and handled them with relative ease, including a couple who have previously gotten the better of his UFC 242 opponent.

“I (have tested) myself (against) the best strikers in the world — Edson Barboza, Michael Johnson, Conor (McGregor). They’re all very good strikers; I think half of them already finished Dustin,” said Nurmagomedov. “They’re really good fighters, I think? I’ve already tested myself against a lot of really good strikers and Dustin is one of them.

“Of course I’m going to stand up too — this is not a wrestling match or grappling match; this is MMA — but my boxing is good too. I respect his game, I respect his boxing, but September 7, I have to do my job, like always.”

With just under three months until UFC 242, there is still plenty of time to get all the way fired up for what is sure to be an electric evening inside the Octagon in Abu Dhabi.

This is an incredible matchup between two superstar talents and the kind of fight that doesn’t need a rivalry or forced trash talk between two respectful fighters in order to make it appealing.

If you’re not convinced, Poirier laid out the stakes and what makes this bout so compelling perfectly on Wednesday.

“It’s going to be a very high-level fight between two guys on the pound-for-pound list; one of them is undefeated. Two champions are going in and one champion is coming out.”