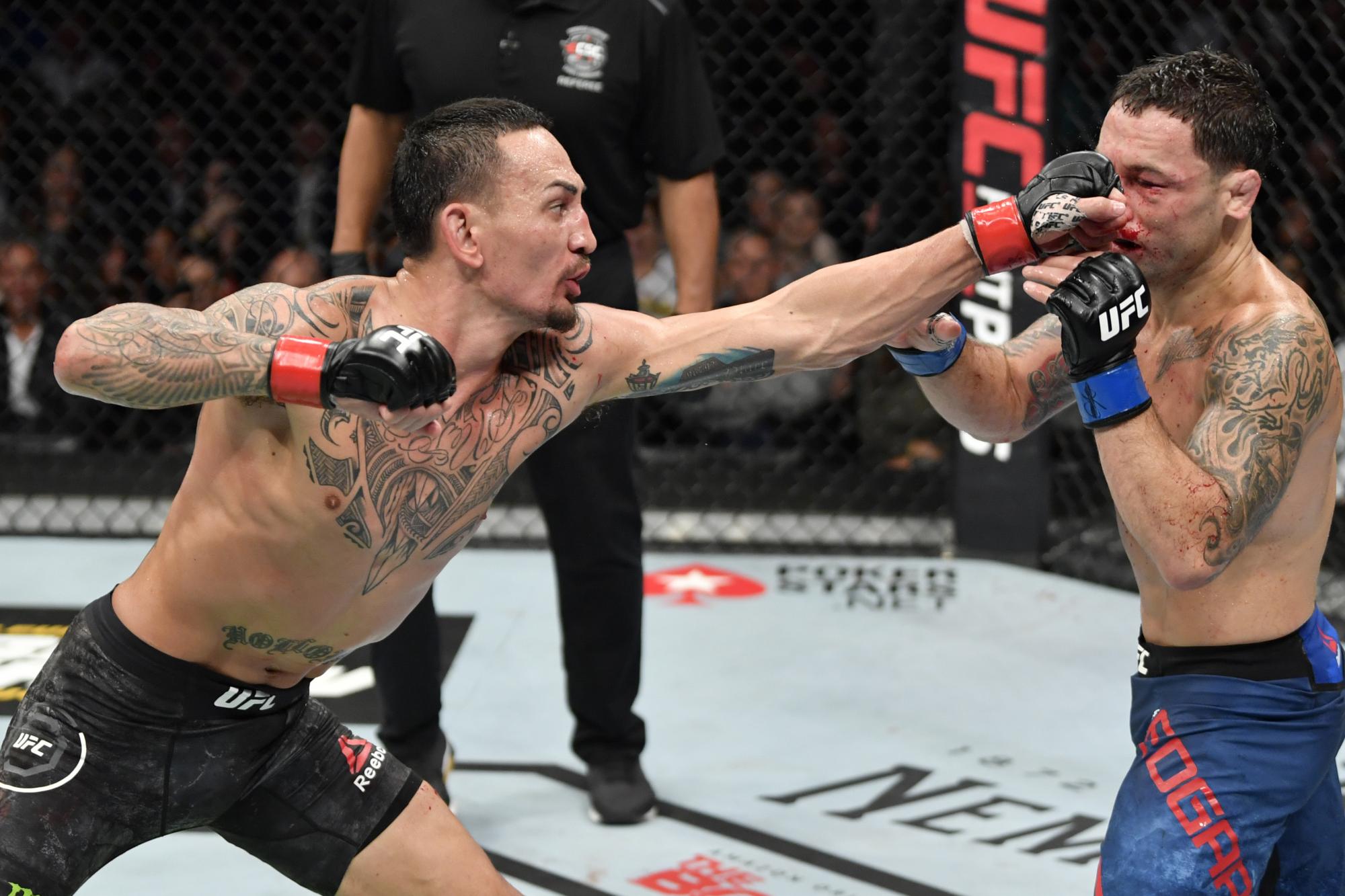 The Talking Points and Bonus Winners of UFC 240
By Steve Latrell • Jul. 28, 2019
Fight of the Night
Pantoja vs Figueiredo

Two proud fighters unwilling to relent any of the momentum they’ve constructed in their recent outings put it all on the line and gave the Edmonton fans a true show.

Pantoja weathered some expert striking from his opponent in the early going as he searched for the takedown, and when he finally acknowledged the takedowns were nowhere to be found, began returning fire of his own. The result was a back-and-forth, anything might happen fireworks display that delighted the patrons astute enough to be already be seated.

Prophetically, Figueiredo had planned this, long before Fight of the Night had been determined.

“I told him at the weigh-ins, ‘Let’s go have Fight of the Night. Let’s have a real fight for the fans.’ I fight for the fans. I want them to enjoy flyweight fights. He is a tough fighter. I wanted to have fun and beat him. That’s what I did.”

Performances of the Night
Hakeem Dawodu

For his third consecutive fight in his Canadian homeland, Hakeem Dawodu finally got the big finish that had been the hallmark of his pre-UFC career.

Frustrated by Yoshinori Horie’s constant movement in the early going, Dawodu took matters into his own hands, or more specifically, his own knees, stunning Horie in the third round. From there, Dawodu dug deep, gunning for a finish and dropping Horie with a dramatic kick to the head. The finish was thrilling, but Dawodu’s visible resolve was also special to watch.

“It feels great to get my first finish in the UFC. He was running a lot, which was different from what we saw on tape. I had to change game plans and really push the pace. It feels great to represent Canada and give Edmonton another knockout.”

Preparing for a fighter like Niko Price can be a mission in futility, but Geoff Neal once again wielded a deep fight IQ that allowed him to end the fight in the second round with a bludgeoning TKO. The Fortis MMA standout remains undefeated in four UFC bouts, and stands to have a much smaller number next to his name the next time rankings are determined.

It was a wild one. I really kind of expected it fighting a guy like Niko. He’s hard to hit without getting one back. I couldn’t throw more than one shot without him throwing back. I decided to just throw some punches…it’s good to get that experience against someone who’s going to try and take my head off at all times.”

Blessed once again by the friendly confines of Canada, Max Holloway earned his 16th featherweight win—and his 14th consecutive at 145 pounds—which leaves him with the  2nd most in UFC/WEC featherweight history just behind Jose Aldo; a man he has defeated twice. In his oft-delayed showdown with Frankie Edgar, Holloway’s legendary takedown defense left "The Answer’" without one, as his striking attack was continually thwarted by the Hawaiian’s deftly controlled jab.

Following the fight, an unscathed-looking Holloway admired the newly redesigned UFC belt, the first edition in his growing collection. And while he marveled at the new hardware, he was quick to point out it will soon join his others…in the closet.

“When I sit back and smell the roses, somebody might creep up and take this,” he explained, gesturing to the belt. “When it’s done, I’ll put them in a trophy case, but right now, I don’t have to look at them.”

Cris Cyborg displayed once again why she’s  one of the greatest of any era to play the sport, landing more than double the number of total strikes against opponent Felicia Spencer, and more than triple the number of significant strikes on her way to the unanimous decision victory.

“The sport is growing and better girls keep showing up. I’m really happy because when I started MMA, there weren’t any girls. Seeing girls in the cage makes me proud.”

Other notable Canadian performances bent on making the hometown fans proud included Newfoundland’s Gavin Tucker, who completed a two-year journey back to the Octagon with a submission of SeungWoo Choi. Fighting for the first time on her home country’s soil, Gillian Robertson made the most of the friendly confines with a dominant TKO victory over Sarah Frota. And while there are no moral victories in MMA, Felicia Spencer took Cyborg the distance for only the fourth time in her 14 year, 23-fight career. Showing an almost implausible degree of grit (not to mention an iron chin), her tenacity had the Edmonton faithful chanting “Let’s go Spencer!” in classic, Rocky-esque fashion.