"I feel like this card’s gonna get me some exposure that I need, and if I get this victory, it’s gonna be a great thing for my career, a big boost.”
By Thomas Gerbasi • Jul. 4, 2019

A blue collar worker in and out of the Octagon, Chance Rencountre isn’t the type of fighter who gets a lot of attention.

But in a world that often focuses on Instagram followers, creative trash talk and matters that have nothing to do with performance on fight night, the 32-year-old welterweight veteran may not have a chance.

Simply put, he’s the guy who puts on his hard hat, goes to work, and when it’s all over, he goes back to the gym to get ready for the next fight.

This week, the matter at hand for Rencountre is a UFC 239 bout with Ismail Naurdiev. It’s a big card in the “Fight Capital of the World,” and the kind of opportunity the Oklahoman has craved.

“It’s amazing to be able to go from fighting in tents and on reservations in Oklahoma to fighting in T-Mobile Arena on one of the largest cards that the UFC is gonna have this year,” he said. “It’s a great card and it’s an honor that they’ve asked me to fight. I’m ecstatic. It’s good exposure for me too, starting now. I’ve only had my first two fights and I don’t have a big following. I’m trying to pick it up, but I feel like this card’s gonna get me some exposure that I need, and if I get this victory, it’s gonna be a great thing for my career, a big boost.”

Before joining the UFC roster in 2018, Rencountre had a career similar to so many of his peers. A fast start, some positive notices, a key loss or two, and the wait for the phone call that would change his life forever. Rencountre knew he could fight with the welterweights of the UFC, but saying it and getting the chance to do it are two different things.

“There were always doubts, but it’s not necessarily whether I’m gonna make it or not,” he said. “I was getting kind of frustrated because I would see guys getting in there and I knew I could compete with them. But that’s my opinion. I didn’t know that for sure.”

In May of last year, he got the call. Ten days to fight rising star Belal Muhammad in Utica, New York. Rencountre took the fight, lost a three-round decision, but he got the answers he was looking for.

“I hung with someone a lot of people believe should be in the top 15 for 15 minutes without having a full camp,” said Rencountre, who got a full camp for his next bout in January against Kyle Stewart. That one ended in less than three minutes.

“I had a full camp, I went out there and finished a guy in a little over two minutes in my last fight and it’s not just that I belong here, but that I can compete and I can be top 15 and work my way up,” he said. “I’m not gonna say I’m gonna be a champion right away, but that’s the goal, for sure, and I’m definitely gonna keep my nose down and keep working hard. That’s what I’m all about. I’m humble and hungry. If you’re humble and you keep working hard and you want this, then anything’s possible.”

Humble and hungry, two traits that should be admired, not ignored. Rencountre has them, he uses them as a hashtag on social media and, most importantly, he repeats them to the young people of the Osage Nation that he is a proud member of. 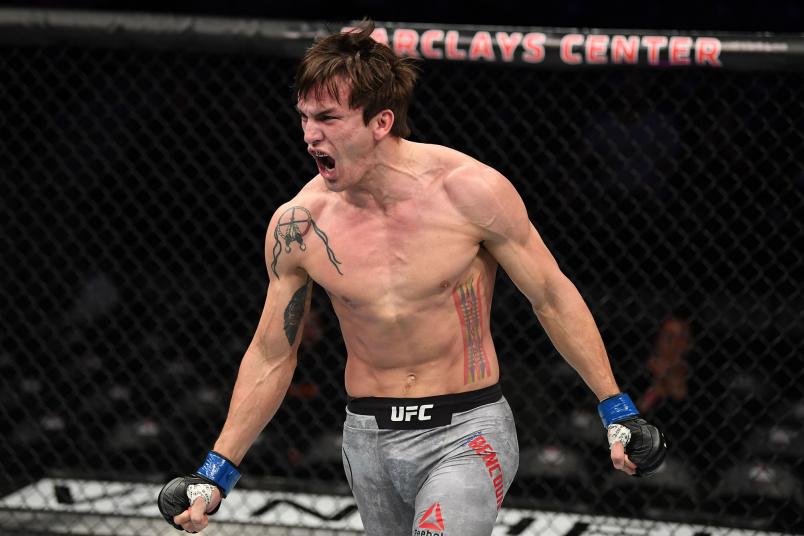 Chance Rencountre celebrates his submission victory over Kyle Stewart in their welterweight bout during the UFC Fight Night event at the Barclays Center on January 19, 2019 in the Brooklyn borough of New York City. (Photo by Josh Hedges/Zuffa LLC)

“Back home, it’s humbling,” he said. “Kids come up, ask me to take pictures, they want my autograph, and they know who I am. But I’m the same kid that I’ve always been. I grew up on that reservation and I’ve been incorporated into our culture my entire life and I’ve always been proud of being native and where I came from. So now being able to get to this platform and being able to promote ourselves a little bit more. I still haven’t done it as much as I can because I’ve been concentrating solely on me getting better. But hopefully after this fight I’ll get a little time and give back to the youth. I’ve done a couple wrestling camps there and I want to get back to doing more of that. I grew up with a single mother on the same reservation they did, so if I can put my head down and keep working and keep grinding and chase my dream, they can do it. You’ve just gotta believe and you gotta work.”

Thankfully, Rencountre isn’t the type to be showing up on police blotters or on scandal sheets, but there has to be a pressure to be a role model, not just for kids in general, but for his daughter in particular. “Black Eagle” disagrees.

“I don’t feel like it’s any pressure at all,” he said. “I always say that after this fight, my family’s gonna love me, my daughter’s gonna be there for me and my friends are still gonna be proud of me. So it doesn’t matter. Win, lose or draw, there’s no pressure in it. The pressure comes from inside me because I’m so driven and so ambitious. I want to do the best for myself and if I go out there and perform to the best of my abilities, I know I can do good things in this. It’s a cool thing and it’s a bonus. It’s not pressure.”

Sounds like a great story to me. Chance Rencountre hopes more people will hear it.

“There will be a day when people will recognize where I came from and what I’ve done,” he said. “I’ve grown up pretty rough to be where I’m at today. We didn’t have certain things and we didn’t live the best way. But my mother worked hard and that’s where I get my work ethic from, and I’m proud of where I came from. I came from nothing to something and it’s something I always carry with me.”