Preview the entire UFC 239 fight card with this edition of Fight by Fight
By Damon Martin • Jul. 2, 2019
JON JONES VS. THIAGO SANTOS

Light heavyweight champion Jon Jones has stayed ultra-busy in the past seven months with a pair of wins over Alexander Gustafsson and Anthony Smith. Now he will look for another title defense when he faces off with Brazilian power hitter Thiago Santos in the UFC 239 main event. Santos has found new life since moving to 205 pounds with three straight wins in the division, including knockouts over Jan Blachowicz and Jimi Manuwa. Santos possesses incredible knockout power in his hands and feet and that will always make him a dangerous opponent for anybody he faces. Of course, Jones is arguably the greatest mixed martial artist of all-time with a well-rounded skill set that has led to finishes on the feet and on the ground throughout his career. Jones will be a heavy favorite but Santos has plenty of experience and fight-changing power that could help him pull off the upset in the main event.

After winning the women’s featherweight title last December with a stunning first-round knockout against Cris Cyborg, reigning bantamweight champion Amanda Nunes will return to 135 pounds to look for another title defense while facing off with Holly Holm in the UFC 239 co-main event. Holm is a former 135-pound champion in her own right and she would love nothing more than to reclaim that title while facing arguably the greatest women’s fighter of all-time. Meanwhile, Nunes has already dispatched the other two women to hold the bantamweight championship with a knockout against Ronda Rousey and a submission victory over Miesha Tate. Now she’ll look to add Holm to her awe-inspiring resume when they clash on Saturday night.

The bad blood between Jorge Masvidal and Ben Askren will finally boil over when these two top 10 ranked welterweights meet in a pivotal matchup at 170 pounds. Masvidal is fresh off a staggering knockout against former title contender Darren Till in his most recent performance. Masvidal has long been considered one of the toughest outs in the entire welterweight division but now he’s closer than ever to a potential title shot if he can find a way to hand Askren the first loss of his career. The 2008 Olympian in freestyle wrestling is undefeated in his career with some of the most dominating grappling in the entire sport. Askren had to fight through adversity in his UFC debut but still managed to pull off a submission against former champion Robbie Lawler. To earn a shot at UFC gold, Askren will need to find a way to get through Masvidal in this highly anticipated showdown at UFC 239.

Former middleweight champion Luke Rockhold will make his move to 205 pounds when he faces Jan Blachowicz in a main card fight this weekend. Rockhold was a stalwart at the top of the middleweight rankings throughout his career but a rigorous weight cut finally convinced him it was time to test himself in a new weight class. Rockhold won’t be giving up much size to anybody at light heavyweight but he will maintain the speed and power that previously made him a UFC champion. As for Blachowicz, the Polish fighter will look to get back on track after his four-fight win streak was snapped in his most recent outing against Thiago Santos. Even with that defeat, Blachowicz has been better than ever in his most recent fights, and getting a win over Rockhold would be the perfect way to climb back into title contention in the light heavyweight division.

Ageless wonder Diego Sanchez has continued to defy the odds ever since winning the first season of The Ultimate Fighter, and winning back-to-back fights at welterweight have proven this old dog still has a few new tricks in him. To keep his win streak alive, Sanchez will have to go through another Ultimate Fighter winner in Michael Chiesa, who made quite an impact in his welterweight debut while taking out former interim champion Carlos Condit. Chiesa has promised that welterweight is the division where he will eventually win a UFC title, but to work his way up the ranks he’ll have to get a win over a crafty veteran in Sanchez, who never backs down from a fight with anybody.

Former UFC title challenger Gilbert Melendez makes his long awaited return to action when he faces featherweight prospect Arnold Allen on the UFC 239 prelims.  Melendez has faced a laundry list of legends throughout his career and after nearly two years away, the 37-year old feels rejuvenated. As for Allen, the British up and comer remains undefeated in his UFC campaign with five straight wins, and he would love to add a veteran like Melendez to his resume as he continues to work his way into the top 15 rankings at 145 pounds. 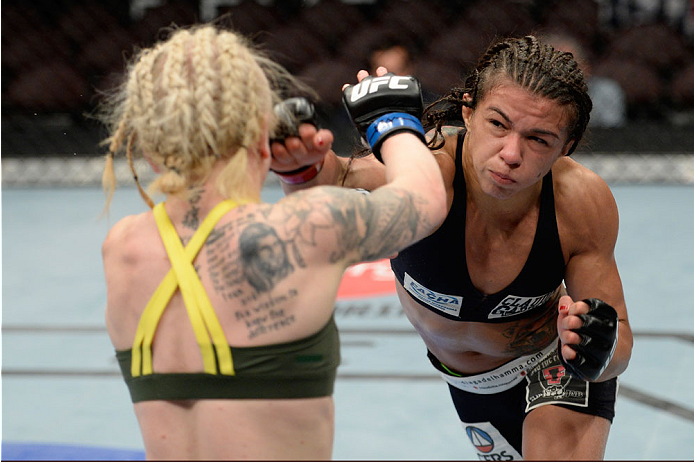 Former title challenger Claudia Gadelha has been on a roller coaster ride through her past four fights while bouncing back and forth between wins and losses. The Brazilian holds a lot of impressive wins during her UFC career but if she wants to work her way back into title contention, she has to begin building momentum in a growing strawweight division. The same could be said for Markos, who made a surprising run through The Ultimate Fighter season 20 before becoming a threat to anyone in the 115-pound rankings in the UFC. Markos is coming off a first-round submission win in her last fight but finding a way to beat Gadelha would give her the biggest win of her UFC career.

Ultimate Fighter Latin America winner Alejandro Perez remains a top prospect in the bantamweight division, but after suffering a loss in his last fight, the 29-year-old Mexican fighter desperately wants to get back on track. Prior to his loss to Cody Stamann in March, Perez was 6-0-1 in his past seven fights and he’ll attempt to restart a new win streak when he faces Chinese fighter Song Yadong at UFC 239. Yadong remains undefeated in his UFC career with three straight wins and he’ll look for a fourth in a row when he clashes with Perez on the preliminary card.

Undefeated middleweight Edmen Shahbazyan has been flawless since arriving to the UFC by way of Dana White’s Contender Series including a devastating 38-second knockout in his last fight against Charles Byrd at UFC 235.  To keep his perfect record intact, Shahbazyan will have to get through Welsh slugger Jack Marshman, who swings hammers with every punch he throws inside the Octagon. Marshman is coming off a hard-fought win over John Phillips in his last outing, but to begin building his momentum in the division, he’ll have to find a way to hand Shahbazyan the first loss of his career.

“The Austrian Wonderboy” Ismail Naurdiev — no relation to Stephen “Wonderboy” Thompson — made quite a UFC debut earlier this year with a win over highly touted grappler Michel Prazeres. Now Naudiev will look to go 2-0 in the UFC when he takes on Chance Rencountre, who is coming off a win of his own after dispatching Kyle Stewart by submission back in January. As the welterweight division continues to seek out new talent, the winner of this fight could be a prospect to watch in 2019 and beyond.

Originally scheduled to face Sean O’Malley, bantamweight up and comer Marlon Vera now gets an assignment against newcomer Nohelin Hernandez. Vera is on a hot streak with three consecutive finishes, but Hernandez has won four straight on his way to the UFC, and a win over Vera would help him make an immediate impact.

Former Ultimate Fighter competitor Pannie Kianzad stepped up on short notice to make her return to the UFC as she faces off with Julia Avila, who will be making her Octagon debut after previously competing in Invicta FC. Avila is a very solid prospect who picked up a nasty knockout in her last fight before moving to the UFC. Kianzad is a veteran capable of relying on her experience to test the UFC newcomer in the first fight of the night.