UFC Teamed Up With The Chicago Blackhawks Foundation, Chicago Bulls Charities And The Special Olympics Of Illinois For The Raffle
By Gavin Porter • Jun. 12, 2019

At UFC 238: Cejudo vs. Moraes, UFC partnered with the Chicago Blackhawks Foundation, Chicago Bulls Charities and the Special Olympics of Illinois to put on a 50/50 raffle with all proceeds benefiting the aforementioned groups. In total, the raffle raised nearly $16,000 with winner Robert David Werges taking home roughly $8,000 in winnings. 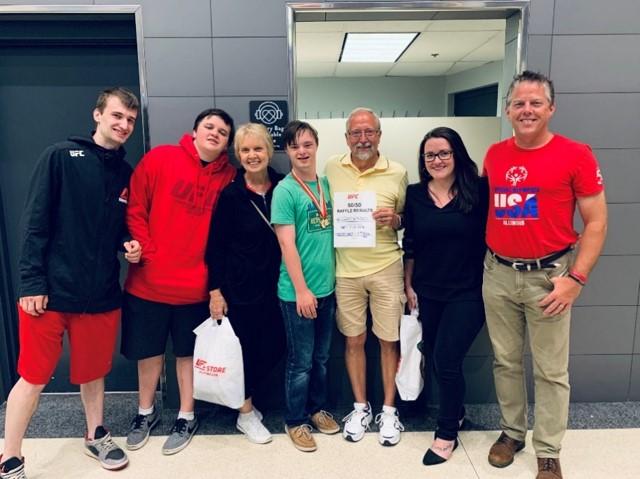 Chicago, IL - June 8, 2019 - David, his wife, and two grandsons are pictured above, with a member of Special Olympics of Illinois

Werges' took one of his grandsons, Marshall and Devin, to UFC 218: Holloway vs Aldo 2 in Detroit. So when the UFC was back in the upper Midwest, it was only fair that he took the both. Werges' grandsons were both massive fans of UFC 238 guest fighters Stephen "Wonderboy" Thompson and Chris Weidman. Thanks to the UFC fan experience event the young fans were able to meet Thompson and Weidman.

“We will end up spending it (the prize money) on the rest of the grandchildren, including Marshall and Devin,” Werges said.

Chris Winston, the Chief Marketing Officer for Special Olympics of Illinois expressed his gratitude for the contribution, and provided some insight into what the funding will do for athletes.

"These dollars, the approximately $4,000 that we will get will go to athletes," Chris said. "We don't charge our athletes to complete so when they compete, it's paid for by what we did here tonight. That money is really, really important."

“The Chicago Blackhawks Foundation is incredibly grateful to have been selected as one of the charity beneficiaries of UFC’s recent event at the United Center," Hinton said. "Thanks to the generous support of UFC’s fans through the 50/50 raffle, we will be able to make a positive impact on our local community as we continue toward our mission to create a healthier, smarter, more secure world for families in and around Chicago.”