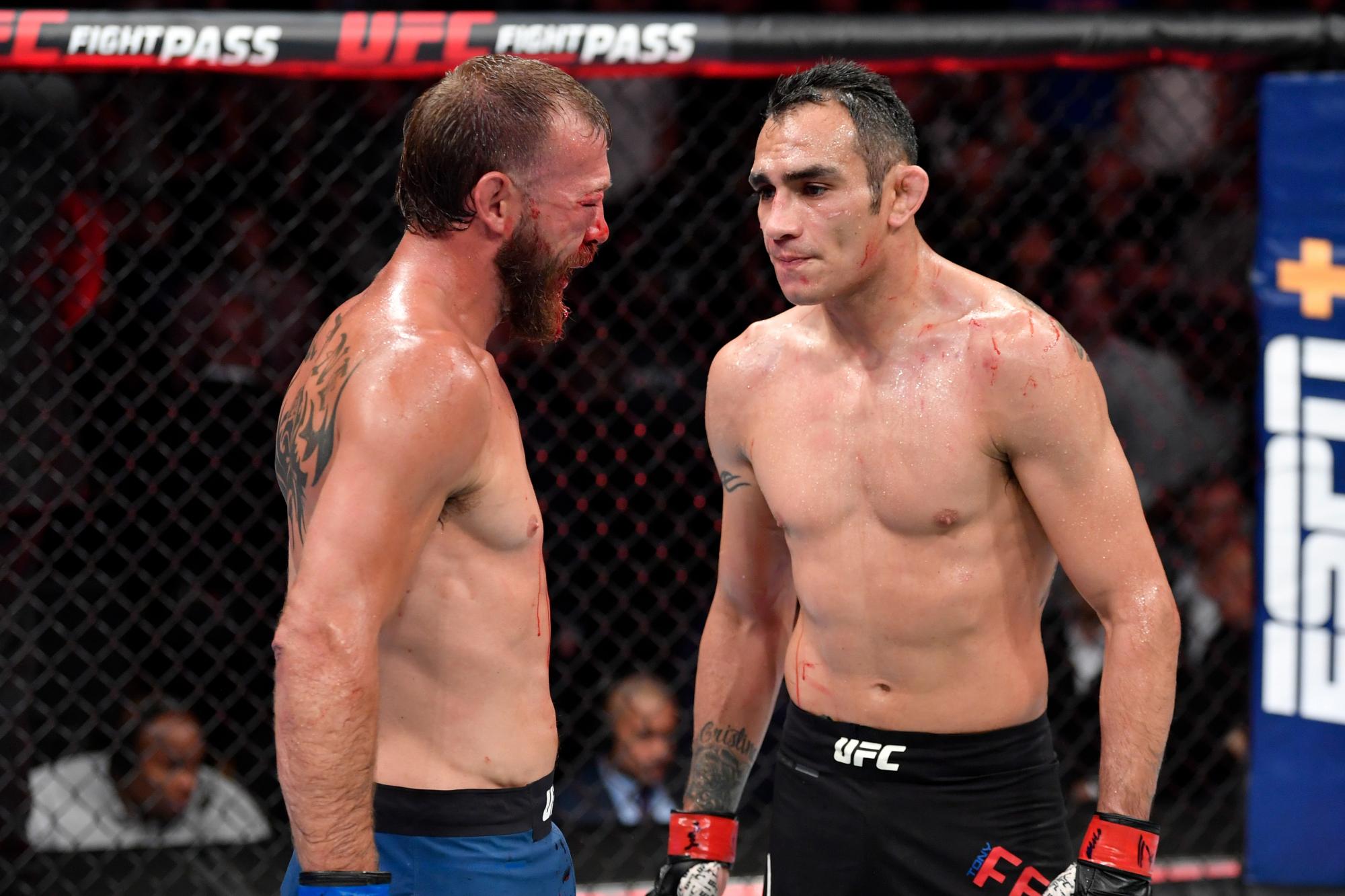 The Talking Points and Bonus Winners of UFC 238
By Zac Pacleb • Jun. 9, 2019
Fight of the Night
Tony Ferguson vs Donald Cerrone

I mean, is anyone surprised?

This seemed like one of those fights people would throw out there for a “dream matchup” discussion, and it pretty much delivered right up until Cerrone’s right eye was swollen shut before the start of the third round. Naturally, “Cowboy” wanted to fight, and Ferguson wasn’t all too happy with how things ended, but it was the show we all expected. Afterward, even Furgeson had trouble processing it.

Cerrone looked like he dictated the frenetic action in the first round, but , as Ferguson is one to do, pushed the tempo even higher in the second and started to take the momentum. A few spinning elbows connected and busted Cerrone up, who, to his credit, never took a step backward.

“I could see (Cerrone)’s energy levels start to decrease,” Ferguson said. “And when you have an opponent like that, you can start to kind of pick them apart.”

If a rematch happens – Ferguson said he’s up for it – not many people would complain, especially seeing as “El Cucuy” is long overdue for a chance to regain the lightweight belt.

Performances of the Night
Henry Cejudo

It might be tempting to roll your eyes at Henry Cejudo’s schtick, but once the guy gets into the Octagon, he puts on a display of heart, tenacity and technique that’s hard to deny. After a tough first round where he ate leg kick after leg kick from Marlon Moraes, the flyweight champion bit down on his mouthpiece and made the fight a nasty one. He upped the pace, got inside and tired Moraes before landing countless knees in the clinch.

His cardio held up into the third round, and Moraes faded. In the end, it was Cejudo with two belt over each shoulder, and of course, his Olympic gold medal hanging from his neck.

When Valentina Shevchenko secured the flyweight belt at UFC 231, it felt like a sight we’d see for a long, long time. She did nothing to put doubt into that notion with a dominant performance against Jessica Eye, punctuated by one of the most devastating head kick knockouts ever seen in the UFC.

On the feet or on the mat, Shevchenko made it look easy, which, in her words, is the whole point of how hard she trains.

After a win like that, nobody is going to forget who holds the flyweight title any time soon.

UFC 238 was so stacked, a flyweight contender fight between Katlyn Chookagian and Joanne Calderwood opened the show, and Chookagian made the most of her second chance to earn a title shot with an impressive performance.

After Calderwood touched up Chookagian’s leg with a barrage of kicks, “Blonde Fighter” found her timing and clocked Calderwood more than a few times with rangy right hands. In the end, even though Calderwood was the once dancing and taunting, Chookagian was the one with the best stake at a shot at Valentina Shevchenko.

The “Funk Master” put on what might have been the most complete performance in his career with his win over Pedro Munhoz. From picking apart Munhoz at range in the first round, to adjusting as the fight wore on and Munhoz cracked him with a few good shots to his leg, Sterling put it all together.

Munhoz tried to draw Sterling into a bar-style scrap, but Sterling kept his head and stuck to his effective gameplan to secure the victory. With the win, Sterling might’ve earned a chance to take on newly-minuted bantamweight champion Henry Cejudo, so long as Cejudo doesn’t want to defend his flyweight belt first.

In what was supposed to be Tatiana Suarez’s breakout showcase, the “next big thing” in the strawweight division had to battle adversity in the form of equal parts injury and a game opponent. Suarez revealed she sustained a neck injury, which hindered her normally dominant wrestling abilities, but Ansaroff made life hard for her as well. Suarez was quite complimentary of Ansaroff’s coaches, as she seemed to have answers for all Suarez attempted throughout the fight, including a stunning flurry to end the third round as Ansaroff looked to steal the fight.

At the end, however, Suarez remained undefeated with the most likely strawweight title challenger not named Rose Namajunas.