All The Big Winners From Jeunesse Arena, Rio De Janeiro
By Thomas Gerbasi • May. 10, 2019

Scroll down to see how all the action unfolds from Jeunesse Arena in Rio De Janeiro, Brazil.

Order UFC 237 Here For Any Device! 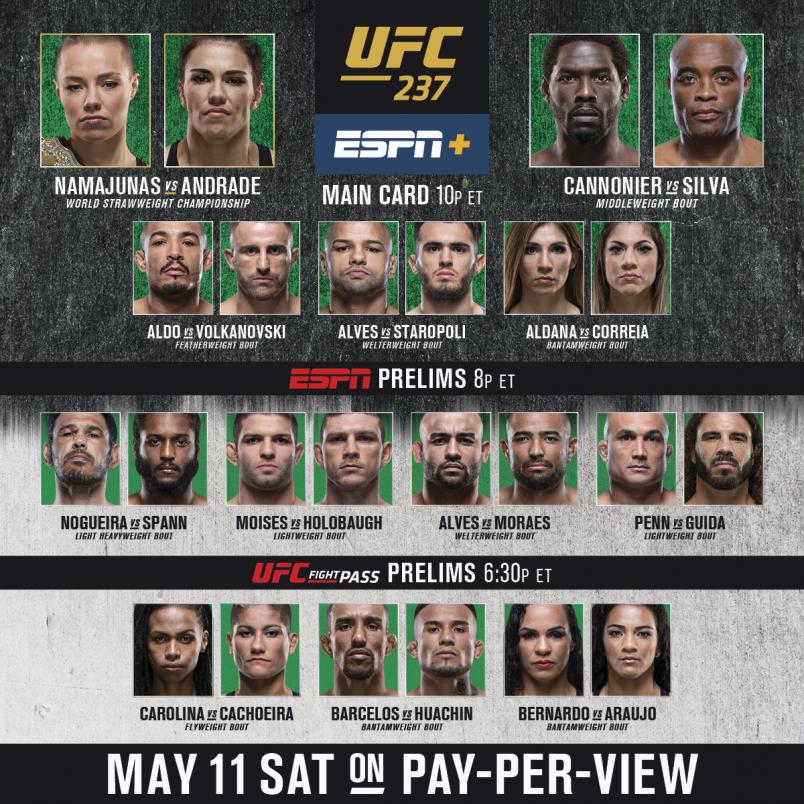 Stepping in for Melissa Gatto on less than a week’s notice, Viviane Araujo put on a spectacular performance in her UFC debut, halting bantamweight contender Talita Bernardo in the first round of the UFC 237 opener.

Clearly the faster striker, Araujo – who normally fights at strawweight – dominated the standup action during the first round, and even when Bernardo got close enough for a takedown, it was the newcomer getting on top and finishing the round strong.

It was more of the same in round two, highlighted by a thudding right hand from Araujo in the second minute. Bernardo started to land some shots late in the round, only to be taken down by Araujo in the final minute.

And while Bernardo stalked her foe in an effort to turn the fight around in the final frame, another flush right hand from Araujo dropped Bernardo hard to the canvas, prompting referee Fernando Portella to step in and stop the fight at the 48-second mark of round three.

Rio’s own Raoni Barcelos extended his winning streak to seven in bantamweight action, halting UFC newcomer Carlos Huachin in the second round.

The 135-pounders fought at a fast pace from the start, trading strikes at close range throughout the opening five minutes. That pace appeared to be taking a toll on the Peruvian newcomer in the second round, while Barcelos barely slowed down. In the second minute of round two, Barcelos’ right hand put Huachin on the mat, and while he wasn’t able to finish his foe with his follow-up barrage, Barcelos then turned to his ground game, where his advantage was even more significant, and after tiring the Lima native out, more ground strikes brought in referee Eduardo Herdy to stop the fight at 4:49 of the frame.

After a first round heavy on the action as Cachoeira (8-3) stalked and Carolina (6-1) looked to counter from long range in between aggressive clinch exchanges, a head kick dropped Cachoeira in the second minute of round two. Sao Paulo’s Carolina looked for a submission on the mat, but Cachoeria was able to get loose. On the way up to her feet, though, Cachoeira caught an illegal knee to the head, prompting a brief stoppage in the action. Once the bout resumed, Carolina went back to work, and after landing some strikes, she locked in a guillotine and went to the mat. “Zombie Girl” again fought free, but she was digging herself a hole on the scorecards, and while she kept pressing forward in the final round, several more big shots from the busy Carolina made sure the Rio product didn’t get out of that hole, as she lost the bout via scores of 30-26 twice and 29-27.

BJ Penn had his moments during his lightweight bout against fellow veteran Clay Guida, but the UFC Hall of Famer wasn’t able to snap his losing streak, as he dropped a three-round unanimous decision to “The Carpenter.”

Looking better than he has in several years, Penn’s striking was sharp in the opening round, and though Guida appeared to be the busier of the two, landing several hard leg kicks, the Hawaiian’s counters were on target throughout the first five minutes.

A similar pattern played out for much of the second round until Guida bulled Penn to the fence with two minutes left and worked from there. Penn got loose, but he was winded, and he then got stunned briefly by a kick to the head before a late takedown from Guida.

Guida went on the attack as round three began, putting Penn on the defensive, and it was clear that Illinois’ “Carpenter” was pulling away. Guida scored a flash knockdown just before the midway point of the final frame, and though Penn was game, he was unable to keep the swarming Guida off him.

Former TUF Brazil winner Warlley Alves showed off prime form in his welterweight bout against countryman Sergio Moraes, knocking out the veteran BJJ black belt in the third round.

Alves went to work on Moraes’ leg from the time the two were waved into battle, and by the end of the round, he had “The Panther” banged up and doing anything possible to protect his lead left leg. Unfortunately for Moraes, his leg continued to get battered in round two as Alves extended his lead with punishing effectiveness. Moraes came out swinging in the third round, but after a strong initial burst, Alves settled down and returned to his steady striking attack. Finally, in the closing minute, a flying knee hurt Moraes and a follow-up right uppercut sent the gritty veteran down and out, with referee Osiris Maia stepping in at 4:13 of round three.

After a back and forth opening, Moises (12-3) changed things up with a takedown with a little less than three minutes to go in the first, and some hard elbows from half-guard followed. Continuing to control matters on the mat, Moises kept Holobaugh grounded until the horn, wrapping up a solid first frame.

Holobaugh (17-7, 1 NC) had success on the feet in second round, marking up Moises’ face before digging in with several hard body shots. But Moises landed a series of elbows in response, setting up a third round that could decide the fight if Holobaugh was able to make a final surge.

But Moises’ striking put him back in the lead to start the third, and he followed up by putting the Louisianan on the mat. With three minutes left, Holobaugh got upright but was dumped again seconds later and was nearly submitted by a choke from the Brazilian. Holobaugh kept battling, but the takedowns and ground strikes kept coming, allowing Moises to pick up his first UFC win via scores of 30-26 twice and 30-27.

Rising light heavyweight star Ryan Spann scored the biggest win of his career in UFC 237 prelim action in Rio de Janeiro, as he knocked out hometown hero Rogerio Nogueira in the first round.

A firefight broke out early, followed by a takedown from Spann. The Texan nearly sunk in an arm triangle choke, but the veteran star escaped, much to the delight of the home crowd. But once standing, Spann’s speed and accuracy was too much for Nogueira, and a left uppercut sent the former PRIDE star hard to the deck. A couple ground strikes were just window dressing before referee Herb Dean stopped the fight 2:07 into the opening stanza.

Aldana did an excellent job of keeping the shorter Correia at bay throughout the first round with crisp 1-2s upstairs. Correia got closer in the second round, scoring with hard kicks and punches, and she briefly jarred Aldana with a right hand with a minute left in the frame, allowing the “Pitbull” to take control heading into the final round.

The third was back and forth for much of the frame, but then ended suddenly when a Correia takedown attempt turned into an armbar that forced the Brazilian to tap out at 3:24 of the final round.

Welterweight up and comer Laureano Staropoli made a major statement in his bout with veteran contender Thiago Alves, defeating the “Pitbull” via unanimous decision.

Staropoli outworked Alves throughout the first frame, allowing the Argentina native to take the frame, but not before Alves landed hard just before the horn ending the round. Alves kept the momentum into the second round, but Staropoli responded well and didn’t get flustered, mixing his strikes up nicely as Alves did his thing.

With the fight seemingly close heading into the final round, both fighters came out swinging, but Alves got the crowd roaring when he took Staropoli down in the opening minute. Staropoli got up immediately and it was back to a standup battle. In the final minute, a knee by Alves put Staropoli on the defensive, but by the time the fight ended, the bloodied battlers were back on even terms.

Entering tonight’s card, the only fighters to defeat featherweight great Jose Aldo in the past 13 years were Max Holloway and Conor McGregor. Add Alexander Volkanovski to that exclusive club, as the Australian outworked the Brazilian star over three rounds en route to a unanimous decision victory that put him in line for a shot at the 145-pound crown held by Holloway.

Volkanovski had a busy first round, scoring mainly with his kicks, yet each of Aldo’s effective potshots were greeted with roars from the Rio crowd, perhaps influencing the judges in the Brazilian’s favor. Volkanovski kept the pace high in the second, mixing up his attacks to keep Aldo off balance. Aldo kept it close, but he just wasn’t being busy enough to take over, and in the third, Volkanovski pulled away, leaving no doubt when it came to the final verdict.

The UFC 237 co-main event finished in anti-climactic fashion, as a knee injury forced former middleweight champion Anderson Silva out of his bout with Jared Cannonier, with the Arizonan picking up a first-round TKO victory.

It was shaping up to be an interesting three-rounder, with the 44-year-old Silva appearing loose as he looked to find his range and Cannonier peppering the middleweight great with kicks to the leg and the occasional right hand upstairs. But in the final minute, a kick to Silva’s right knee sent the Curitiba native to the mat in pain. Referee Herb Dean immediately stepped in, with the official time of the stoppage 4:47 of the first round.

The fourth strawweight champion in UFC history hails from Brazil. And after fighting past plenty of adversity in the first round of her UFC 237 main event, Jessica Andrade is that champion, as she stopped Rose Namajunas in the second round at Jeunesse Arena in Rio de Janeiro, Brazil.

The stick and move attack of Namajunas continued to pay dividends in round two, and while Andrade kept throwing and charging, too often the Brazilian was left hitting air. But as the two locked up against the fence, Andrade again lifted Namajunas for a slam, and this time it hit in devastating fashion, as Namajunas landed on her head and stunned her. Two strikes followed, with referee Marc Goddard stopping the fight at the 2:58 mark of the second round.

With the win, Rio de Janeiro’s Andrade moves to 20-6. Denver’s Namajunas, who was making the second defense of her title, falls to 9-4.