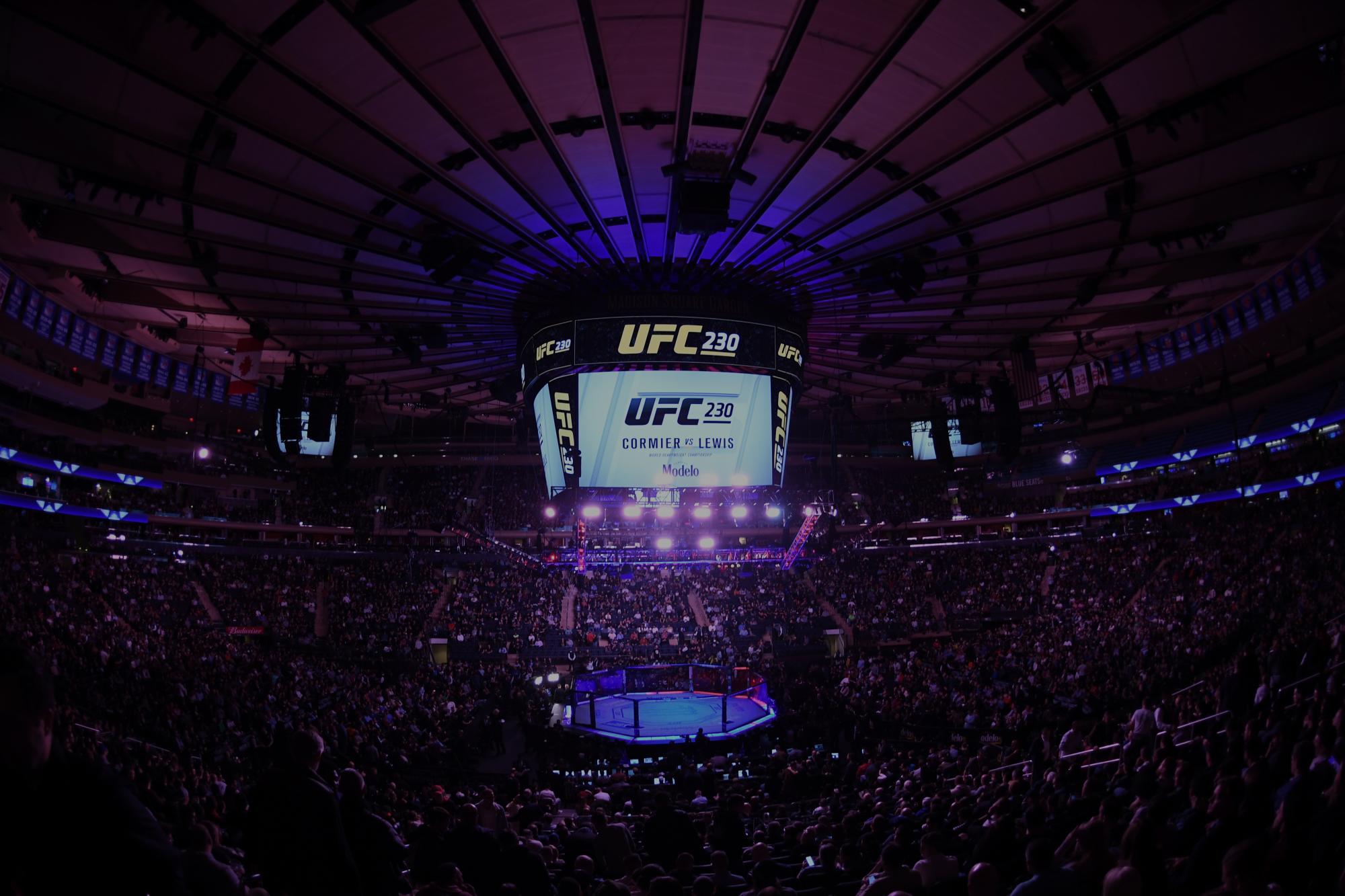 Who were the winners at UFC 230: Cormier vs Lewis? Click below to get the results for all the fights..

The main event has arrived. Cormier puts his heavyweight belt on the line against Derrick Lewis, who’s off a thrilling knockout finish from UFC 229. Cormier wastes no time getting the fight to the ground, scoring a takedown 1 minute in. Cormier is working for side control but settles for Lewis’ back. Lewis begins to stand but Cormier throws him right back to the mat. This time DC is having some success striking from the top, landing hard shots from side control. Lewis lands just three strikes in Round 1 – which could potentially be a 10-8. Lewis throws a couple big shots to start off Round 2 but the challenger can’t avoid the champ’s grasp. DC gets him to the ground again, takes his back and easily locks in a rear naked choke. Lewis taps and Cormier will retain his heavyweight belt.

Weidman returns to the Octagon for the first time since defeating Kelvin Gastelum over a year ago. Ironically, Gastelum’s last victory came against Jacare Souza. “Let’s go Weidman!” chants hail as we get things started. Both fighters feeling each other out for the first minute without any action. Weidman strikes first with a right hand and Souza appeared stunned for a brief moment. The Brazilian recovered fast and now the two are exchanging back and forth. Weidman has the edge, landing more often as Souza’s nose starts to bleed. A few left jabs in a row from Weidman has added to the bleeding and Round 1 comes to end. Weidman has Souza on his heels, landing at a high rate. Souza begins to press forward and lands a big overhand right. He follows it up with a few more rights and things have turned. Weidman halts the surge by clinching Souza and delivers a big right hand of his own. Two of the UFC’s best grapplers are going all out on the feet. The pace slows and Weidman is stalking Souza but doesn’t land anything damaging. The two catch their breath against the cage with under a minute to go. Weidman takes him down but Souza flips position and nearly lands a massive uppercut. Strikes were 51-39 in favor of Souza in just Round 2. Souza looks fresh coming out for Round 3 and is slinging big rights. Weidman avoids the destructive ones. Now Souza appears fatigued and Weidman is pressing, connecting with non-stop left jabs. Souza returns with a big surge and finally connects with his overhand right. Weidman drops to the floor and the fight is stopped moments after.

Jared Cannonier (TKO at 0:29 of Round 2) def David Branch

It doesn’t take long for Branch to earn his first takedown. They rise to the feet with Cannonier landing elbows from behind but Branch brings him right back to the ground. Branch is finally able to keep control after taking Cannonier down a third time. Still no damage done though and Cannonier comes alive in the final seconds of Round 1, connecting on a spinning backfist. The momentum continues and Cannonier sends Branch to the mat with a big right hand. He continues to bring damage from top before the fight is stopped.

Roberson kicks things off with a nice left hook and lands it a couple more times when Marshman steps within reach. Marshman is not backing off, though, and continues to press forward. The two exchange back and forth and end up against the cage where Roberson connects with a knee-left hook combo. Marshman is turning things around early in Round 2 and comes out firing. Despite Roberson’s successful counter punching, Marshman continues to press the action. Two more left hooks by Roberson get the crowd involved and he follows it up with massive takedown – brining Marshman airborne before he slammed him to the mat. Roberson stays on top for the rest of the round but doesn’t do much with the position. A couple cuts open on Marshman (lip and under eye) while Roberson continues to have success with a left hook. He scores another takedown with 2 minutes left and looks to be en route to a victory. Roberson improves to 3-1 in the UFC.

Israel Adesanya (TKO at 4:51 of Round 1) def Derek Brunson

One of the most anticipated fights of the card is underway. Brunson shoots for a takedown right away and the two clinch against the cage. Bruson’s game plan is clear as he shoots for a couple more but Adesanya is ready. Not much striking involved through first four minutes as the two head to the clinch against the cage again. Adesanya finally breaks free and pours it on! First stuns Brunson with a right hand that sent him to that mat. Brunson returned to his feet quickly but was met with a sharp left and knee. Clearly stunned, Brunson would not let up but couldn’t avoid the strikes and Herb Dean steps in to stop the fight.

Back to featherweight action. Knight, who reeled off four consecutive wins (with three bonuses) early in his career, is attempting to end a three-fight skid. Both fighters come out flying and a night of exciting fights looks to continue. Rinaldi earns two clean, perfect takedowns. Knight can’t break free but is doing well to avoid too much damage. Rinaldi scores another takedown to kick off Round 2 and is successful taking Knight’s back. Rinaldi has him wrapped tight and the search is on for the RNC. He gets close a few times but Knight avoids the attempts and we’re on to Round 3. The roles reverse early in Round 3 and it’s Knight who takes Rinaldi’s back, but it doesn’t last long. Rinaldi flips positions, gets Knight’s back and searches for the RNC once again. Knight stuffs again for the next two minutes and attempts to rise to his feet with no success. Rinaldi never got the finish but controlled the entire fight.

Eubanks and Modafferi now set to get their rematch started. Eubanks is the aggressor early, pushing the pace. She gets a takedown and remains in top control for the rest of the opening round. Eubanks continues to push the pace and Modafferi finally lands a couple combos but gets clipped by a head kick and goes to the floor. Eubanks couldn’t get a finish and the fight returns to the feet. Modafferi works – and completes – a takedown and the crowd is getting behind her. Eubanks attempts to lock in an armbar while the two grapple on the floor but to no success – on to Round 3. Eubanks lands a few lefts as Modafferi gets close. The two get their fair-share of shots before Eubanks scores a takedown and remains in control throughout.

Time for some featherweight action, as Julio Arce brings a three-fight win streak into this battle with Sheymon Moraes. A New York City native, Arce gets a big cheer from the fans during his intro. Moraes attempts to silence the crowd and drops Arce early. He tries to get the finish from the top but Arce hangs and brings the fight back to the feet. Arce now battling to earn a takedown and climbs the back of Moraes. He can’t lock in a rear naked choke and the bell sounds. The two are tangled against the cage and Moraes connects an elbow. Arce exits the exchange with a massive cut on the right side of his head from. Moraes drops Arce again with 1 minute left, a straight left, and adds in an elbow from top position. Arce is losing a ton of blood but he survives the round. Arce enters the third round smiling, unfazed by the cut. Arce is outworking Moraes midway through the third but neither fighter has inflicted much damage. Not much action for the final couple minutes. We’ll go to the judges…

Good and Saunders step into the Octagon each looking to rebound from a loss. Good lands a couple uppercuts from the clinch early on and drops Saunders. Good jumps on top and adds a few hammer firsts before the fight is stopped. A quick finish to kick off the FS1 prelims!

The pace is intense early here between Frevola and Vannata. Frevola slinging kicks and Vannata responding with punch combinations. The crowd is loving this fight as the two lightweights smile at each other in between landed shots. Frevola’s body kicks are landing hard and he connects big with a knee before scoring a takedown. Vannata is saved by the bell. The break brings Vannata a resurgence and he drops Frevola with a big right hand. Vannata follows it up with some more rights but Frevola is hanging on. The pace slows a bit as both fighters take some time to recover from the slugfest. After the thrilling first two rounds, the third is unconvincing for either fighter. Frevola scores a takedown with a minute left but they rise back to the feet instantly. Frevola lands a right at the last second but this one will be tough to judge.

Shane Burgos (armbar submission at 2:11 of Round 1) def Kurt Holobaugh

Burgos and Holobaugh up now in a matchup that sneakily has Fight of the Night potential. Burgos looks locked in to avenge his first career loss from UFC 220 and is landing some jabs. Holobough stuns Burgos and drops him 2 minutes in but Burgos composes himself from the bottom in sinks in an armbar. Holobough taps and Burgos moves to 11-1.

Heavyweight action kicks the night off as Adam Wieczorek and Marcos Rogerio De Lima get things underway in Madison Square Garden. De Lima scores a takedown midway through the first and uses his size advantage to stay in top control through the rest of the round. De Lima stays in control in Round 2, this time on the feet landing several blows but never getting close to a finish. The fight extends to the third for the first time in De Lima’s UFC career and fatigue doesn’t appear to be a factor. He notches another takedown and out-strikes Wieczorek for the third consecutive round, making it an easy decision for the judges.