UFC 228: Woodley vs. Till Fight By Fight Preview

TYRON WOODLEY VS. DARREN TILL
There's little doubt that welterweight champion Tyron Woodley will be facing his biggest challenge this weekend at UFC 228 when he goes up against British slugger Darren Till. Now that verbiage isn't just because Till is undefeated and has back-to-back wins over Stephen "Wonderboy" Thompson and Donald "Cowboy" Cerrone. Till is also a massive fighter competing at welterweight and he will have a ton of size on the champion once they step into the Octagon together. That said, Woodley hasn't tasted defeat in over four years and he's not looking to give up his title now. Woodley has shown incredible knockout power and arguably the best wrestling in the welterweight division in recent years. Plus, Woodley has proven he can go deep into all five rounds if that's what it takes to get the job done. Meanwhile, Till is a devastating striker with an offensive-minded strategy that has put every opponent he's faced in trouble at one point or another during his UFC career. Till has looked like the real deal ever since first arriving in the UFC, but facing a champion like Woodley is a whole different animal. This should be one of the most intriguing title fights in recent memory and it's impossible to say who is going to come out on top.

NICCO MONTANO VS. VALENTINA SHEVCHENKO
Nicco Montano became the first UFC women's flyweight champion last December when she defeated Roxanne Modafferi at The Ultimate Fighter Finale. Unfortunately, Montano was already hampered with a foot injury going into that fight, so she's been out of action ever since while nursing her way back to health. Her welcome back to the Octagon will be a title bout against arguably the most ferocious fighter at 125 pounds in Valentina Shevchenko. After facing the best of the best at bantamweight — including two razor close fights against champion Amanda Nunes — Shevchenko is finally competing at a more natural weight class. She's a Muay Thai striking machine with an underrated ground game that could give anybody trouble. Shevchenko will also walk into the fight as the biggest favorite to ever face off with an incumbent UFC champion. Still, Montano has defied the odds before when she was ranked No. 14 out of 16 fighters during the tournament to declare the first ever women's flyweight champion. Long odds have defined Montano's UFC career thus far and she'll look to pull off yet another upset at UFC 228.
FREE FIGHTS AVAILABLE: Tyron Woodley vs Robbie Lawler | Darren Till vs Cowboy Cerrone

ZABIT MAGOMEDSHARIPOV VS. BRANDON DAVIS
More than a few people have labeled Zabit Magomedsharipov as the best prospect in the entire sport after he debuted in the UFC last year. Now the Russian featherweight will look to rack up another win as he faces former Dana White’s Tuesday Night Contender Series veteran Brandon Davis at UFC 228. Davis took the fight on short notice so he's obviously stepping into the lion's den for this matchup. Magomedsharipov is as good as advertised, but he's got to come at Davis with the same kind of intensity as any other opponent he's faced or he could be staring at a shocking result.

JESSICA ANDRADE VS. KAROLINA KOWALKIEWICZ
A pair of former strawweight title contenders will face off on the main card as Jessica Andrade takes on Karolina Kowalkiewicz. This is an incredibly important fight for the 115-pound women's division because the winner could be in line to face champion Rose Namajunas. Considering Kowalkiewicz already holds a win over the reigning champion, she has to know how important this fight could be to get back into title contention. As for Andrade, she's looked like an unstoppable force in recent fights, including a pair of dominant wins over Tecia Torres and Claudia Gadelha in her last two performances. Andrade has to make it three in a row if she hopes to get a shot at Namajunas in the near future.

ABDUL RAZAK ALHASSAN VS. NIKO PRICE
Don't blink when Abdul Razak Alhassan and Niko Price step into the Octagon to kick off the main card on Saturday night. These two have combined for 21 career wins, with 20 of those fights ending by knockout or submission. Both fighters have finished every opponent they've faced in the UFC and it's doubtful Alhassan or Price want to start going to a decision now. This should be a fast-paced matchup and perhaps a dark horse to steal the Fight of the Night award when the show is over.

CARLA ESPARZA VS. TATIANA SUAREZ
Former Ultimate Fighter winner Tatiana Suarez has looked unstoppable since joining the UFC roster but she will face her stiffest test to date in former champion Carla Esparza. Suarez is a world-class wrestler with a nasty grappling game, but she'll definitely have her hands full this time around. Esparza is a former All-American wrestler in her own right and she's been as dominant on the ground as any fighter competing at 115 pounds today. If Suarez hopes to make a run at the title in 2019, her proving ground will come on Saturday night against Esparza.

ALJAMAIN STERLING VS. CODY STAMANN
A Twitter fueled feud translated into this outstanding fight at bantamweight, as Aljamain Sterling takes on Cody Stamann in a UFC 228 prelim bout. Stamann has gone 3-0 since joining the UFC roster, including a win over Bryan Caraway in his most recent performance. As for Sterling, the Ray Longo-Matt Serra trained fighter has gone 3-1 over his past four fights and he remains one of the slickest grapplers in the entire division. If Stamann wants to take Sterling's spot in the rankings, he's going to really have to fight for it in this matchup. 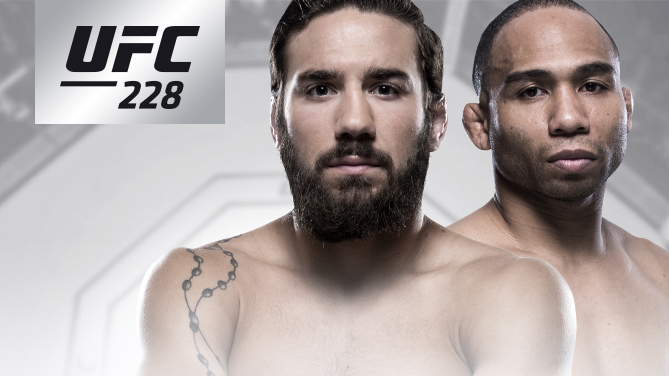 JIMMIE RIVERA VS. JOHN DODSON
Jimmie Rivera will look to bounce back from the first loss he's suffered in nearly a decade when he takes on John Dodson at bantamweight. Rivera looked like he was cruising to title contention until he suffered a defeat in his last fight against Marlon Moraes, so he obviously wants nothing more than to get back on track at UFC 228. Dodson has no intentions of allowing him to return to the win column as the former Ultimate Fighter champion wants to stop his current trend of bouncing back and forth between victories and defeats over the past six fights.

CHARLES BYRD VS. DARREN STEWART
Two-time Dana White’s Tuesday Night Contender Series veteran Charles Byrd will look to move to 2-0 inside the Octagon when he faces tough British middleweight Darren Stewart. Byrd has been a dominant finisher in his past three fights, with a trio of submissions on his resume. Stewart will look to stop that trend as he attempts to build on a huge second round knockout win in his last fight in May.

DIEGO SANCHEZ VS. CRAIG WHITE
Diego Sanchez is 27 fights into his UFC career and, by all accounts, he's not looking to slow down any time soon. This time around, the legendary Ultimate Fighter season one cast member will welcome Craig White into the Octagon for his second bout after stepping up on short notice for his debut against Neil Magny. White had four finishes in a row before suffering a loss in his first UFC bout, so he's going to look to add a legend to his resume when he faces Sanchez on Saturday night.

JIM MILLER VS. ALEX WHITE
Jim Miller has faced a murderers row of lightweights throughout his UFC career, but off four straight losses, he has to know how important it must be to get a win this weekend. Alex White certainly stands as a tough test, as he looks to stabilize his own record after bouncing back and forth with wins and losses in his past four fights.

IRENE ALDANA VS. LUCIE PUDILOVA
In a battle of top 15 fighters in the women's bantamweight division, Irene Aldana will attempt to get her second win in a row while going up against Czech fighter Lucie Pudilova, who has picked up wins in two of her first three fights in the UFC. As the 135-pound division continues to build new contenders, the winner of this fight could be poised for a run at the top 10.

JARRED BROOKS VS. ROBERTO SANCHEZ
Looking to snap a two-fight losing streak, Jarred Brooks makes a short-notice return to action this weekend, as he replaces the injured Ryan Benoit. Roberto Sanchez will stand in his way, and the Texas-based fighter will have the home crowd on his side in his first bout since picking up his first UFC win in February, a submission victory over Joby Sanchez.

GEOFF NEAL VS. FRANK CAMACHO
Geoff Neal has earned quite a reputation since joining the UFC roster after his appearance on Dana White's Tuesday Night Contender Series last year. Neal won his fight on the show and then promptly submitted Brian Camozzi in his Octagon debut. Neal will have his hands full at UFC 228 with 27-fight veteran Frank Camacho, who is looking to get back on track following a decision loss in his last bout from January.