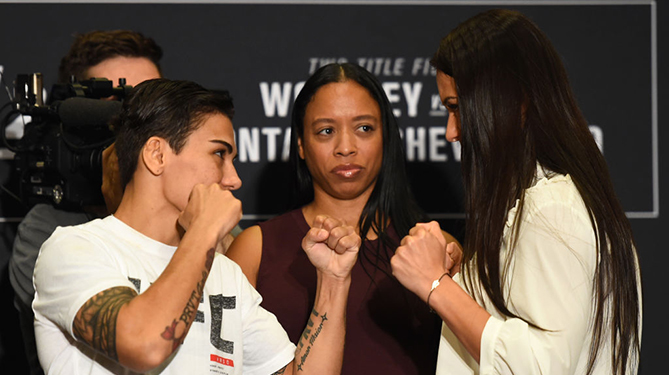 Jessica Andrade of Brazil and Karolina Kowalkiewicz of Poland face off during the UFC 228 ultimate media day on September 6, 2018 in Dallas, Texas. (Photo by Josh Hedges/Zuffa LLC/Zuffa LLC via Getty Images)" align="center" />UFC 228 has a new co-main event, and while a championship belt doesn’t hang in the balance, it does carry title implications.

In the wake of the women’s flyweight title fight between Nicco Montano and Valentina Shevchenko being cancelled on Friday morning, strawweight contenders Jessica Andrade and Karolina Kowalkiewicz have been moved up the card and will serves as the penultimate pairing at American Airlines Arena in Dallas this weekend.

The former title challengers have been circling each other for some time and their clash on Saturday has been one of the most anticipated bouts on the calendar since it was announced.

Sporting a 5-1 record since relocating to strawweight, Andrade has brought the same aggressive, tenacious, high-pressure style that allowed her to amass a 4-3 record during her bantamweight days, despite being drastically undersized for the division.

She earned stunning stoppage victories over Jessica Penne and Joanne Calderwood in her first two forays into the Octagon as a member of the 115-pound weight class, outworked Angela Hill to earn a title shot and has since rebounded with consecutive dominant efforts against Claudia Gadelha and Tecia Torres following her UFC 211 loss to then-champion Joanna Jedrzejczyk.

Every move at her disposal.

Even in her bout with “Joanna Champion,” which took place in the same building where she will compete this weekend, the pint-sized powerhouse never stopped coming forward and managed to have some success late in the contest before ultimately landing on the wrong side of a unanimous decision result. She has looked outstanding since then and remains one of the foremost threats in the division heading into this weekend.

Kowalkiewicz also goes into the bout on a two-fight winning streak, having posted back-to-back decision wins over Felice Herrig and Jodie Esquibel after suffering the first two losses of her career.

Like Andrade, the 32-year-old from Lodz, Poland dropped a decision to Jedrzejczyk despite having some very good moments of her own during their clash at UFC 205 in New York City. Seven months later, Gadelha overwhelmed her in a bout at UFC 212 in Rio de Janeiro where it seemed like Kowalkiewicz just couldn’t get into gear.

She responded with a pair of clean, technical performances against Esquibel and Herrig to re-affirm her standing as one of the top contenders in the strawweight division, and there is a very strong likelihood that the winner of this contest could earn their second crack at claiming UFC gold.

Titleholder Rose Namajunas hasn’t competed since retaining her title with a steely effort in her rematch with Jedrzejczyk earlier this year in Brooklyn. Given their recent results and how things have lined up for others within the Top 10, pairing the winner of Saturday’s contest with the Trevor Wittman pupil at some point in the first half of 2019 appears to be the only direction to take within the division.

While a title shot potentially being on the line sweetens the pot, these two tremendous talents have been primed to bring the intensity and engage in a Fight of the Night caliber battle for longer than this contest has officially been on the books.

Title shot on the line?

Andrade called out Kowalkiewicz following her wins over Gadelha and Torres, in part because it’s the matchup that makes the most sense and brings her closer to challenging for the title again, but also because she claimed the Polish contender turned down a fight with her in the past.

Kowalkiewicz denied the accusation and called for the matchup herself following her win over Esquibel last October, but the timing didn’t work and both ended up taking alternate fights to stay active.

Now they’re set to come together in Dallas and it should be an interesting clash of styles and a tense contest from the outset.

A brown belt in Brazilian jiu-jitsu, Andrade is an opportunistic grappler with a tight squeeze on her guillotine, but prefers to stand and trade. She wades into exchanges without hesitation and rarely throws individual shots, opting instead to work behind combinations and changing levels.

Despite her small stature, the aptly nicknamed “Bate Estaca,” which means pile driver in Portuguese, is one of the most powerful fighters in the division, both when it comes to the heat on her punches and her ability to muscle opponents around in the clinch.

In many ways, Kowalkiewicz is her polar opposite – a patient, tactical, precise kickboxer who rarely overwhelms opponents with sheer force, but instead buries them with a constant stream of punches and kicks. Though she doesn’t have much of an offensive submission game, Kowalkiewicz is still excellent in the clinch and has shown tremendous defensive grappling skills during her seven-fight UFC career, which includes a victory over the reigning strawweight champion Namajunas.

This was always going to be an exciting, entertaining contest and one that carried divisional implications.

Now it’s just moving a little further up the fight card and into a brighter spotlight.