LA’s Novo theater outside the Staples Center, the home of Saturday’s UFC 227 Pay-Per-View event, was the host to free open workouts as unique as the city itself. The defending champions, TJ Dillashaw and Demetrious Johnson, bookended the show with their athletic prowess, while both challengers, Cody Garbrandt and Henry Cejudo used their time on the stage to connect with the lively Angeleno crowd.

Flyweight champion Demetrious Johnson kicked off the proceedings with another one of his high-spirited workouts. Already the UFC record-holder with eleven straight title defenses, he’ll look to make it a previously unimaginable twelve when he runs it back with Henry Cejudo in the sequel to their 2016 outing, an outing where Johnson needed less than three minutes to end Cejudo’s evening. He was asked in the post-fight scrum what he sees in his opponent this time around. 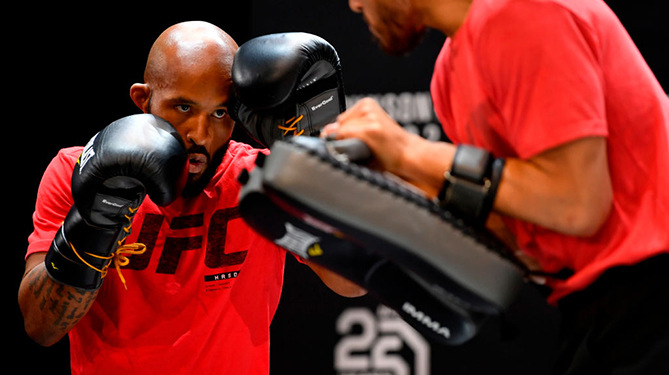 “Henry Cejudo has had two years to get some more fights under his belt. He’s fought Joe Benavidez, Sergio Pettis and Wilson Reis. He looks more patient, more calm about the way he goes about his fights, but the difference is Sergio is a stand-up guy and Wilson is a grappler, but I can mix up both of those things very well.”

Bantamweight challenger Cody Garbrandt opted to use his workout time to do an open Q&A with the crowd, who took turns shouting out their most burning questions from the lighthearted (where Garbrandt gets his hair cut) to the analytical (why this rematch is going to be different than their first meeting). One participant wanted confirmation of the anecdote that the Octagon is the only place where “No Love” feels normal. 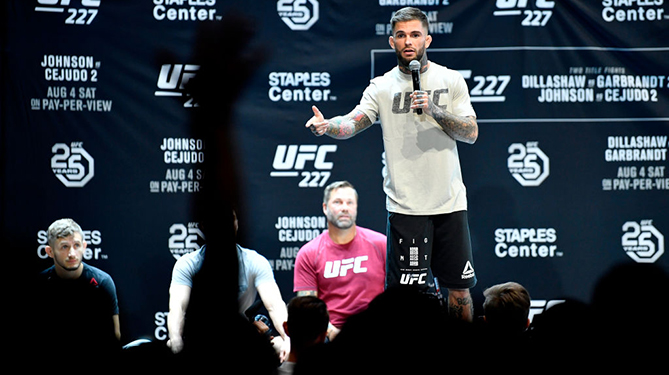 “I feel that’s when the world slows down for me. It’s kinda peaceful and quiet. It’s great, as crazy as that sounds; being locked in a cage with another man who’s trying to take your head off and knock you out. I’ve always felt some kind of serenity inside the Octagon. All the hard work, everything I go through in life, I just put that to the side and go out there and be in a flow-state, fight, and have a good time with it.”

Taking a cue from fellow challenger Garbrandt, flyweight Henry Cejudo also chose to use his allotted workout time to instead have an open discussion with the audience. If the crowd initially hoped to see some of his fight game, it was quickly replaced by their enthusiasm for supporting one of their own.

“I was born in [Los Angeles’] MLK Hospital. My house was actually ten minutes away from the Staples Center. It was a two bedroom apartment, and it was me and my six siblings,” he explained of his humble LA roots.

.@HenryCejudo out here turnin' the mat to a dancefloor! We see you Henry! #UFC227 pic.twitter.com/Fe9K5Ttifo
— Gavin Porter (@PorterUFCnews) August 2, 2018

“I wish I could give you guys a performance here tonight. But we have a fight Saturday, and that’s where I want to display all my heart. And Saturday night, close to 8:45pm, you guys will hear ‘and new.’”

Bantamweight champion TJ Dillashaw closed out the show, and didn’t hesitate to work up a lather with a fierce workout with coach Duane Ludwig.

“I feel great. The weight cut has been easy. Why not give the fans a little show?” 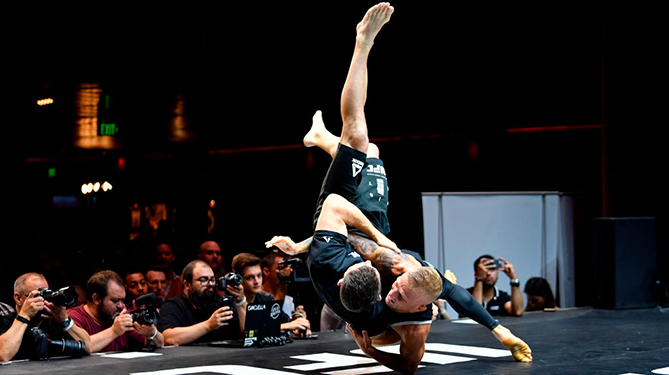 Give the fans a show he did, reminding the crowd of what they came there for and reminding fight fans of a weapon Dillashaw didn’t have to wield the last time around: world-class wrestling.

“That’s the great thing about me being a well-rounded fighter: I can take it anywhere. We’ve worked a lot these last two years [on my wrestling] and I haven’t even gotten to show it off. If the opportunity comes, I would love to give him some on the ground.”

As one would expect from such consummate professionals, all four fighters stayed around until every media obligation had been fulfilled, every fan photo had been snapped and every autograph had been signed. If the event didn’t resemble many of its predecessors, it compensated SoCal in unabashed love.