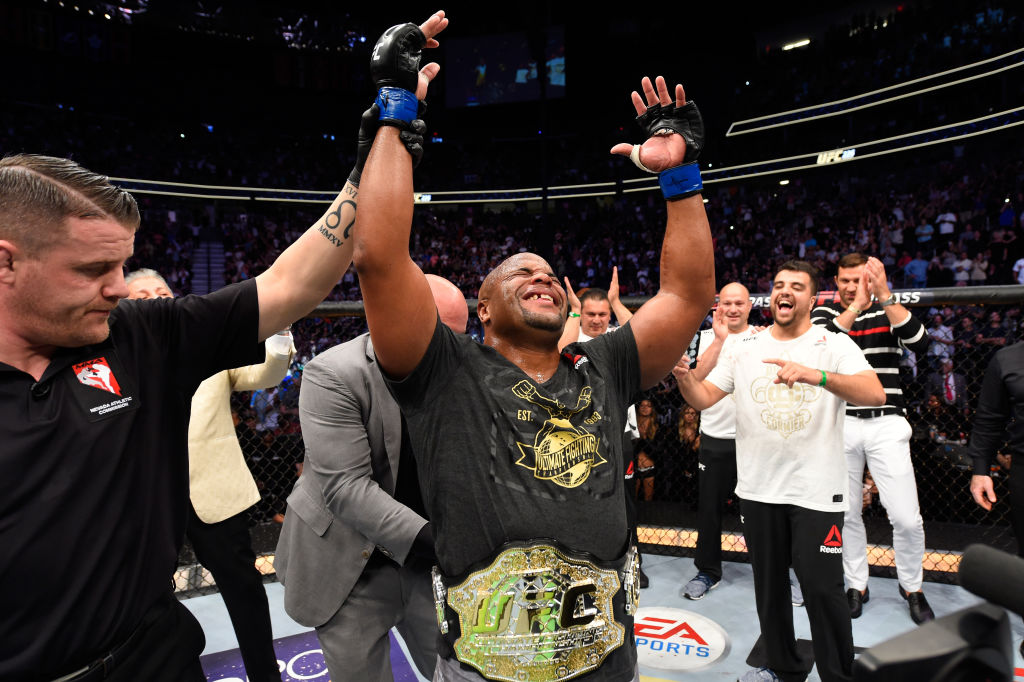 A new heavyweight champion was crowned in the UFC 226 main event as Daniel Cormier became only the second simultaneous two-division title-holder in the promotion’s history as he earned a first-round knockout over Stipe Miocic on Saturday night in Las Vegas.

While he was an underdog on paper, Cormier stepped into the Octagon with confidence that he could defeat the longest reigning heavyweight champion in UFC history.

Through the first few exchanges it looked like Miocic was going to be able to use his size and reach advantage to keep Cormier at the end of his punches. Unfortunately, Miocic couldn't stop Cormier from finding a way inside throughout the fight and it cost him in the end.

With Miocic in pursuit, Cormier uncorked a beautifully timed right hand that cracked the Ohio native on the chin and sent him crashing to the canvas. Cormier followed up with a few more shots before referee Marc Goddard swooped in to stop the contest.

With the win, Cormier now becomes heavyweight and light heavyweight champion while joining Conor McGregor as the only fighters to ever hold two belts simultaneously in the UFC.
Cormier remains undefeated as a heavyweight but he was still a big underdog going into his fight with Miocic, with just 34 percent of fantasy players picking him to win. Cormier did earn those players who selected him an extra 150-point bonus because his victory came in a title fight.

Meanwhile, the co-main event was one of the more bizarre fights on the card as Derrick Lewis defeated Francis Ngannou in a matchup that saw a lot of posturing but not a lot of striking. With each fighter respecting the power of the other one, Lewis and Ngannou didn't throw too many shots over the course of three rounds.

Still, Lewis did enough with the punches and kicks he did land to earn the unanimous decision victory.

Once again, Lewis was a big underdog with just 27 percent of fantasy players picking him to win on Saturday night. Those players who selected Lewis will also walk away with an extra 175-point bonus because he was such a heavy underdog going into the fight.

The upsets kept rolling as Mike Perry earned the first decision win of his career as he got past Paul Felder, who moved from lightweight to welterweight for this fight. Perry was selected by just 34 percent of fantasy players, but he still managed to get the job done in a back and forth war over three rounds.

Former lightweight champion Anthony Pettis also got back on track with a second-round submission win over Michael Chiesa with just 34 percent of fantasy players predicting his victory. The main card filled with upsets was completed as Khalil Rountree Jr. pulled off a stunning first-round knockout against former kickboxing champion Gokhan Saki with only 38 percent of fantasy players picking him to win.

While all five main card fights were considered upsets, the preliminary portion of the event definitely saw at least a couple of favorites walk away victorious.

Undefeated Brazilian knockout artist Paulo Costa added another devastating finish to his resume as he put away Uriah Hall with a second round finish after 70 percent of fantasy players correctly predicted that outcome.

Bantamweight contender Raphael Assuncao was dominant in his decision win over Rob Font with 83 percent of fantasy players picking him, which made the Brazilian one of the biggest favorites at UFC 226.

Both Curtis Millender and Drakkar Klose overcame the odds with wins on Saturday night, as they were each very sizable underdogs.

Millender had just 38 percent of fantasy players picking him, while Klose was only at 28 percent, but both came away with victories by decision.

The early prelims were also split, with Dan Hooker earning his fourth straight win as a lightweight after 70 percent of fantasy players picked him, while Emily Whitmire got the nod over Jamie Moyle with just 23 percent selecting her on the card.

When the night was over, underdogs ruled the day, with eight total fights considered upsets based on the selections made by fantasy players. That means only three favorites were able to get wins, which is the most lopsided result for any card in the UFC in 2018.