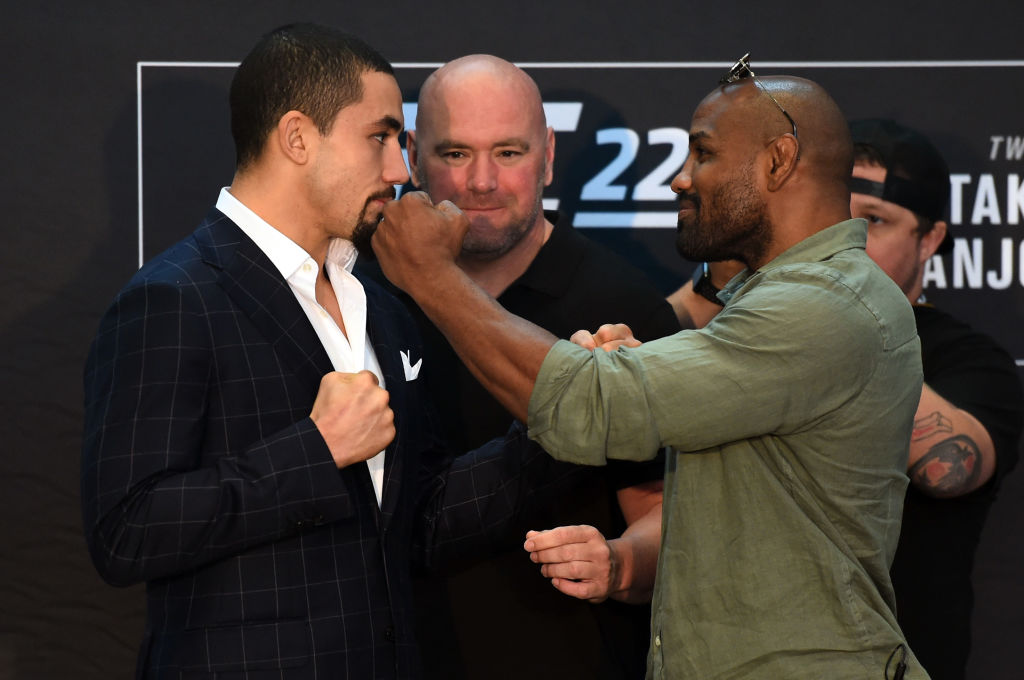 ROBERT WHITTAKER VS YOEL ROMERO
The first time Robert Whittaker and Yoel Romero locked horns last year, it was a nip and tuck battle won by Whittaker via three scores of 48-47. Expect more of the same on Saturday, but while Romero looked scarier than ever in knocking out Luke Rockhold, Whittaker will be a lot more dangerous himself, considering that he fought most of the first fight with an injured knee. Bottom line, enjoy this one between the two best middleweights in the game.

RAFAEL DOS ANJOS VS COLBY COVINGTON
The talk is just about over from Colby Covington. Now he’s got to deliver on fight night, and that will be a tall order against former lightweight champion Rafael Dos Anjos. Clearly the biggest step up for Covington, Dos Anjos has looked better than ever since moving to 170 pounds, but “Chaos” does have the size and wrestling-based style that can nullify Dos Anjos’ skill set. Five rounds is a long time to keep RDA at bay, though.

HOLLY HOLM VS MEGAN ANDERSON
The wait for Megan Anderson’s UFC debut is over, and she’s got the opportunity to make an immediate impact at 145 pounds when she faces former world champ Holly Holm. This is an interesting stylistic matchup given Anderson’s aggressive striking attack and Holm’s effective counterstriking. And while Holm has been in every fight she’s lost, with defeats in four of her last five, she will have to up her work rate to beat Anderson, and if she does that, a heck of a fight might be in store.

ANDREI ARLOVSKI VS TAI TUIVASA
Back in business after a five-fight losing streak, former UFC heavyweight champion Andrei Arlovski has won back-to-back bouts heading into Saturday’s bout with Australian knockout artist Tai Tuivasa, yet with a 9-0 record with nine first-round knockouts, many are predicting that this is the coming out party for “Bam Bam.” Arlovski hasn’t been at the top of the game for this long by accident, though, and if he can make it ugly in the first round and take Tuivasa into waters he’s never seen before, it’s a whole new ballgame at United Center.

CM PUNK VS MIKE JACKSON
Former WWE superstar CM Punk makes his second MMA start on Saturday and the beauty of this fight with Mike Jackson is that we have no idea what either fighter will show up with after long waits since their last visits to the Octagon. That makes for fun viewing.

ALISTAIR OVEREEM VS CURTIS BLAYDES
After surviving the thunder of Mark Hunt in his last bout, Chicago’s own Curtis Blaydes gets thrown right back into the fire with another notable striker in Alistair Overeem. Blaydes has made no secret of his game plan in this one, and it’s the same as it was against Hunt – use his wrestling to put Overeem on his back and keep him there. Overeem does have better grappling than Hunt, though, so it puts the edge back in the court of “The Demolition Man” this weekend.

CLAUDIA GADELHA VS CARLA ESPARZA
The feud between Claudia Gadelha and Carla Esparza has quieted a bit since its height when both were competing for Invicta FC, but there’s still heat between the two strawweight contenders, who enter the bout from different directions. Gadelha is coming off a punishing loss to Jessica Andrade, while Esparza has won two straight. The Brazilian does seem fired up for this one, though, and that’s always a good sign from “Claudinha.”

RICARDO LAMAS VS MIRSAD BEKTIC
Also entering the Octagon from opposite directions on Saturday are featherweight standouts Ricardo Lamas and Mirsad Bektic. Chicago’s Lamas is coming off a scary knockout at the hands of Josh Emmett last December, while Bektic rebounded from the first loss of his career by getting a Performance of the Night finish of Godofredo Pepey. Lamas is a big step up for Bektic, but if he’s as good as we all suspect he is, he’ll have the perfect opportunity to show it against “The Bully.”

RASHAD COULTER VS CHRIS DE LA ROCHA
Heavyweights Rashad Coulter and Chris De La Rocha enter Saturday’s bout with a combined 0-4 record in the Octagon. That’s the bad news. The good news is that with both fighters in desperate need of a win, they’ll be looking for a finish early and often. And yeah, they’ve both ended all their victories before the final horn, so the odds are good that this one isn’t going three rounds.
MORE FROM UFC 225: Whittaker: "I'm ready for war" | Open Workout Recap | Punk: "Luck is for losers"

RASHAD EVANS VS ANTHONY SMITH
Rashad Evans and Anthony Smith were middleweights the last time we saw them. On Saturday, Evans returns to 205 pounds while Smith makes his first UFC start as a light heavyweight. It’s been a rough go for “Suga” over the last few years, as he’s lost four straight, but after two split decision losses at 185 pounds in 2017, maybe a return to the division where he was a world champion is just what he needs. Smith is hungry to get to where Evans once was, though, so he’s be a tough out.

JOSEPH BENAVIDEZ VS SERGIO PETTIS
Number one flyweight contender Joseph Benavidez makes his long-awaited return to the Octagon after an 18-month layoff due to injury, and he’s not getting any warm-up fight, as he meets up with No. 5-ranked Sergio Pettis. This fight could go anywhere and in any direction, but everything depends on how Benavidez looks after a year and a half off.

CLAY GUIDA VS CHARLES OLIVEIRA
A late opponent switch from Bobby Green to Charles Oliveira hasn’t fazed Clay Guida in the slightest, and that’s not surprising, given how amped up “The Carpenter” is to be fighting in Illinois and how good he’s looked since returning to 155 pounds. And frankly, this may be an even better fight than Guida-Green, so expect some wild scrambles and exchanges throughout this one.

MIKE SANTIAGO VS DAN IGE
Illinois native Mike Santiago didn’t get blessed by the good luck wizard in his first two Octagon bouts, first facing featherweight phenom Zabit Magomedsharipov on short notice before meeting Mads Burnell, who came in at 150 pounds for their bout. On Saturday, he’ll gun for his first UFC win in three tries against fellow prospect Dan Ige, a talented Hawaiian who will also be looking to get his hand raised in the Octagon for the first time after losing his debut to Julio Arce.