AMANDA NUNES VS RAQUEL PENNINGTON
Few fighters are as gritty as Raquel Pennington. In and out of the Octagon, she’s proven to have a level of toughness that makes her impossible to break. Talent aside, that’s her biggest weapon in facing the champion of the women’s bantamweight division, Amanda Nunes. So while Nunes will likely blitz her early, if Pennington can get through those first couple rounds and shake off the effects of an 18-month layoff, then it’s a fight, one that will be hard to pick if it goes into the championship rounds.

JACARE SOUZA VS KELVIN GASTELUM
Injuries had “Jacare” Souza considering retirement, but then he found the fountain of youth in the form of a January knockout of Derek Brunson that marked his first fight with his new camp in Florida. Now he’s back in the title picture and he may just secure a crack at the belt with a win over Kelvin Gastelum. Gastelum is in a similar position after his knockout of former champ Michael Bisping, and if he can keep the momentum going against the Brazilian, the TUF 17 winner may be getting his own call for a title shot. 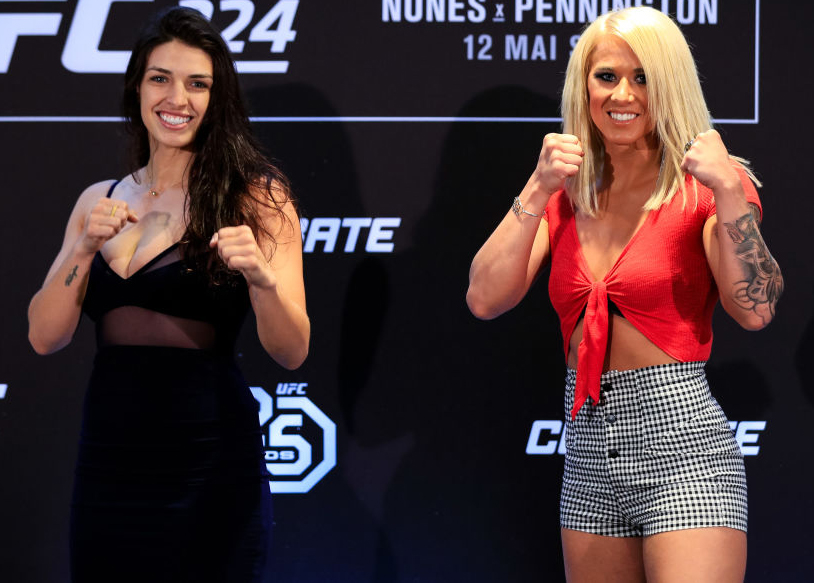 After Mackenzie Dern earned a victory in her UFC debut over Ashley Yoder, you would assume that the hype around her would have died down a little. Nope. The buzz has only gotten louder, and it’s landed her on Saturday’s main card against Amanda Cooper. The question is, will Dern have an easier fight the second time around, or will Cooper be able to take control on the feet and either keep it there, or work her ground-and-pound from the top position? Dern’s looking for a submission in Brazil, but Cooper’s confident that she will get the job done, making this an intriguing showdown in Rio.

JOHN LINEKER VS BRIAN KELLEHER
Brian Kelleher may already be the most unpopular man in Brazil following two victories over Iuri Alcantara and Renan Barao, but the New Yorker really wants to hear some boos on Saturday night, and that will be the result should he defeat local favorite John Lineker. Lineker is a big challenge for “Boom,” but remember that in beating Barao, Kelleher turned back a former world champion who had a longtime place on the pound-for-pound list. That showed how good Kelleher is, and now he’s got the confidence that he can be even better against “Hands of Stone” on Saturday night.

It may be coming a few years late, but this is one of those dream matchups that still hold plenty of interest, especially with Belfort retiring after the bout. So does the explosive aggressiveness of Belfort win the day, or will his flurries leave him open to a fight-ending counter from Machida? Either way, there’s likely going to be someone getting another clip for his highlight reel.

CEZAR FERREIRA VS KARL ROBERSON
Karl Roberson arrived on the scene with a quick win on Dana White’s Tuesday Night Contender Series and followed it up with another finish in his UFC debut. Those victories were impressive enough that there was really no choice but to put him in with a veteran next, and he’s got one in Cezar Ferreira. Ferreira has been erratic throughout his UFC career, but when he puts it all together on fight night, he’s a handful for anybody.

ALEKSEI OLEINIK VS JUNIOR ALBINI
One of my sleeper picks for Fight of the Night pits Aleksei Oleinik against Junior Albini. Oleinik’s record has him pegged as the “ground guy,” and yes, he is a submission specialist, but he’s also not afraid to get into a brawl, and that may be what he has to do to get Albini to the mat. That’s a dangerous game to play with the hard-hitting Brazilian, but “The Boa Constrictor” is willing to play it.

DAVI RAMOS VS NICK HEIN
Back for the first time since September 2016, Germany’s Nick Hein returns against Brazil’s Davi Ramos, and if he defeats the ground ace, that will be four wins in a row, a pretty impressive streak in one of the sport’s toughest divisions.

ELIZEU ZALESKI DOS SANTOS VS SEAN STRICKLAND
The man with the longest name in the UFC, Elizeu Zaleski dos Santos is back this weekend, and that’s good news because he is one of the most exciting fighters in the sport. An offense-minded welterweight who always ends up in compelling bouts, “Capoeira” is in tough with the underrated Sean Strickland on Saturday, but if this turns into a dogfight, it will be hard to pick against the Brazilian.

WARLLEY ALVES VS SULTAN ALIEV
When it comes to welterweight prospects, Warlley Alves has all the talent in the world, but he hasn’t always brought it with him on fight night, making his bout against Sultan Aliev a key one as he begins his 2018 campaign with the intent of starting to move into the top 15 and beyond.

THALES LEITES VS JACK HERMANSSON
One of the Octagon’s steadiest performers, Thales Leites has always been one of those fighters who is durable, skilled and able to pull off a win against anyone on the right night. Jack Hermansson has had a rough time in Brazil, getting stopped by Cezar Ferreira and Thiago Santos, but he’s got a chance to turn that all around and pick up his biggest win to date this weekend.

ALBERTO MINA VS RAMAZAN EMEEV
Alberto Mina is a talented and dangerous fighter. The only problem is that the 13-0 Brazilian has only fought once a year since 2013 and not at all in 2017. That’s not the schedule you want to keep if you want to make a run at the top of your division, but he’s also got pressing matters in the form of Ramazan Emeev, who didn’t exactly set the world on fire in his UFC debut win over Sam Alvey. Expect Emeev to come out with something to prove and Mina to come out with the intention of reintroducing himself to the UFC faithful.

MARKUS PEREZ VS JAMES BOCHNOVIC
Middleweights Markus Perez and James Bochnovic weren’t able to secure a victory in their UFC debuts, but one of them will walk away with their first Octagon win on Saturday night. Perez is an aggressive attacker who will push the pace, while Bochnovic has a sneaky submission game learned under the tutelage of Ben Rothwell and Luiz Claudio. Aggression usually doesn’t work well against sneaky submission artists, but Perez has the power to hurt and get rid of an opponent before he has to pay for it.