Wednesday’s UFC 223 media conference call was a study in contrasts as each of the four fighters on the line brought their own style and their own energy to the line to help set the table for next week’s massive Pay-Per-View event in Brooklyn.

At one end of the spectrum was women’s strawweight champion Rose Namajunas, the ever-mellow titleholder who has become the embodiment of cool over the last several years and especially during the last several months where she’s been connected to the woman she’ll face for a second time next weekend, Joanna Jedrzejczyk.

Asked about her penchant for fighting multiple times each year and whether she intends to hustle back into the Octagon following next Saturday’s contest, the 25-year-old Colorado resident replied, “One day at a time, bro.”

It was an answer that truly sums up where Namajunas is at mentally heading into this rematch – laid back and focused on delivering another stellar performance, but also far more at ease when it comes to the pressures of competing at the highest level in the sport.

“I’d say I always put a certain amount of pressure on myself and that’s because I expect a lot from myself,” said the reigning strawweight champion when asked about the pressure she feels heading into this rematch. “That’s why I’m in the position that I’m in.”

It’s a position that many anticipated Namajunas would reach and while she’s the one who will walk into the Octagon with UFC gold around her waist, the reigning champion is more interested in the here and now and determining who is best than anything else.

“No,” she said flatly when asked if there is anything different about this contest now that she’s entering as the champion. “Obviously it’s a different fight, so there are different scenarios, but I’m always going to be me. My roots aren’t going to change. I might grow and become a better person each day, but I’m still going into it with the same mindset.

Next to Namajunas on the energy and emotion spectrum was Khabib Nurmagomedov, the unbeaten lightweight who faces off with Tony Ferguson in one of the most highly anticipated fights in UFC history.

While the women’s strawweight champion was chill, Nurmagomedov was mostly playful, happy to egg-on his long-time rival and take little jabs at Ferguson whenever he saw an opening, though he did also have a few candid moments where he gave the interim titleholder credit for what he’s accomplished and what he brings to the table.

“It’s very interesting,” began Nurmagomedov towards the end of the call, which featured several prolonged back-and-forth exchanges between the lightweight headliners. “He keeps talking about me because he wants to promote himself. He’s focused on my person, but I’m focused on his fate. Ten days before the fight – stop talking.” 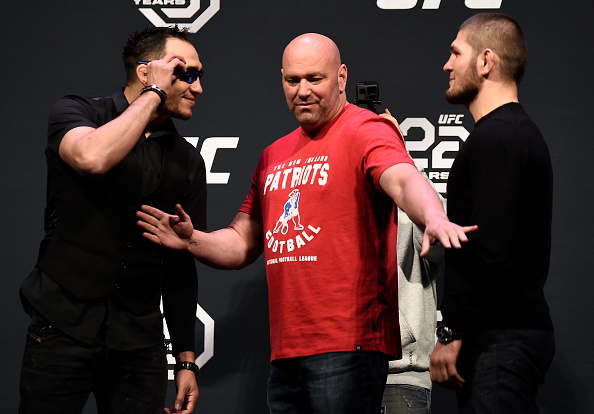 Further down the spectrum from the undefeated Dagestani lightweight sat Jedrzejczyk, who used to be the charismatic, engaging star of these calls during her championship reign, but who seems to have traded that in for a steely demeanor where all her energy is being directed towards reclaiming the title.

Every question that was asked of the Polish standout and every answer that she gave focused on the same points – that things went sideways during her weight cut prior to stepping into the Octagon with Namajunas at UFC 217 back in November and it had an adverse affect on her performance.

For the former champion, that fight was an anomaly and this fight is all about proving that to the masses.

“I would never do that,” Jedrzejczyk responded sharply when asked if she took Namajunas lightly the first time around. “I would not become a UFC champion, I would not defend my title five times if I was not respectful of my opponent.

“I took her very, very serious. She was a big challenge last time, but like I said, the weight cut impacted my body. I don’t care if people are going to say it was my excuse, but only me and my team know what happened that night and how I felt in the Octagon.

“This belt belongs to me and I put on a great camp to prove this to you guys.”
RELATED CONTENT: Rogan & Smith preview Ferguson vs Khabib | UFC 223 Official Trailers: Nowhere to Hide | Not This Time

And then there was Ferguson, who took up residency at the opposite end of the spectrum as Namajunas.

While the women’s strawweight champion was low key and efficient with her answers, the interim lightweight titleholder had his energy cranked up to 11 from the jump and refused to allow Nurmagomedov to say anything without interjecting and questioning his opponent’s talents while putting himself over.

This feels deeply personal to Ferguson, who has been scheduled to face Nurmagomedov three times in the past without ever getting the opportunity to share the cage with the popular grappling standout, and he’s champing at the bit to finally get his hands on his long-time rival.

He even laid out how he was going to do it too.

“I’m going to hit this dude so hard,” forecasted Ferguson. “Before that, I’m going to cut him. I’m going to make him see red. He’s never been cut in his whole entire life and every single one of my opponents, if they piss me off – if they disrespect me, like he has and his family and everybody else in his fan base – they get cut.”

Can it be April 7 already? Please?