On Friday morning, Al Iaquinta was fighting Paul Felder. By the afternoon, he was in a title fight against Khabib Nurmagomedov. That’s how crazy the UFC 223 fight week has been, but on Saturday, we’ve got a five-round fight in the lightweight division, and while Nurmagomedov has to be seen as the favorite, he has had a rollercoaster six days as he waited for an opponent to be secured, and Iaquinta is in a win-win situation. Just making the walk is a victory at this point, and after his first camp in a long time where he was able to train healthy, “Raging Al” is a live underdog with a tricky style, making him someone no one wants to fight on one day’s notice.

UFC President Dana White predicted this rematch might end up as Fight of the Night, and I wouldn’t argue with that opinion. Last November, Rose Namajunas shocked the MMA world with her knockout of the previously unbeaten strawweight champion, Joanna Jedrzejczyk. Now they’re running it back, and Jedrzejczyk sounded more than intense when I spoke to her a couple weeks back. Whether that helps or hurts her may be up to Namajunas, who could play matador to Jedrzejczyk’s bull and calmly make her pay for being too aggressive, or “Thug” Rose could get drawn into a brawl, and even though it was Namajunas winning that war the first time, the striking track record of the former champ still has to keep her as the favorite in a firefight. Interesting times at 115 pounds for sure.

RENATO MOICANO VS CALVIN KATTAR
Rising featherweight stars Renato Moicano and Calvin Kattar collide on the main card, and I’m going to say the same thing about this fight that I did about Kattar’s recent win over Shane Burgos, and it’s that Moicano’s aggression may get the better of him against a patient operator like Kattar. The New Englander doesn’t get rattled, he knows how to adjust during a fight, and he can find openings with surgical precision. Then again, if Moicano blitzes and finishes Kattar early, all that means nothing, and Moicano has the tools to do just that.

ZABIT MAGOMEDSHARIPOV VS KYLE BOCHNIAK
When no one wanted to fight Zabit Magomedsharipov, Kyle Bochniak stepped up, making one wonder just what holes he sees in the game of the dynamic Dagestani featherweight. As of yet, Zabit hasn’t shown any weaknesses in the Octagon on the feet or the mat, but even he knows that Bochniak is a tough kid showing up to throw down, and he’s prepared accordingly. That might be the scariest prospect of all for Bochniak.

JOE LAUZON VS CHRIS GRUETZEMACHER
The Boston Bonus King is back, and Joe Lauzon may be on a quest to break his tie with Nate Diaz atop the UFC’s all-time bonus list when he faces Chris Gruetzemacher. It’s not as high profile a fight as Lauzon is used to, but that never matters to the veteran lightweight, who is fishing for finishes from beginning to end against any opponent he faces. 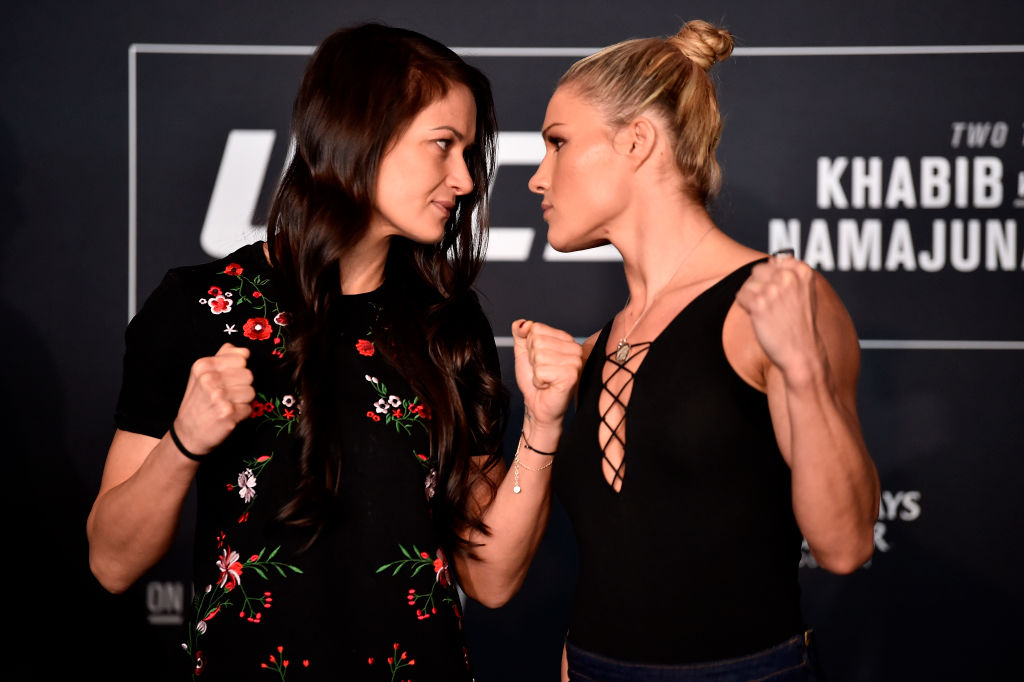 An interesting strawweight bout between Felice Herrig and Karolina Kowalkiewicz headlines the FS1 prelims on Saturday, and given Herrig’s recent resurgence and Kowalkiewicz’ impressive bounce back win over Jodie Esquibel, this may be the toughest fight to pick on the entire card.

EVAN DUNHAM VS OLIVIER AUBIN-MERCIER
Olivier Aubin-Mercier was understandably disappointed when his recent bout with Gilbert Burns was called off, but if he can beat veteran Evan Dunham, it may have been a blessing in disguise, because Dunham already sits in the top 15 “The Quebec Kid” wants to get to. It will be a challenge, though, because Dunham is one of those fighters who can make any opponent’s life miserable for 15 minutes.

BEC RAWLINGS VS ASHLEE EVANS-SMITH
Ashlee Evans-Smith didn’t have the best of luck in the bantamweight division, but if cutting to 125 pounds isn’t an issue, “Rebel Girl” may be able to make some waves in the wide open flyweight class. The first test will be against veteran Bec Rawlings, who is determined to get back in the win column and start her own quest to climb the ladder in the UFC’s newest division.

DEVIN CLARK VS MIKE RODRIGUEZ
The latest member of the New England contingent to make it onto the UFC roster, Mike Rodriguez made quite an impression on Dana White’s Tuesday Night Contender Series, and the promotion must be pretty confident in his ability to succeed in the big show by putting him in with talented prospect Devin Clark, who is looking to rebound from a recent loss to surging light heavyweight contender Jan Blachowicz.