Saturday’s UFC 222 event is in the books, and now that the dust has settled in Las Vegas, it’s time to go to the scorecard to see who the big winners were at T-Mobile Arena. 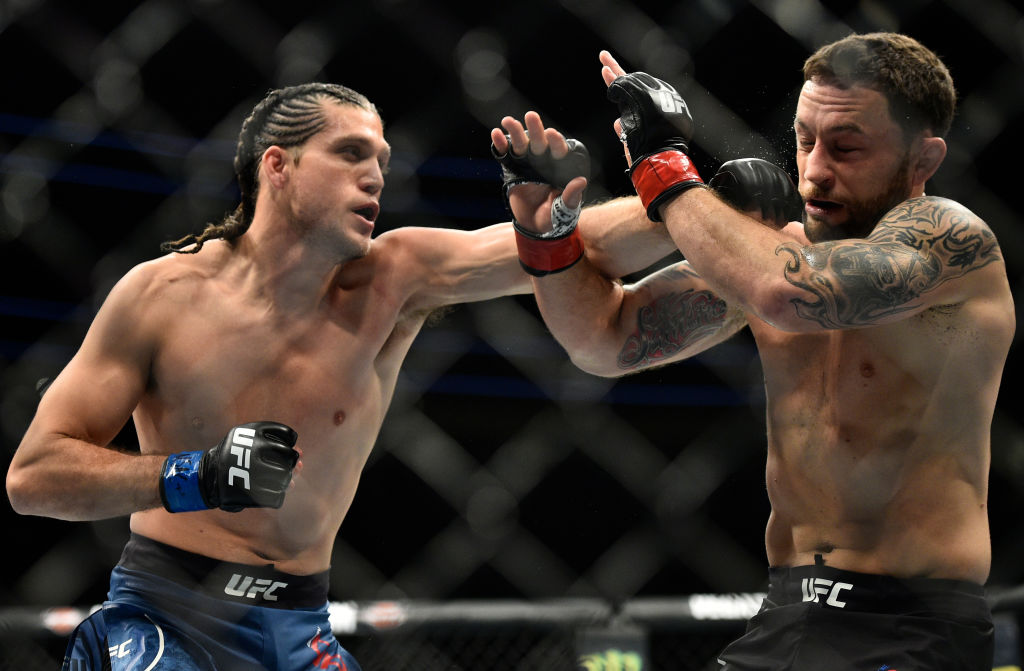 Frankie Edgar during UFC 222 on March 3, 2018. (Photo by Brandon Magnus/Zuffa LLC)" />
I had a lot of pre-fight thoughts about the UFC 222 co-main event between Brian Ortega and Frankie Edgar, and most of the questions focused on “T-City.” Mainly, I wondered if his willingness to put himself in bad situations would cost him against a veteran like Edgar, and more importantly, I thought if Edgar got out of a submission attempt or shook off a flush strike, how would the Californian react? We never got to find out, as Ortega followed up a crisp elbow that hurt Edgar with an uppercut that ended the fight. Ortega is a scary finisher, and if he gets an opponent in trouble, he’s getting them out of there. And when you consider that he did that to Edgar, who has never been finished before, that’s an even more notable feat. Add in a great backstory, a humble attitude and the philosophy of a true martial artist, and Ortega’s breakthrough is nearly complete. All that’s missing is a world title, but he will have to go through Max Holloway to get a featherweight crown, and I can’t wait to see this one, because it has the potential to be a fight we’ll be talking about for years and years to come. 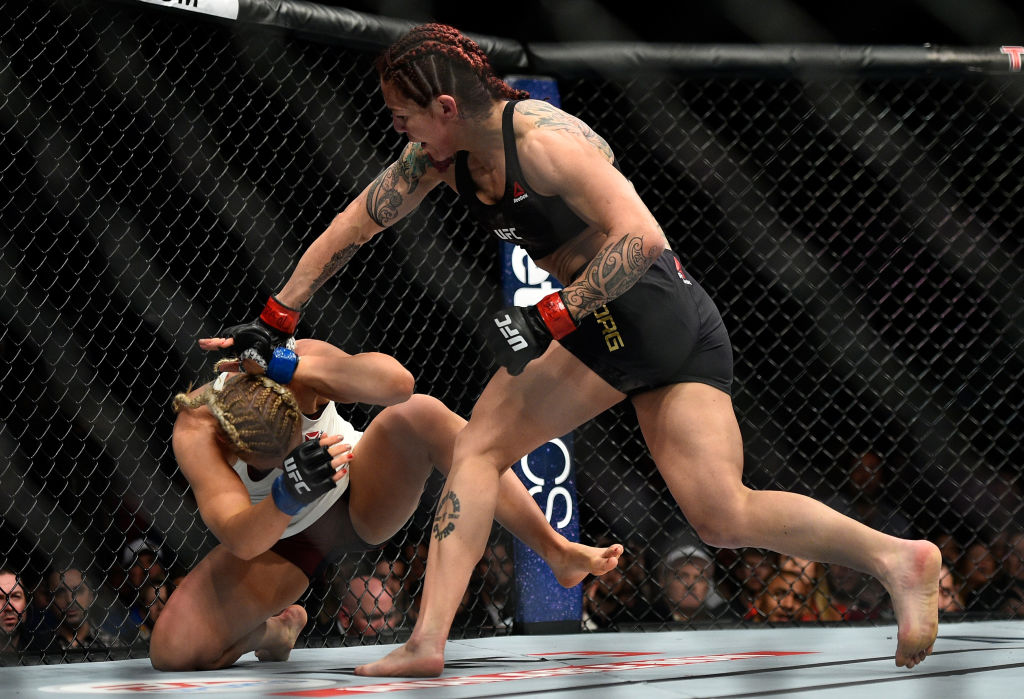 Yana Kunitskaya during UFC 222 on March 3, 2018 in Las Vegas, NV. (Photo by Brandon Magnus/Zuffa LLC)" />A fighter’s greatest gift is timing, and after so many starts and stops over the years, Cris Cyborg is finally hitting on all cylinders. Now you could say that’s been the case for years, but this doesn’t just refer to what happens on fight night. So why is Cyborg’s timing perfect? Well, she’s in the UFC, she has a world championship, and after establishing herself as perhaps the best female fighter ever with her wins over Tonya Evinger and Holly Holm, she brought back old school Chute Boxe Cyborg last weekend with a first-round blitz of Yana Kunitskaya. So, in effect, what she did was draw the fans in, and now she’ll keep them with her reputation as a destroyer more intact than ever. As for Cyborg vs Nunes, that’s THE fight to make, and it’s a SuperFight in more than name alone. 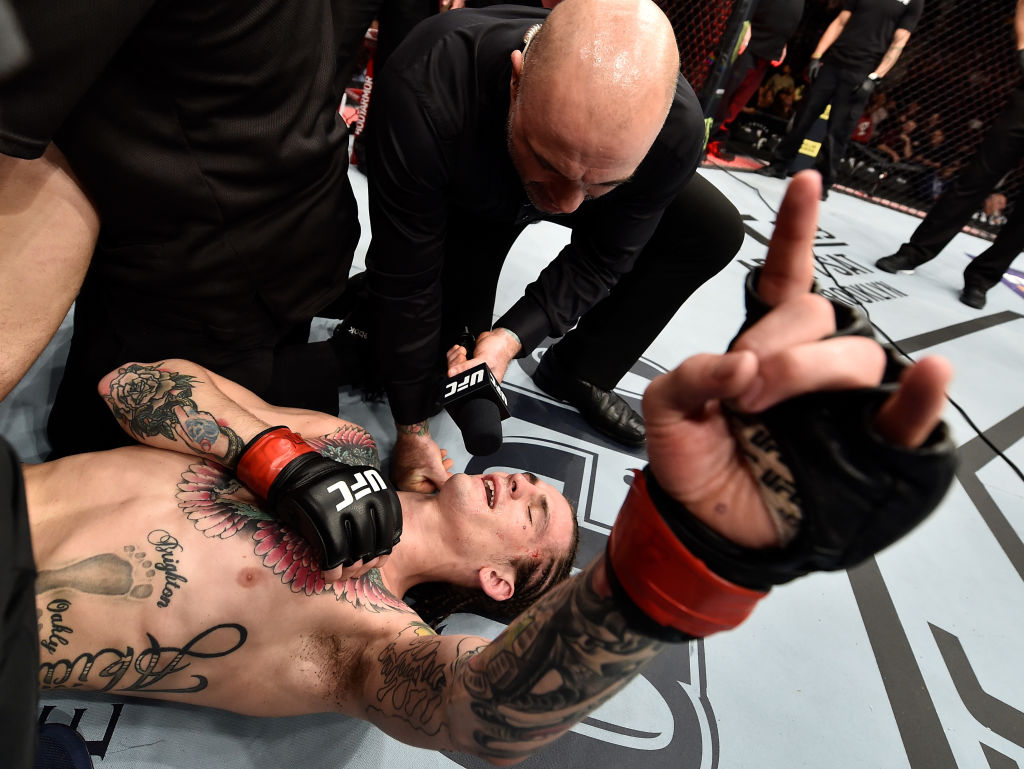 Sean O'Malley is interviewed by Joe Rogan after his unanimous-decision victory over Andre Soukhamthath at UFC 222 on March 3, 2018 in Las Vegas, NV. (Photo by Jeff Bottari/Zuffa LLC)" />Ah, “The Sugar Show” keeps getting better. After taking his notoriety to a new level with his fight week appearance on UFC Embedded and during open workouts, he appeared to be on his way to a another highlight reel win against Andre Soukhamthath before a third-round leg injury made things even more interesting. Now, forced into a fight for survival, O’Malley showed his grit, made it out of the fight and to another win, which he capped off with a classic post-fight interview with Joe Rogan while lying on his back and getting his leg tended to. Simply put, the kid is a star. 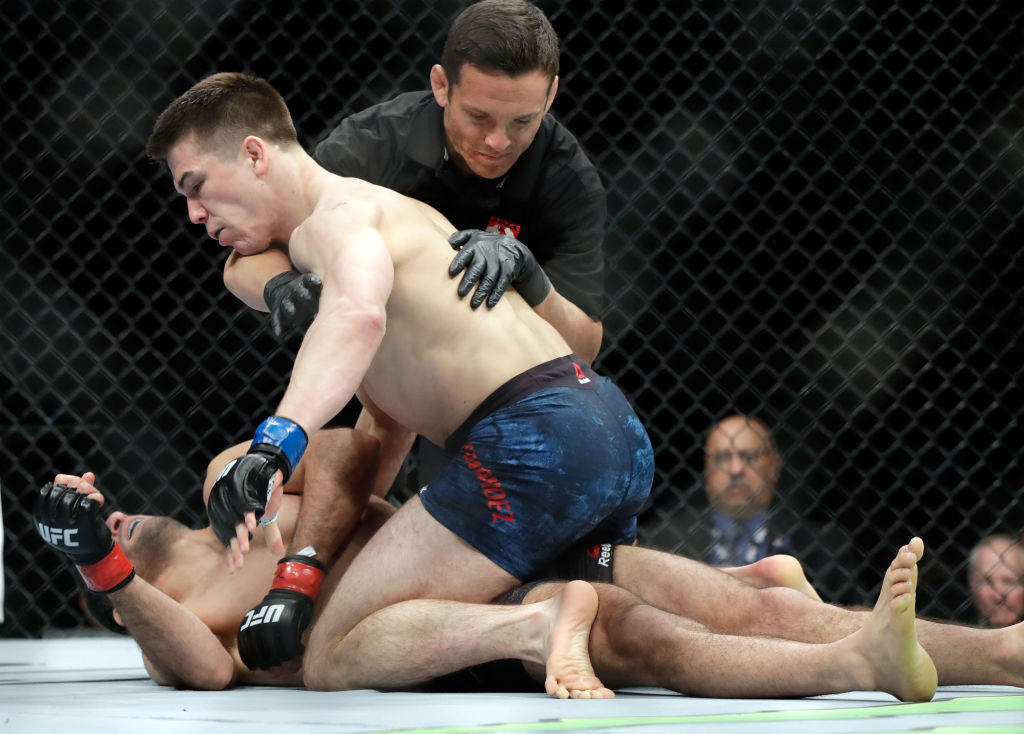 Beneil Dariush (L) and Alexander Hernandez duirng UFC 222 on March 3, 2018. (Photo by Isaac Brekken/Getty Images)
" />If you were a betting man (or woman), Alexander Hernandez had no business beating Beneil Dariush last weekend. Sure, he was a talented prospect, but he was facing a veteran lightweight contender on a little over a week’s notice. But in just 42 seconds, he had scored an emphatic knockout of Dariush, starred on the mic after the bout, and added a jolt to one of the most talent-rich divisions in the sport. Yeah, we’ll be hearing more from Alexander “The Great” in the future.

No, Mackenzie Dern is not the next coming of Ronda Rousey. But she is the first coming of Mackenzie Dern, and that’s not a bad thing at all. In fact, she has the raw potential to someday reach the top of the women’s game and become a legit superstar. That day is not today, but she did show glimpses in her hard-fought win over Ashley Yoder. Yoder was no pushover and she proved it on Saturday, but Dern stayed the course and gutted out a victory that looked to be going south at times. Yes, her striking is a work in progress, and in the UFC she’s going to be matched tough all the time, but if she keeps evolving at the MMA Lab in Arizona, she’s one to watch.