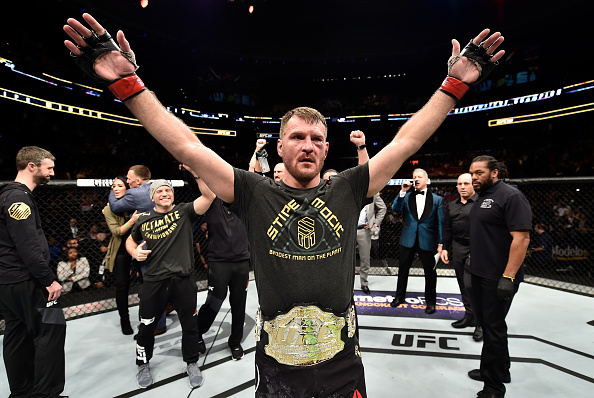 BOSTON
Seemingly up against the unbeatable force, UFC heavyweight champion Stipe Miocic seized his iconic moment by slaying the beast Francis Ngannou at UFC 220 to become the first heavyweight to reach three title defenses.
The accomplishment can’t be overstated. The UFC heavyweight title is the hardest to defend multiple times because any fight can change in the blink of an eye. Cain Velasquez, once regarded as the greatest heavyweight of all time, only managed to defend twice before losing the belt.
Speaking of defending belts, how about “old reliable” Daniel Cormier. One of the fiercest competitors to ever step foot into the Octagon, DC once again proved to be the elite alpha male of the light heavyweight division after disposing of upstart contender Volkan Oezdemir in quick fashion.
It's fitting that Miocic and Cormier defended their belts in what’s become known as the “City of Champions,” because no two men or women embody the meaning of word more.
These are the UFC 220 talking points
Super Fight on the horizon at heavyweight
Sitting Octagon-side for the main event after his teammate Cormier defended his title, former heavyweight champ Velasquez now becomes the dream matchup for Miocic.
Velasquez has been out of action rehabbing a series of injuries, but is back in the gym and working toward a comeback. He likely needs a fight before he gets Miocic, but a matchup between these two all-time greats will be the biggest heavyweight fight in the history of the sport.

Cormier remains one of the greatest
The two loses on the record of Daniel Cormier are to one man: Jon Jones. Many consider “Bones” to be the greatest of all time. Cormier isn’t too far behind him.
The accomplishments in two different weight classes make Cormier a rare champion with a resume featuring names from a 60-pound weight range. His fight I.Q., championship mentality, the example he sets outside the Octagon and his popularity make him a pound-for-pound great.
MORE FROM UFC 220: Miocic and Ngannou Octagon Interview | Cormier Octagon Interview | Miocic sets heavyweight title defense record
Ngannou hype train makes abrupt stop
Francis Ngannou set the stage for the biggest fight of his career with an absolute tear through the heavyweight division. The setback he faced against Miocic may be difficult to stomach in the short-term, but the “Predator” still has a bright future packed with championship potential.
The first round was a firefight and Ngannou foolishly emptied his gas tank in an attempt to display his ferocious power punches. By the time he realized that wasn’t the best approach, the champ has moved into wrestle-mode and suffocated the challenger the rest of the way.
The Ngannou that emerges from UFC 220 will be scarier and more prepared to restart his quest for gold.
Boston’s own turn in a perfect sweep
Calvin Kattar, Rob Font and Kyle Bochniak all took home the big win in front of their hometown fans at TD Garden to help add to a memorable event in Boston. All three were hoping to show out on the eve of the New England Patriots’ big game Sunday against the Jacksonville Jaguars in the AFC title game.
Now all three can sit back, relax, enjoy the game and – most importantly – enjoy a big Sunday dinner after a win in Boston.
Matt Parrino is a digital producer and writer for UFC.com. Follow him on Twitter at @MattParrino