The big one – literally. There’s always something about a big heavyweight title fight, whether it’s MMA, boxing or kickboxing, and Stipe Miocic’s UFC 220 title defense against Francis Ngannou definitely fits the bill. It’s almost funny talking about Miocic setting the UFC record for most consecutive successful title defenses since that number will only be three, but it proves just how tough it is to stay at the top when you’ve got monsters with four-ounce gloves throwing missiles at your head. But if anyone has proven to be resilient enough to take those shots and come back to win, it’s Miocic, who could start hearing some all-time great talk with a win this weekend. But ah, he has to get there first, and Ngannou has been a scary guy thus far, a fact made even scarier knowing that he’s only been training in MMA for a little over four years. But what happens if he doesn’t land one of his hammers early and get Miocic out of there? What if Miocic calls on his college wrestling background and puts “The Predator” on the mat for an extended period of time? A lot of people have crowned Ngannou “King” already, but if it’s not a quick knockout, there are a lot of questions to be asked of him. Miocic has already answered those questions and he’s still standing, so this will either be a spectacular early finish or a war of wills between a proud champion and a hungry challenger.

As I wrote earlier this week, Daniel Cormier’s key to victory against Volkan Oezdemir is simple and it’s right there for everyone to see in the Switzerland native’s lone loss to Kelly Anundson in 2014 – takedowns, takedowns, takedowns, and when Oezdemir slips up, finish it on the mat. Of course, that was nearly four years ago, and Oezdemir has gone from prospect to elite contender in that time, and guess what, I’ll bet he was working on takedown defense in this camp. So maybe it’s not as simple as DC putting “No Time” on the mat over and over for five rounds. I think if DC does get a hold of his opponent, it could very well play out that way, but what Oezdemir has proven in his last two fights is that he has sudden, accurate fight-stopping power and that it comes from the places you least expect it come from angle-wise. And…Oezdemir can land with power without a lot of space to work with. In a clinch fight, that still makes him dangerous, and all it takes is one second of missed focus from the champ, and he could be an ex-champ very quickly. So while the smart money is with DC, Oezdemir is a live underdog.

CALVIN KATTAR VS SHANE BURGOS
I love this fight and I’m glad it’s getting some light on the PPV main card this weekend. And no, it’s not just because it’s a Boston (Kattar) vs New York (Burgos), though that rivalry never hurts things in terms of atmosphere. No, this is a great fight because it’s pitting two talented rising stars against each other in a fight that isn’t striker vs. grappler, but patience vs. impatience. Kattar is a guy who likes to pick his shots and who never seems to change his heart rate throughout a fight. Burgos is the kid in the candy store who can’t believe he gets to fight for a living and you can see his enthusiasm in there. So, does Kattar get drawn into a brawl with Burgos, or can Burgos slow down his pace enough to where he doesn’t get reckless in an attempt to finish? Fun stuff at 145 pounds. 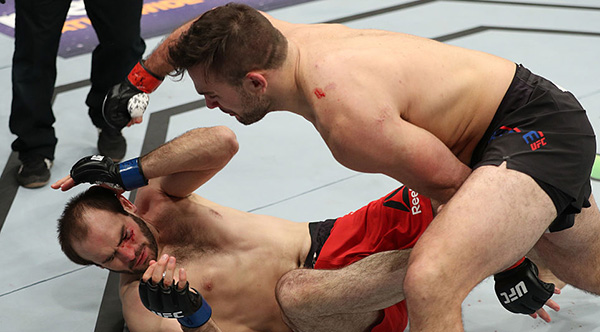 Saparbek Safarov during the UFC Fight Night event on December 9, 2016 in Albany, New York. (Photo by Patrick Smith/Zuffa LLC)" align="center" /> What are the odds that a New Yorker actually gets cheers in Boston? Pretty good if you’re talking about Gian Villante. Now I know New England has a huge Brazilian community that will likely be cheering Francimar Barroso on this weekend, but Villante has that aggressive, no nonsense style that makes it impossible not to like him. Call him Long Island Gronk if you want, and he’s going to be charging forward for three rounds or less in what should be a solid light heavyweight scrap.

THOMAS ALMEIDA VS ROB FONT
Oh boy – when 10pm Eastern / 7pm Pacific rolls around, make sure you are in your seat, in front of your television, or watching on whatever device you bought your PPV on because there is no doubt that Almeida vs. Font will be a barnburner. Yes, Font has found joy in the art of jiu-jitsu, but he’s a puncher at heart and he knows it. And Almeida, well, just look at any of his fights to know where he’s coming from. The question is, will Almeida’s defensive shortcomings of the past haunt him on Saturday? Because if you leave your chin out for Font to hit it, it’s good night.

Before the biggest fight of his career, the one that ultimately got him a UFC contract, Mississippi’s Brandon Davis told UFC President Dana White that he was there to put on a show. That’s gutsy, but he did, beating Austin Arnett to earn a spot on the roster that he’ll break in this weekend against gritty New Englander Kyle Bochniak. Entering his fourth UFC fight, Bochniak has shown glimpses of what he can do in the Octagon, and he’s determined that against Davis, we’ll see more than just flashes of brilliance. These are two young men who show up to throw down.

ABDUL RAZAK ALHASSAN VS SABAH HOMASI
A questionable referee stoppage in their first bout brings Abdul Razak Alhassan and Sabah Homasi back together, and kudos to both guys for taking this rematch – Alhassan for running back a fight he won in the first round, and Homasi for being willing to get in there with his hard-hitting foe a second time. When the first bout was stopped, both fighters had tasted each other’s thunder and it was shaping up to be a possible Fight of the Night candidate. So consider this a continuation of that.

DUSTIN ORTIZ VS ALEXANDRE PANTOJA
Flying under the radar is this really nice flyweight matchup between Dustin Ortiz and Alexandre Pantoja. Brazil’s Pantoja looks like the real deal at 125 pounds after UFC wins over Eric Shelton and Neil Seery, but Ortiz is coming off a 15-second knockout of Hector Sandoval that reminded everyone in the division that you can’t sleep on this Tennessee titan.

DAN IGE VS JULIO ARCE
Two alumni from Dana White’s Tuesday Night Contender Series get their first call to the big show tonight, and Dan Ige and Julio Arce aren’t just looking to make an impression; they want to make it clear that they’re ready for the big show, so expect to see the same urgency both displayed in winning their DWTNCS fights. 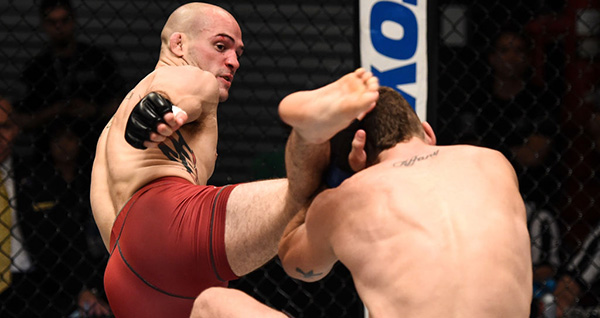 Kurt Holobaugh during Dana White's Tuesday Night Contender Series on July 11, 2017 in Las Vegas, Nevada. (Photo by Brandon Magnus/DWTNCS)" align="center" /> Kicking off the parade of DWTNCS alums on the card, Matt Bessette makes the trip up from Connecticut to face Enrique Barzola. Bessette didn’t really get a chance to shine in his series bout against Kurt Holobaugh, but before that fight, he won seven straight on the regional scene, finishing each victory. Barzola is a tough test for a first-timer though, as the former TUF LATAM winner is 3-1 in the Octagon, with his only loss a controversial split decision defeat against Kyle Bochniak.

ISLAM MAKHACHEV VS GLEISON TIBAU
Highly regarded Russian powerhouse Islam Makhachev saw his bandwagon empty a bit after his upset KO loss to Adriano Martins in 2015, but he’s won two fights since and is still a legit prospect against 155 pounds. So if he’s still got the goods, we’ll know it on Saturday if he gets by returning vet Gleison Tibau, who is making his first start since 2015.