CRIS CYBORG VS HOLLY HOLM
How will the UFC 219 main event between Cris Cyborg and Holly Holm play out on Saturday night? Wish I knew, but I do know that I can’t wait to see two of the best to ever compete in combat sports battle it out for five rounds. There are so many different directions this could go in. If Cyborg goes into “Berserker Cris” mode, that could be Holm’s best chance to win, given her excellent counterstriking game. But Cyborg can take a shot and keep moving forward, so if she doesn’t respect Holm’s power, can she maul her in the clinch and dominate physically? Then again, Holm may be the “Preacher’s Daughter” outside the Octagon, but she has proven – especially in her rematch win in boxing over Anne Sophie Mathis – that if you want to get into a dogfight, she’s more than willing to bite down on the mouthpiece and go to war. In my eyes, it comes down to whether Holm can take Cyborg’s power round after round. If she can’t, it’s a one-sided Cyborg win. If she can, it’s a whole new ballgame.

KHABIB NURMAGOMEDOV VS EDSON BARBOZA
Grappler vs Striker is the easy answer when breaking down Khabib Nurmagomedov’s bout against Edson Barboza, and the result of this pivotal lightweight bout may very well come down to where the fight takes place. If Barboza keeps it standing long enough to batter Nurmagomedov’s legs with kicks, it will hinder the explosiveness of “The Eagle” to get the fight to the mat, and you can’t look at the early going against Michael Johnson and not wonder if Nurmagomedov’s defense is up to the task of eating some shots from the Brazilian. But 24-0 proves that this kid from Dagestan is special, and when you’ve won for that long, if and when Plan A doesn’t work.

DAN HOOKER VS MARC DIAKIESE
On a card filled with important and intriguing matchups, this one between Dan Hooker and Marc Diakiese covers those bases and adds another element – fun. Both lightweight up and comers are offensive minded finishers, and they have a flair for the dramatic when in the Octagon. To me, this is a pick ‘em fight, but I am confident in writing that the winner will go on to even bigger bouts in 2018.
MORE FROM UFC 219: Holm: 'Cyborg is beatable' | Countdown - Nurmagomedov vs Barboza | UFC 219 Watch List | Pre-order and watch on any device

CYNTHIA CALVILLO VS CARLA ESPARZA
The UFC’s first strawweight champion, Carla Esparza has been overlooked over the years due to her lopsided loss to Joanna Jedrzejczyk in 2015. That’s a mistake. Esparza is still one of the top wrestlers in the division, and in unbeaten Cynthia Calvillo, she’s going to be in with a fighter who likes to scrap on the mat. But Calvillo looks like the real deal, and if she can beat Esparza at the veteran’s own game, start getting ready to see her in a title fight some time in 2018.

CARLOS CONDIT VS NEIL MAGNY
Seeing Carlos Condit in the Octagon is always a good thing, and it’s been far too long since we got a good ol’ fashioned scrap with “The Natural Born Killer” in it. But in true Condit fashion, he isn’t making his return from 16 months away with 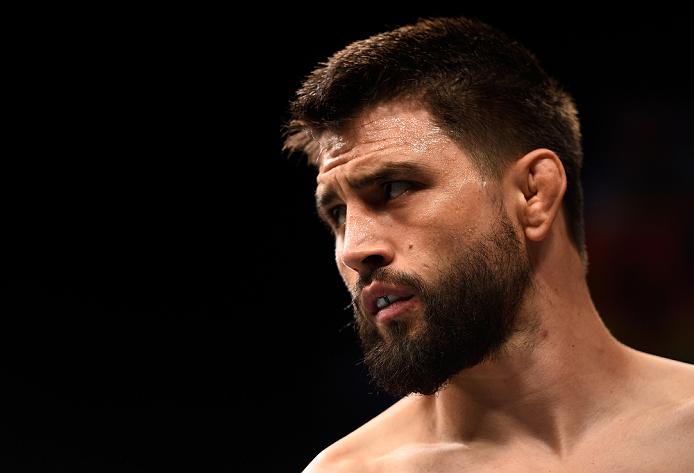 an “easy” fight. In Neil Magny, he will be pushed in all areas of the fight, and if he’s not ready to get down to business, the Coloradan can surge ahead and leave Condit in a position where he has to come back late. The early minutes should tell the tale in this fight.

KHALIL ROUNTREE JR. VS MICHAL OLEKSIEJCZUK
It was expected to be a war when Michal Oleksiejczuk was slated to make his UFC debut against Ion Cutelaba in November, but that bout was a late scratch, putting that debut off to this Saturday in Vegas. Luckily, the potential for a crowd pleasing slugfest still exists with the Polish newcomer taking on Khalil Rountree Jr, but simply put, if Rountree gets his shots off first, it might be a very short night at T-Mobile Arena. He hits that hard.

MYLES JURY VS RICK GLENN
It wasn’t that long ago that Myles Jury had a 6-0 start to his UFC career and was the next big thing at 155 pounds. Then two losses to Donald Cerrone and Charles Oliveira and bouts with injuries and inactivity put him in limbo. An April win over Mike De La Torre at 145 pounds began his comeback, and if he can get past Rick Glenn, 2018 looks bright. But no one just gets past a guy like Glenn, and when you mix his Midwest grit with the training he’s now getting with Team Alpha Male in Sacramento, he’s entering his prime at precisely the right moment. This one could steal the show.

LOUIS SMOLKA VS MATHEUS NICOLAU
It hasn’t been a great run for Louis Smolka as of late, and though a three-fight losing streak could be a reason to hit the panic button, Smolka has the style and smarts that make you feel that he’s on the verge of turning everything around, and he’s got an opportunity to do so against a tough foe in Brazil’s Matheus Nicolau. Back in action for the first time since July 2016, Nicolau has to be ready to go immediately, because if he allows Smolka to get off to a fast start, it may already be too late to recover.

MARVIN VETTORI VS OMARI AKHMEDOV
Moving back to middleweight after going 4-3 in the UFC at 170 pounds, Omari Akhmedov is one of those guys who flies under the radar until you see him fight and then go, “Oh man, I can’t miss his next one.” Well, this is the next one, and you want to miss it, especially since he’s in with a top prospect in Italy’s Marvin Vettori, who may just be able to use Akhmedov’s aggressive style to deliver his own statement-making effort.

TIM ELLIOTT VS MARK DE LA ROSA
Tim Elliott is seemingly always in interesting fights, but there are more layers to this one than usual. First, Elliott is competing for the first time since the untimely passing of his coach Robert Follis, and he’s doing it at bantamweight given the short-notice nature of the bout. On the other side of the Octagon, De La Rosa makes his UFC debut with an unbeaten record and a slick submission game. Could we be seeing Elliott-Louis Smolka Part 2 here? It’s possible.