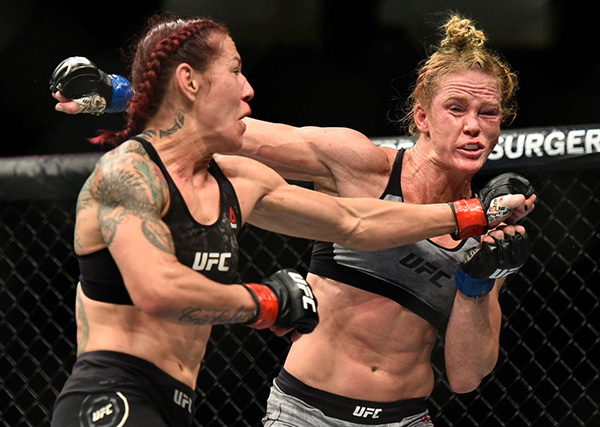 In the first defense of her women's featherweight title, Cris Cyborg was able to get past Holly Holm with a hard-fought five round decision in the final fight of 2017 at UFC 219.

While Cyborg is best known for her dominant performances, Holm was a game opponent, as she gave the champion everything she could handle over all 25 minutes, but she still came up short at the end of the night. Cyborg was smart with every attack she used against Holm, often waiting for the perfect moment to draw her into an exchange before unleashing her best punches.

Cyborg landed power shots numerous times throughout the course of the fight as she snapped Holm's head around with her best punches. By the end of the fight, the entire left side of Holm's face was swollen and busted up courtesy of the Cyborg right hands that came at her often over the course of five rounds.

When it was over, Cyborg earned the unanimous decision victory to retain her 145-pound women's title.

Going into the fight, Cyborg was a solid favorite, with 64 percent of fantasy players picking her to win. An overwhelming majority at 86 percent of those players then picked Cyborg to win by knockout but that means the select few who predicted a decision were enjoying a few extra points by the time the night was over.

In the co-main event, Khabib Nurmagomedov remained undefeated with a lopsided victory over Edson Barboza as the two lightweights battled it out with hopes of securing a title shot in the deep and treacherous 155-pound division. Nurmagomedov punished Barboza through all three rounds with a vicious ground-and-pound attack en route to a dominant win.

Fantasy players were savvy on this matchup, with 78 percent picking Nurmagomedov to win and another 49 percent predicting that he would walk away with a decision.

While the favorites won the main and co-main event, Dan Hooker managed to pull off an upset in his fight against Marc Diakiese after he submitted the highly-touted lightweight in a main card bout at UFC 219. Only 21 percent of fantasy players picked Hooker going into the card, yet he pulled off one of the biggest wins of his young UFC career.

Hooker wasn't alone when it came to upsets at UFC 219, with former women's strawweight champion Carla Esparza becoming the first person to hand Cynthia Calvillo a defeat after six straight wins to begin her career. Esparza was only selected by 26 percent of fantasy players, but she managed to come through with a big win on Saturday.

Speaking of underdog victories, there was none bigger than Neil Magny offering former interim welterweight champion Carlos Condit a rude welcome back to the Octagon after 16 months away. Magny was only picked by 16 percent of fantasy players, with another 71 percent correctly predicting a decision win for the former Ultimate Fighter competitor.

The underdogs just kept on winning on the preliminary portion of the card, with Michał Oleksiejczuk getting past heavy-handed striker Khalil Rountree Jr. Oleksiejczuk was only selected by 18 percent of fantasy players and they also enjoyed an extra 40 point bonus because this was his UFC debut.
MORE FROM UFC 219: Cyborg aces ultimate test | Khabib: 'I'll fight Tony & Conor in same night' | Cyborg: 'I'm still the champion' | Miss the action? Watch UFC 219 with event replay

The favorites finally got back on track with Myles Jury making his long awaited return to the Octagon as he defeated Rick Glenn by decision. Jury was a heavy favorite, with 80 percent of fantasy players picking him to win against Glenn.

The upsets continued with Matheus Nicolau taking out Louis Smolka in a flyweight showdown after just 32 percent of fantasy players picked him to win. Nicolau looked tremendous throughout the fight, although he couldn't quite get the finish in a battle between two flyweights hoping to make an impact in 2018.

One favorite who came through with flying colors was Tim Elliott, who took out newcomer Mark De La Rosa by anaconda choke in the second round. Elliott was selected by a whopping 83 percent of fantasy players, and those who picked him will also get a 50-point bonus thanks to this being a very short notice fight.

At the end of the night, four favorites came away victorious, with five upsets taking place according to the selections made by fantasy players for the final fight card for the UFC in 2017.