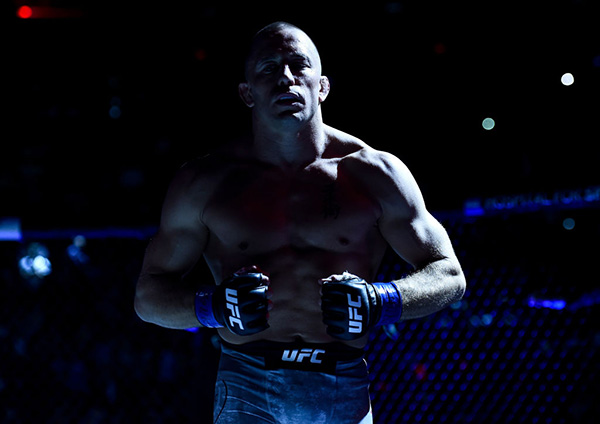 1 – Georges St-Pierre
No one in combat sports – MMA, boxing, kickboxing – should have been able to do what Georges St-Pierre did Saturday night. Even diehard GSP fans had to be wondering what their hero was going to show up with after nearly four years away from competition, but there he was, looking better than ever in the first round against a legit world champion in Michael Bisping. And while Bisping roared back and put the Canadian in some dicey situations in rounds two and three, St-Pierre dug deep, found a left hook that floored the Brit, and then he finished Bisping with a rear naked choke. GSP was now one of only four fighters to win UFC titles in two weight classes, and it was great to see him spend an extended time in the Octagon after the fight to soak it all in. I don’t know what happens next for him, but I’m just glad I got to see what happened last Saturday night, because we won’t see something like that anytime soon – or ever. 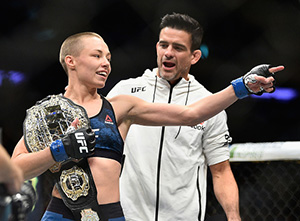 Joanna Jedrzejczyk of Poland in their UFC women's strawweight championship bout during the UFC 217 event at Madison Square Garden on November 4, 2017 in New York City. (Photo by Jeff Bottari/Zuffa LLC)" align="left" />Whenever a champion is on top for a long time, the eventual tendency is to root for the underdog, and that was the case leading up to the UFC 217 bout between Joanna Jedrzejczyk and Rose Namajunas. As much as fight fans love Joanna, as the bout drew closer, there was a feeling that they were starting to sit in Rose’s corner, and on the night, it was Namajunas who stunned the world. Sure, Namajunas has been erratic since her UFC debut (in a title fight, no less), but that’s the price you pay for growing up in public. After Saturday, it may be safe to say that the Milwaukee native is all grown up. Will another long reign at 115 pounds be in store? It wouldn’t be a surprise if there is. 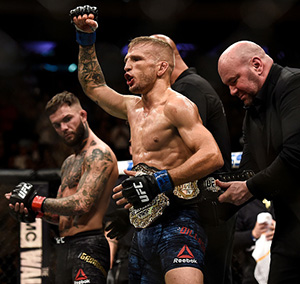 Cody Garbrandt in their UFC bantamweight championship bout during the UFC 217 event inside Madison Square Garden on November 4, 2017 in New York City. (Photo by Brandon Magnus/Zuffa LLC)" align="left" />Once the feel good story of MMA after his upset of Renan Barao to win the UFC bantamweight title, TJ Dillashaw was painted as the villain leading up to his challenge of Cody Garbrandt last weekend after accusations about anything and everything flew at him from his former squadmates at Team Alpha Male. But Dillashaw played it cool, a smile on his face throughout fight week, and after nearly getting stopped at the end of the first round by the heavy-handed Garbrandt, he closed the show on “No Love” in the second. I don’t know if it’s going to be the feel good story of 2017, but it did confirm Dillashaw’s place as one of the best of the best in the UFC, and a SuperFight with flyweight boss Demetrious Johnson would be super. 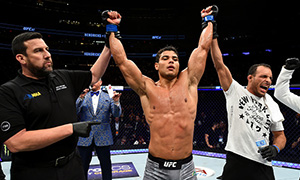 Johny Hendricks in their middleweight bout during the UFC 217 event at Madison Square Garden on November 4, 2017 in New York City. (Photo by Josh Hedges/Zuffa LLC)" align="left" />It takes more than winning at the UFC level to reach superstar status. A fighter has to win in a certain way, and, as superficial as it may sound, looks and charisma do play a part. But at the moment, middleweight Paulo Costa may have all the tools to become the next big star out of Brazil. Throughout his Saturday bout with Johny Hendricks, some guy behind press row kept screaming for “Bigg Rigg” to “knock the Calvin Klein model out.” That didn’t happen, as Costa scored a one-sided second round stoppage of the former welterweight champion. But the point is this: if he’s getting that much of a reaction in his third UFC fight, that’s something you don’t normally see. Beating Hendricks was a big deal, but if he gets his wish for a fight with top contender Derek Brunson, we’ll see once and for all if he’s going to carry the flag for his nation into the future. 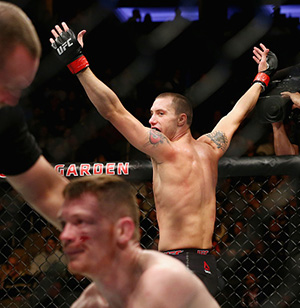 Joe Duffy of Ireland in their lightweight bout during the UFC 217 event at Madison Square Garden on November 4, 2017 in New York City. (Photo by Mike Stobe/Getty Images)" align="left" />James Vick said it best after his second-round stoppage of Joe Duffy: if the top fighters at 155 pounds say they don’t know him after he’s put together an 8-1 UFC record, they’re lying. And if they’re not, they certainly know who he is after he halted fellow top prospect Duffy. With his height, reach and a versatile standup and ground attack, Vick is a scary style matchup for anyone in the lightweight division, and you have to believe that he’s not only going to nab a top 15 ranking this week, but that he’s going to get the big fight he craves the next time out. He’s earned it.