The stigma that’s been puzzlingly placed over the head of flyweight king Demetrious Johnson like a rain cloud for most of his historic title reign seems utterly blasphemous at this point.

At UFC 216, Johnson broke Anderson Silva’s record for title defenses by a UFC champion (11), recording his seventh finish during the streak to become the winningest champion in company history.

That stigma – that Demetrious Johnson is a boring fighter – is complete nonsense. It was never true. “Mighty Mouse” was just ahead of his time, and against Ray Borg, he was a few steps ahead once again. The finish came by submission when, in the fifth round after dominating the fight to that point, Johnson suplexed Borg high in the air before timing a jump mid-suplex to lock on an armbar in mid-air.

Johnson somehow managed to complete the first-of-its-kind submission, offering a truly legendary moment in a career that will one day be remembered as iconic.

A bonus that comes with being the best fighter on the planet is that Johnson has an uncanny ability to break down his brilliance in the aftermath. 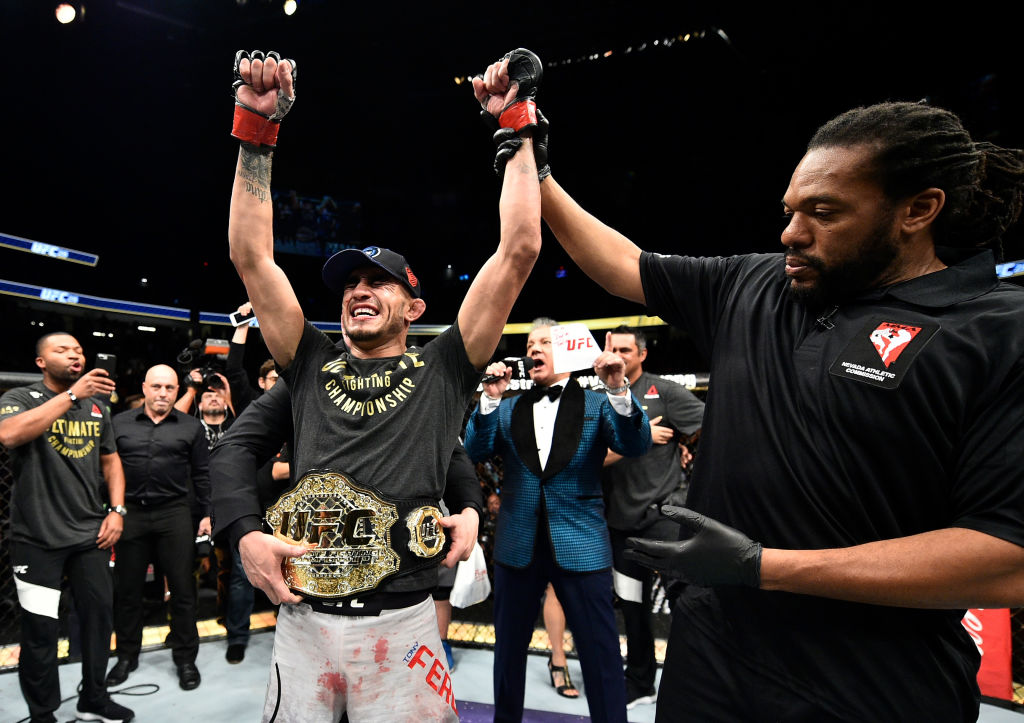 “I don’t show any of my training. It’s none of your guys’ business what I’m doing in the gym. … I was practicing throwing people up (before this fight) – I do it all the time in the gym,” Johnson said. “Ray Borg was like, ‘I’m gonna out-scramble DJ and get on top of him.’ And even when he took me down I was like, ‘OK, you took me down. Are you gonna pass guard? No.’

“Then I elevated him and got back up and I was like, ‘OK, you took me down. That was the best opportunity you had. And then when I had his back he was very planted. … When he shifted he went to throw an elbow and I was like, ‘Got you.’ That’s when I threw him up and landed the armbar.”

These are the UFC 216 Talking Points

The boxing was there at times for Kevin Lee, as was the wrestling advantage and even the speed early on. But in the end, it was Tony Ferguson’s experience and depth that allowed him to extend win streak to 10 in a row and capture the coveted interim lightweight strap.

Lee explained after the bout that he underestimated Ferguson’s jiu jitsu off his back. Heading into the fight I asked Lee what he thought of Ferguson’s proven ability on the ground and he thought he’d shut him down on the canvas.

“El Cucuy” said he wanted to be taken down so he could prove that he is dangerous everywhere and it paid off.

“Going into this fight I knew I had to keep myself composed. I knew he was going to be overly aggressive,” Ferguson said. “I have a lot of experience in this sport and I knew he’d waste so much energy. I just weathered the storm and I felt his shots start to lessen with strength (over time).”

The Boogeyman sets sights on next target

Dana White was impressed with Ferguson’s performance and thinks it’s only right that the lightweight title be unified soon. White said Conor McGregor might even be open to fighting this year.

Ferguson is open to fight anybody but admitted the fight to make is with McGregor.

“Conor McGregor poses no threat to me,” Ferguson said. “I’ll ankle pick him. No problem. I’ll set him on his ass and everyone is the same size on the ground. That boy is scared. He’s never mentioned my name, not one time. The fight is with Conor. You can’t run anymore, man. You’re in check and I’m great at chess.”

Johnson on what record means

For the entirety of his record-breaking run to 11 title defenses, Johnson barely wanted to discuss the run he was on. He focuses intently on one fight at a time and that mindset has paid off. 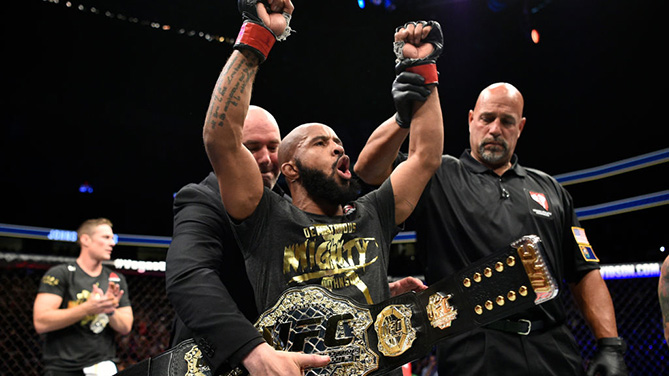 But after hitting 10, he realized he was right there and allowed to think about the accomplishment. It felt awesome.

“It just feels really good to not be able to hear Anderson Silva’s name next to mine anymore,” he said. “They’ll be like, ‘Who has the longest reigning title defenses?’ Demetrious Johnson does.

White said Johnson is the greatest of all time.

“You guys know what a crazy jiu jitsu guy Joe Rogan is and he was up in the ring and he said, ‘I’ve never even seen that in a jiu jitsu match,” White said about Johnson’s submission. “He goes, ‘That was crazy. This guy is a freak.’ And it’s true. Demetrious is the best. He broke Anderson Silva’s record and he did it in spectacular fashion.”

About 1,500 first responders and a half dozen victims affected by the tragic event last week in Las Vegas attended UFC 216 to enjoy the fights and be honored by the UFC and fans in attendance.

The week has been a sad time for the city, but as White explained, the tragedy brought the community together.

“I’m trying not to think about it anymore but I’ve been saying all week that I’m really proud of this city,” White said. “How everyone has reacted to this thing, from the first responders to the people just there helping other people. The way that the big (companies) stepped up and threw in money – it’s a big deal. Everybody thinks this isn’t a real community but this is the realest community.”