Tony Ferguson has waited a long time for his time to shine with a championship belt on the line, and that time has finally arrived as he faces Kevin Lee for the interim UFC lightweight crown. Even without the high stakes involved, this is an interesting matchup of two of the best 155-pounders in the game because while Ferguson has the experience and talent to be rightfully considered the favorite, “El Cucuy” can let his aggression get the better of him at times. That leaves openings for Lee to capitalize on, and while others have failed in finishing off Ferguson when he made mistakes, “The Motown Phenom” isn’t likely to let him off the hook should he get the opportunity to strike, either on the feet or the mat.

Saturday’s UFC 216 card is filled with intriguing matchups, but if you had to give a buddy one reason to tune in, it’s this: history. Whether Demetrious Johnson makes it or Ray Borg breaks it, something special is going to happen in Las Vegas. Of course, any chance to see “Mighty Mouse” in action is an opportunity to be reminded why you’re an MMA fan, but now he’s on the verge of setting a new record for championship excellence while a hungry challenger attempts to shock the world and start his own reign. This can turn into edge of your seat stuff in rapid-fire fashion considering everything that’s on the line here. 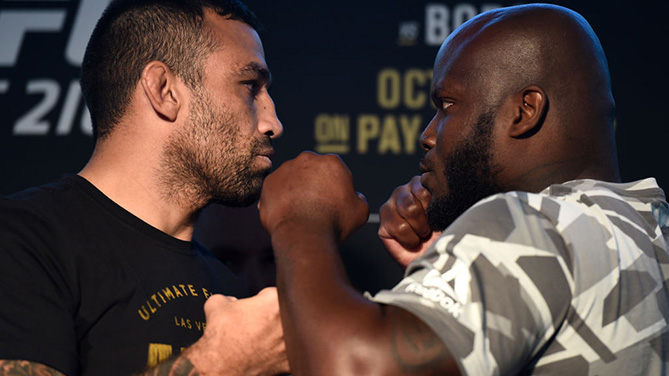 After a very short-lived retirement, Derrick Lewis returns to face his toughest test to date in former world champion Fabricio Werdum. Werdum has his sights on a rematch with Stipe Miocic, and a jaw-dropping win over “The Black Beast” will put him closer to that goal. But if Werdum is overlooking Lewis – even slightly – it can be a one way ticket out of the title race because Lewis has the stopping power to end any heavyweight’s night. Werdum is saying all the right things leading up to the fight, though, and if he’s focused and can get through the opening five minutes, his gas tank may help him surge late and hold Lewis off.

Paige VanZant and Jessica Eye may not be giving fight fans a look at what’s to come from the women’s flyweight division, but Mara Romero Borella and Kalindra Faria were more than eager to step in, and they are expected to bring the heat and get everyone ready for the division that will crown a new champion at the TUF 26 Finale later this year.

The first of my sleeper picks for Fight of the Night pits lightweight contenders Beneil Dariush and Evan Dunham against each other. Both highly underrated, these guys are of the mindset that there will be no Fight of the Night, only a Performance of the Night bonus on Saturday night. That means both fighters will be looking to end the bout from start to finish, and if that’s the case, my initial thought on this one should be proven correct. And then both guys get a bonus. 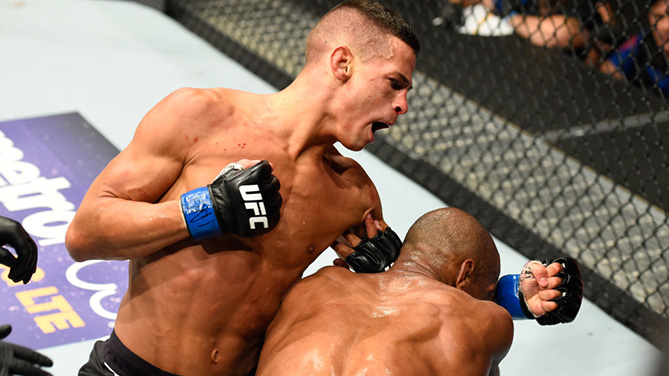 Tom Duquesnoy proved in his first Octagon bout against Patrick Williams that the hype was real, and his offensive-minded attack made him an instant fan favorite. Of course, a style like that can make a fighter vulnerable, especially against an opponent like Cody Stamann, who enjoys the cerebral part of the game. So who wins – the offensive machine or the cerebral assassin? It’s hard to pick, but it will certainly be fun to watch.

WILL BROOKS VS NIK LENTZ

Will Brooks and Nik Lentz weren’t regular training partners when they shared the mats at the American Top Team gym, but there is plenty of intrigue about this clash of former teammates this weekend. Lentz left ATT earlier this year to train with Henri Hooft and the Combat Club squad, so it will be interesting to see if he implements more striking into his attack. As for Brooks, he’s had a rough stretch since coming to the UFC, getting finished in his last two bouts, making winning by any means necessary imperative.

Three UFC fights, three post-fight bonuses. Will Lando Vannata keep his streak going against veteran Bobby Green? That may depend on Green, who has proven to be hot or cold on fight night. If he’s hot, we may be looking at a Fight of the Night that can go either way. If he’s cold, Vannata may pick up a Performance of the Night bonus for his trouble.

On paper, this one looks like a striker (Botelho) vs. grappler (Gonzalez) showdown, but Chicago’s Gonzalez is a former Golden Gloves winner who has some hands, so if she can use her striking to set up her ground attack, it may be enough to spoil the UFC debut of Brazil’s Botelho.

Walt Harris has had a rollercoaster start to his UFC career, but after back-to-back knockouts of Chase Sherman and Cyril Asker, “The Big Ticket” looks to be in a groove and ready to make a run at the heavyweight top 15. A win over Mark Godbeer might not get him there, but it wouldn’t hurt.

I know John Moraga doesn’t want to be seen as a gatekeeper at 125 pounds, but he is the one who’s going to prove whether hot prospect Magomed Bibulatov is ready for prime time or not. Bibulatov looks like the real deal, but until he gets by a seasoned, tricky vet like Moraga, the jury’s still out on him.

Two vets of the middleweight division meet in this one, and it should be a clash of styles to watch between Thales Leites and Brad Tavares. Tavares is proving to be a late bloomer in the 185-pound mix, and if he can defeat the former world title challenger, it will be a significant feather in his cap as 2017 comes to a close.

Former TUF 24 competitor Matt Schnell needs a win badly after knockout losses in his first UFC bouts. Luckily for him, Marco Beltran is an opponent he won’t have to look hard to find in Saturday’s opener. That’s the good news. The bad is that Beltran won’t have to chase Schnell either, so this one may come down to who lands first.