A new interim lightweight champion was crowned on Saturday night in Las Vegas after Tony Ferguson submitted Kevin Lee in the third round of the UFC 216 main event.

The fight served as Ferguson's 10th victory in a row as he took home his first championship in the UFC following a back and forth battle with Lee.

"The Motown Phenom" showed up ready to snatch that title after he took Ferguson to the mat in the first round, moved into the mount and began raining down a barrage of punches and elbows. Unfortunately for Lee, he was unable to secure the finish and that allowed Ferguson to come roaring back.

RELATED: Watch it all go down once again by ordering the UFC 216 replay now

Following a takedown from Lee in the third round, Ferguson showed off his slick Brazilian jiu-jitsu by first going for an armbar before transitioning into a beautiful triangle choke that trapped Lee with no chance to escape. Lee was forced to tap out, which meant Ferguson could celebrate as he now had UFC gold wrapped around his waist.

Going into the card, fantasy players had placed a lot of faith in Ferguson, with 85 percent picking him to defeat Lee, which is exactly what he did on Saturday night. Because it was also a title fight, the matchup between Ferguson and Lee also accounted for an additional 150 points for the players who correctly predicted the main event.

In the co-main event, Demetrious Johnson secured his place in the history books as he broke the all-time record for title defenses with his spectacular submission finish over Ray Borg. Johnson finished the fight with a huge suplex while simultaneously transitioning into an armbar that forced Borg to tap out. With the win, Johnson surpasses Anderson Silva with 11 successful defenses of the flyweight title.

Johnson was definitely an overwhelming favorite going into the card, with a whopping 94 percent picking him to win. Once again, because it was a title fight, an additional 150 points were handed out to the players who correctly picked Johnson as the winner.

In a battle of newcomers, Mara Romero Borella got her UFC career off to a good start with a quick submission finish against Kalinda Faria in a women's flyweight fight. Borella was actually a slight underdog according to fantasy players, with only 40 percent picking her to win, but she was very impressive in her first appearance inside the Octagon. 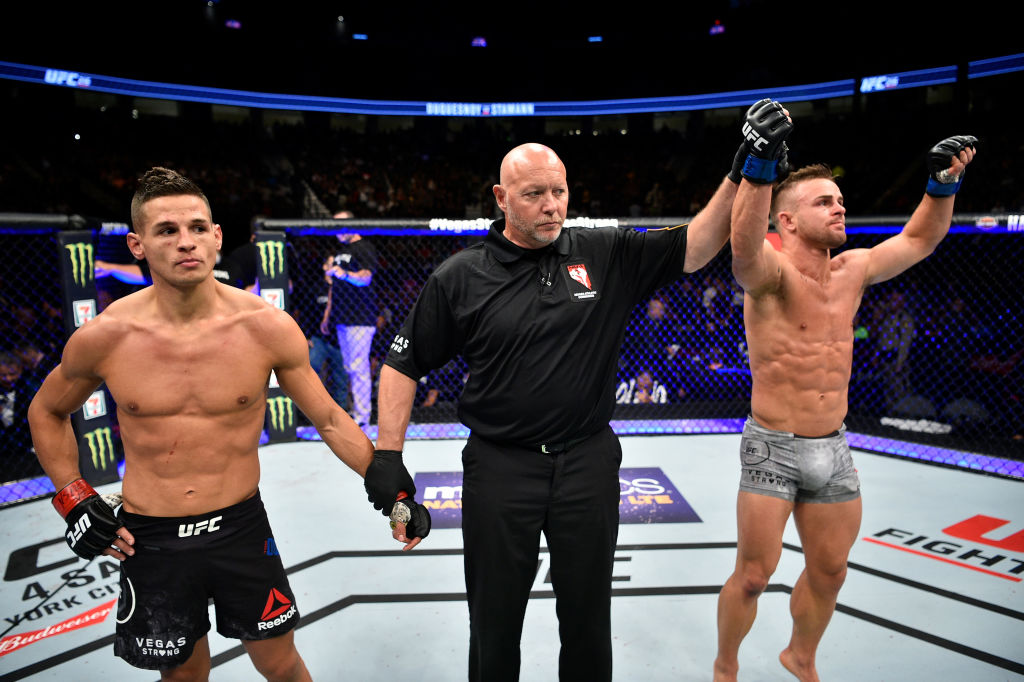 Perhaps in the most shocking upset on the entire card, Cody Stamann got the nod over highly touted prospect Tom Duquesnoy in a bantamweight showdown on the UFC 216 prelims. Stamann was only selected by 28 percent of fantasy players with another 71 percent correctly predicting that he would win by decision. It was a huge win for Stamann and also for the fantasy players who picked him going into UFC 216.

The string of underdog wins continued with Poliana Botelho picking up a win over Pearl Gonzalez in a strawweight matchup. Botelho was selected by only 31 percent of fantasy players but she also earned those who picked her an additional 40 points because it was her first time fighting in the UFC.

Speaking of upset victories, John Moraga put on one of the most stunning performances all night as he flattened flyweight standout Magomed Bibulatov with a crushing first round knockout in an early prelim matchup. Moraga was picked by just 39 percent of fantasy players as he took out a prospect in Bibulatov, who was long considered a top threat to anyone in the flyweight rankings in the UFC.

While the upsets were certainly pouring in at UFC 216, Brad Tavares and Matt Schnell got the night started off right for the favorites as they both got wins in the early prelims. Tavares picked up a victory over Thales Leites with 72 percent of fantasy players picking him while Schnell was able to get his first UFC win over Marco Beltran with 63 percent of players selecting him going into the night.

All told, by the end of the night - while also considering two draws that took place at UFC 216 - four favorites came away victorious while four underdogs also got the job done on Saturday night in Las Vegas.