Maybe it’s because they’ve already been through the media paces to promote their flyweight title clash once before, but neither Demetrious Johnson nor Ray Borg had much to say during Thursday’s UFC 216 conference call. 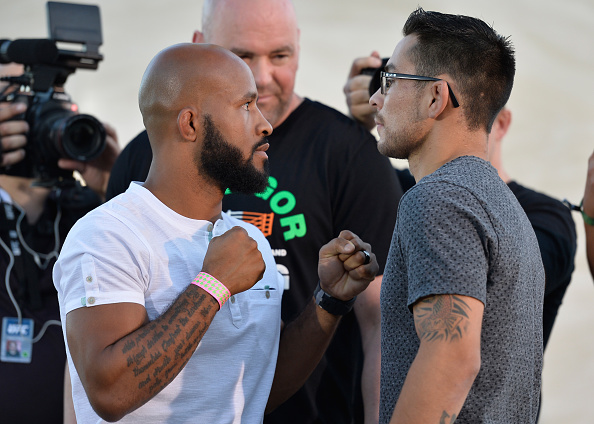 While the stakes in the Oct. 7 co-main event remain as significant as they were last month in Edmonton before the contest was unfortunately called off, the only questions the champion and challenger faced were about the illness that sidelined Borg and what might happen if he were to show up and miss weight next weekend.

“The diagnosis? I don’t know, I’m not a doctor,” Borg said when prompted for specifics about the bug that prompted last month’s bout to be scuttled. “(The UFC doctor) told me that I had a flu virus and that was it. I was throwing up – I had the shakes, I had the shivers – and it wasn’t like no weight-cutting type sickness. I just got the flu.

Mellow and levelheaded as always, the reigning flyweight champion did his best to bring some perspective to the situation.

“Guys, it’s only been four weeks,” said Johnson when asked if he still considered Borg to be a deserving opponent. “Nothing has changed. He got sick; it happens. It’s happened multiple times, not just in this division, but in other divisions.

“I’m happy the UFC got it rescheduled super-fast and I’m still just worried about myself.”

RELATED: DJ One Fight From Immortality | Six Times Kevin Lee Rocked It | The String Of Title Bouts Remaining In 2017

While the penultimate pair of fighters to cross the threshold into the Octagon at the first of three UFC events scheduled for October kept things short, sweet and to the point, their lightweight counterparts took a more verbose approach to things on Thursday.

Interim title challengers Tony Ferguson and Kevin Lee were more than happy to go back-and-forth throughout the call, interrupting each other and hammering home their respective thoughts on what their opponent brings to the table, what makes them the better man and how things will play out once they finally hit the cage next weekend in Las Vegas. 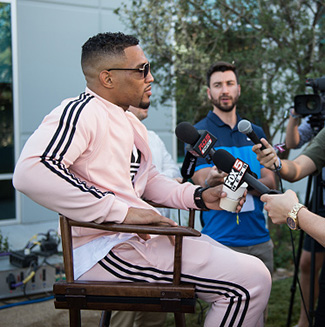 “I believe I’m the best lightweight in this division; I don’t know about Kevin,” said Ferguson, who enters his bout with Lee riding a nine-fight winning streak and stationed at No. 2 in the 155-pound rankings. “I know for sure that I’ve earned my place here.

“He’s an athlete and we come from the same kind of background,” he said of his Lee, who attended Ferguson’s alma mater, Grand Valley State University, before leaving with two years of eligibility remaining in order to pursue his mixed martial arts career. “You can talk your way up into a title fight, you can do everything else, but once that door locks, he’s going to have to deal with me.”

The seeds for next Saturday’s championship main event were first sown following Lee’s victory over Michael Chiesa in June, when Ferguson was serving as an analyst for the FS1 broadcast and was dismissive of the 25-year-old upstart’s championship credentials. 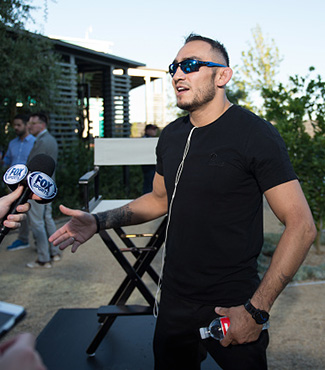 Ferguson’s initial question didn’t land well with Lee, who requested to speak with “a real journalist,” which kicked off a back-and-forth between the two that has carried over to the eve of their encounter at UFC 216.

“I’m going to beat Tony bell to whistle,” said Lee. “The man is already over the hill; he’s 33. I feel like I’m the real king around (here). I’m just 25. I’m just getting started. I keep getting better; he keeps getting worse.

While the assessment made the surging former Ultimate Fighter winner chuckle, Ferguson wasn’t going to let Lee offer his thoughts on how things would transpire without countering with some ideas of his own.

“Keep talking, kid,” said Ferguson, continuing to focus on Lee’s age and what he views as inexperience. “The only thing you’re going to walk out on is a gurney, Kevin Lee.