UFC women's bantamweight champion Amanda Nunes needed all five rounds on Saturday night to eke out a hard-fought split decision over No. 1-ranked contender Valentina Shevchenko to earn her second successful title defense in the main event of UFC 215.

It was a grueling, back and forth affair that saw Nunes as the aggressor throughout the entire fight as she stepped forward while attempting to use her power and reach to hit her shorter opponent. Shevchenko fought smart, however, and fired back with fast, stinging combinations while countering the champion.

Scoring the fight was impossibly tough, but it appeared Nunes edged out the victory with a strong fifth round where she landed a pair of takedowns that put Shevchenko on the mat until the final horn sounded. When it was over, Nunes was declared champion while Shevchenko was already thinking about a third fight with her down the road.

Despite walking into the fight as the incumbent champion, Nunes was the underdog according to the selections made by fantasy players, with only 42 percent predicting that she would hold on to the title. Still, Nunes got the job done while also earning an extra 150 points for those players who picked her in the championship fight.

In the co-main event, Rafael Dos Anjos made short work of No. 6-ranked welterweight Neil Magny with a first-round submission as he moved to 2-0 since going up to 170 pounds. Dos Anjos has looked better than ever lately as he continues to stalk a second title after once reigning as lightweight champion.

Dos Anjos was a heavy favorite going into the night, with 68 percent of fantasy players picking him to win as he picked up a very impressive victory over an always game opponent in Magny.

Former title challenger Henry Cejudo picked up a huge victory at UFC 215 as he knocked out Wilson Reis in the second round while stopping his recent two-fight skid. Cejudo was one of the heaviest favorites on the main card, with a whopping 85 percent of fantasy players picking him to win as he takes one more step towards returning for another shot at champion Demetrious Johnson.

Ilir Latifi also had a very impressive outing on Saturday night, as he handed Tyson Pedro the first loss of his professional career via three-round decision. Latifi was selected by 59 percent of fantasy players going into the night as he gets back on track following a loss in his last trip to the Octagon.

In the kickoff bout to the Pay-Per-View main card, Jeremy Stephens put on one of his best performances to date as he defeated the always-tough Gilbert Melendez over three rounds in an exciting featherweight showdown. Stephens was actually rated as a slight underdog according to fantasy players, with 44 percent picking him to win, while he also earned an extra 120 points because it was such a closely contested matchup.

On the preliminary card, Ketlen Vieira definitely pulled off one of the biggest surprises of the night as she took out former title challenger Sara McMann with a second-round submission. Vieira was only selected by 18 percent of fantasy players going into the night, but it's likely she won't be nearly as underrated the next time after picking up a huge win over McMann at UFC 215.

Those numbers were matched by Rick Glenn, who was only selected by 18 percent of fantasy players going into his fight against highly touted prospect Gavin Tucker. Glenn punished Tucker over three rounds to notch his second win in the UFC while also pulling off the massive upset.

Sarah Moras also picked up an underdog victory as she submitted Ashlee Evans-Smith with a slick armbar in her first action back in more than two years. Only 21 percent of fantasy players picked Moras going into the night, but she came through with a very impressive outing in front of her home country fans in Canada. 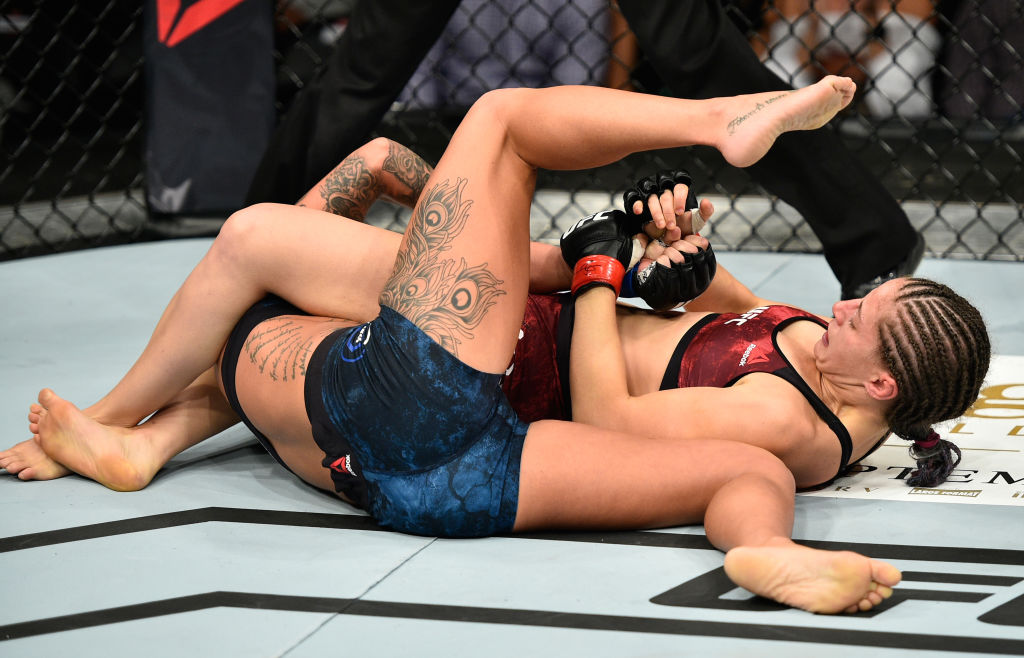 Alex White kept the underdog streak alive as he took out Mitch Clarke by TKO in a lightweight matchup. White was selected by just 37 percent of fantasy players going into the event, but he had no problem playing spoiler while beating Clarke on his home soil.

As it turns out, UFC 215 ended with eight upsets out of 11 fights, according to the final selections made by fantasy players going into Saturday night.