Hunched over after falling to his knees, with his light heavyweight championship once again around his waist, Jon Jones emerged from the darkness into a bright new future.

The message: “The Champ is Here,” just as Jones’s music prophetically proclaimed as he walked to the Octagon for the first time in more than year.

“It got really dark and I spent a lot of time being depressed,” Jones said of his time away from the sport while suspended for numerous violations. “To be back here and to have so much light and the cheers – it was a dream come true. It felt like it was my first title.”

“Here” is the winner’s circle in the main event of UFC 214 after a vicious headkick led to a ground and pound TKO finish against archrival Daniel Cormier, putting an exclamation on the grandest rivalry in MMA history.

These are the UFC 214 Talking Points

Cormier controlled the action in the first two rounds against a rusty Jones. “DC” was landing in the striking exchanges, but Jones remained patient and continued to spray strikes – specifically, his patented low leg kicks.

But just as Cormier seemed to be on his way to avenging the worst loss of his career, the greatness of Jones allowed him to change the course of the fight and finish.

“Daniel Cormier started getting caught up in it being a boxing match and I think he forgot about the takedowns and the kicking and all that,” Jones said. “He was focused on the low kicks and I surprised him with the high kick and landed flush. I smelled blood and I put him away.”

Jones was adamant that he would act much differently toward Cormier at the conclusion of their second fight, after he relentlessly rubbed in his win following the first go around. Once he wrapped his Octagon interview, Jones went over and tried to embrace Cormier, who was still trying to figure out what happened.

“I felt like Daniel really elevated his game,” Jones said. “The two years off and Daniel being active and it’s a testament to the great team he’s a part of. He improved a lot. He came with new weapons and a new level of composure.”

What’s next for Bones

After the fight, Jones made an emphatic call out to former UFC heavyweight champion Brock Lesnar. He told FOX backstage that he feels it’s the right time for a superfight and who better than one of the biggest and most popular heavyweights of all time.

“Brock Lesnar, if you want to feel what it’s like to get your ass kick by a guy who weighs 40 pounds less than you, meet me in the Octagon,” Jones said. He then slammed the microphone and made his exit.

Tyron Woodley dominated his fight against Demian Maia to retain his welterweight title, but the performance didn’t thrill the fans in attendance at Honda Center, who booed throughout and decided to entertain themselves with an old-fashioned crowd wave.

“The Chosen One” stuffed all 21 of Maia’s takedown attempts and landed a couple big shots in the fight. Afterwards he defended his gameplan.

“I’m willing to win fights and when it’s someone that is a freestyle fighter then I’m going to go in there and take their head off,” Woodley said. “When it’s someone that’s a jiu-jitsu master, it would be silly for me to take him down and try to submit him. I was satisfied with my performance; not everyone is going to understand what is taking place in there. It’s a chess match and I won it convincingly.”

Tonya Evinger was a game opponent, but the crisp boxing and explosion of Cris Cyborg allowed the Brazilian to take home the vacant featherweight title.

Years in the making, Cyborg was thrilled to be able to accomplish her dream. 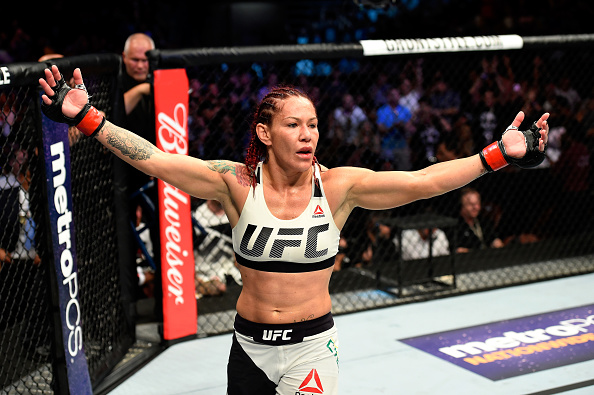 “I don’t have the words to say. I want to thank the fans for coming here and watching me; Cyborg Nation forever,” she said. “A lot of things happened in my career, but before I was just crazy inside the cage and now I’m learning fighting.

“I think this is the perfect time because I think I’m at the top of my career now. I’m really happy. I’m going to make great fights inside this Octagon.”

UFC president Dana White said that former featherweight title challenger Holly Holm has showed interest in fighting Cyborg and that could be the next 145-pound title fight. Holm was in attendance Saturday night in Anaheim, in part to support Jones, her Jackson Wink MMA teammate