Who were the winners at UFC 208: Holm vs. de Randamie? Click below to get the results for all the fights at Barclays Center in Brooklyn, New York City on Saturday, Feb. 11, 2016. 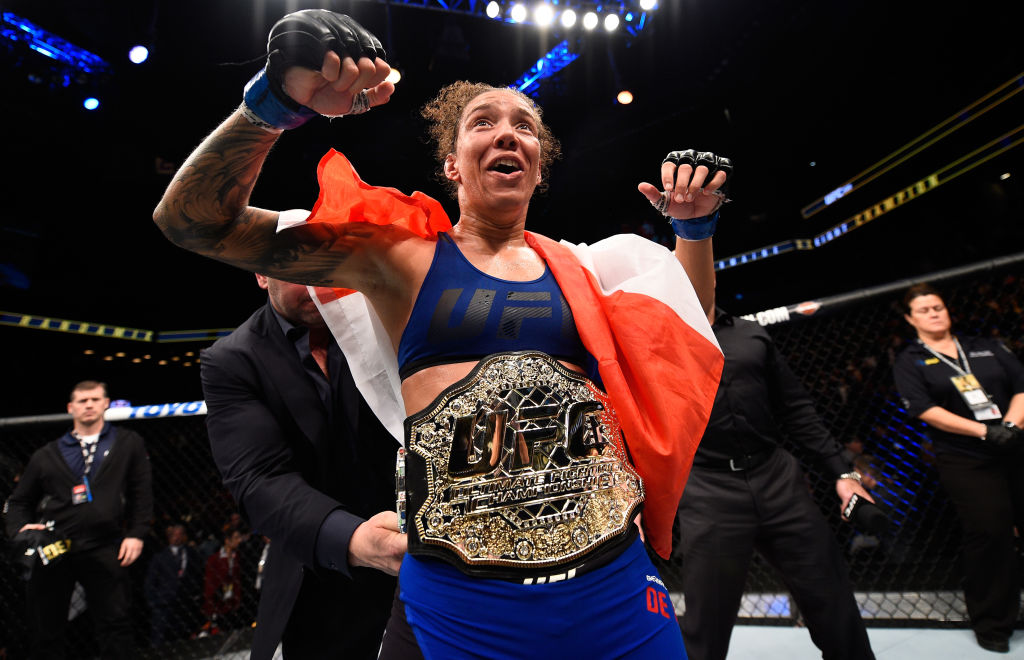 Main event: Holly Holm vs. Germaine de Randamie
Germaine de Randamie landed more and thwarted Holly Holm’s wrestling advances to secure the inaugural UFC women’s featherweight title by unanimous decision, 48-47, 48-47, 48-47. De Randamie landed at a 76 percent clip and out-struck Holm, 144-122 overall and 80-77 in significant strikes. Holm attempted nine takedowns in the fight and wasn’t able to finish a single one. GDR tagged Holm at the end of the second round and it appeared to come after the horn. Holm staggered on her way back to her corner and looked to clinch whenever the chance presented itself after that. De Randamie now stands to face the longtime uncrowned featherweight queen Cris Cyborg, who attended UFC 208 in Brooklyn.

Germaine de Randamie: “It was a close fight. She caught me in the third round. It was a good kick but you won’t knock me out that way and I kept coming. She didn’t want to fight me but I am a warrior and I came here to fight. It was an accident to hit her after the bell, it was never intentional. It was just the heat of the moment. I am not that kind of fighter. Holly is a tremendous champion and I truly respect her but I am a brawler and I love to fight. I want to fight everybody and I will fight anybody so we will see who is next. I want to thank my team and the fans in Brooklyn, who have been amazing to me. Thank you very much.”
Return to top of page 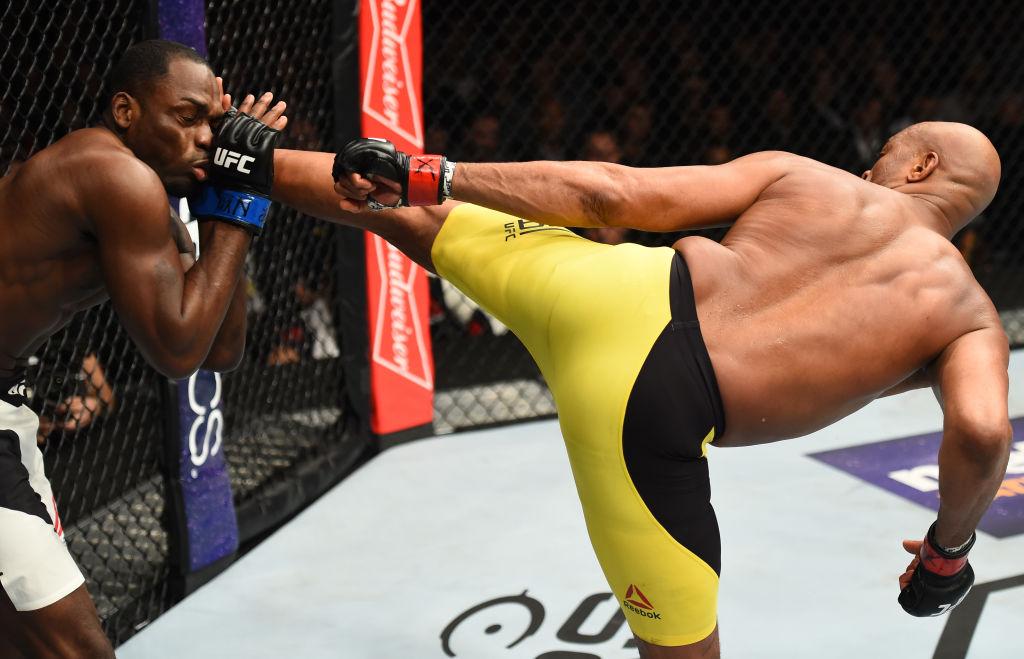 In a stunning unanimous decision announcement, the legendary Anderson Silva defeated Derek Brunson, 29-28, 29-28, 30-27. Silva was out-struck in the fight, 118-54 overall and 54-43 in significant strikes, unofficially. Brunson landed two of 11 takedowns and controlled Silva for 3:52, but was possibly punished for the nine missed chances. Silva showcased phenomenal takedown defense in the third round, using his Muay Thai clinch to land a nice knee to the head on the exit by Brunson. An emotional Silva spoke about how happy he is that he is still able to compete for love of the game just two months shy of his 42nd birthday.

Anderson Silva: “I am so happy. I am so happy because I worked very hard for this fight. I wanted to give my best for my fans and for New York. New York is a very special place to me. It makes me feel like I’m at home. I’m just so happy. I am sorry for being so emotional but it is just because I am happy to be here. Next, I just want to go home and look at what will be the next challenge for me. I am very thankful to New York and to my fans.”

Derek Brunson: “Everyone is telling me that I won. I feel terrible. It’s not Anderson’s fault or the UFC’s fault. I took this fight on short notice and, to have this happen, is just crazy to me. I take this seriously. This is my job. I put everything into this and I got robbed. It sucks.”
Return to top of page 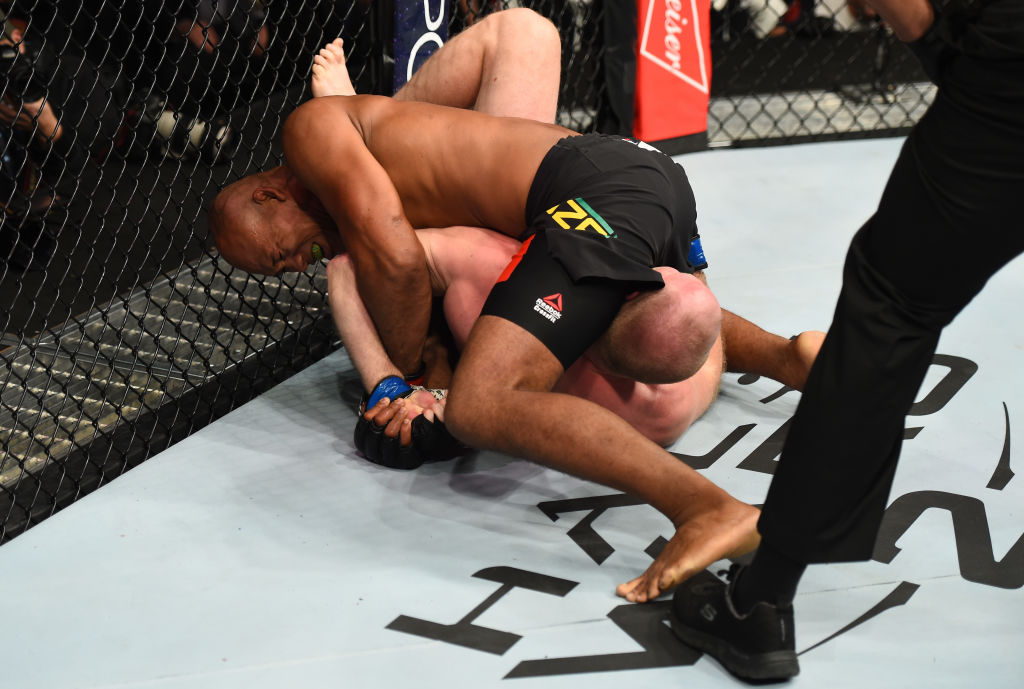 Jacare Souza made quick work of Tim Boetsch, who tried and failed to keep the fight standing early in the first round. Jacare mounted Boetsch after a textbook double leg takedown and started to land some punches. When Boetsch looked to scramble, and wiggle out, Jacare grabbed ahold of his arm and cranked it with a kimura lock to earn the submission win at 3:41 of the first round. Jacare improves to 7-1 in the UFC and puts himself directly in the middle of the title picture at 185 pounds.

Jacare Souza: “My plan was to come out strong and finish him early. I am the best in the world and I wanted to make a statement. Of course, I am the most deserving of the title shot in my opinion but I will wait now. I have nothing left to say about Romero or Bisping other than I will be waiting for the winner and I will be champion.”
Return to top of page 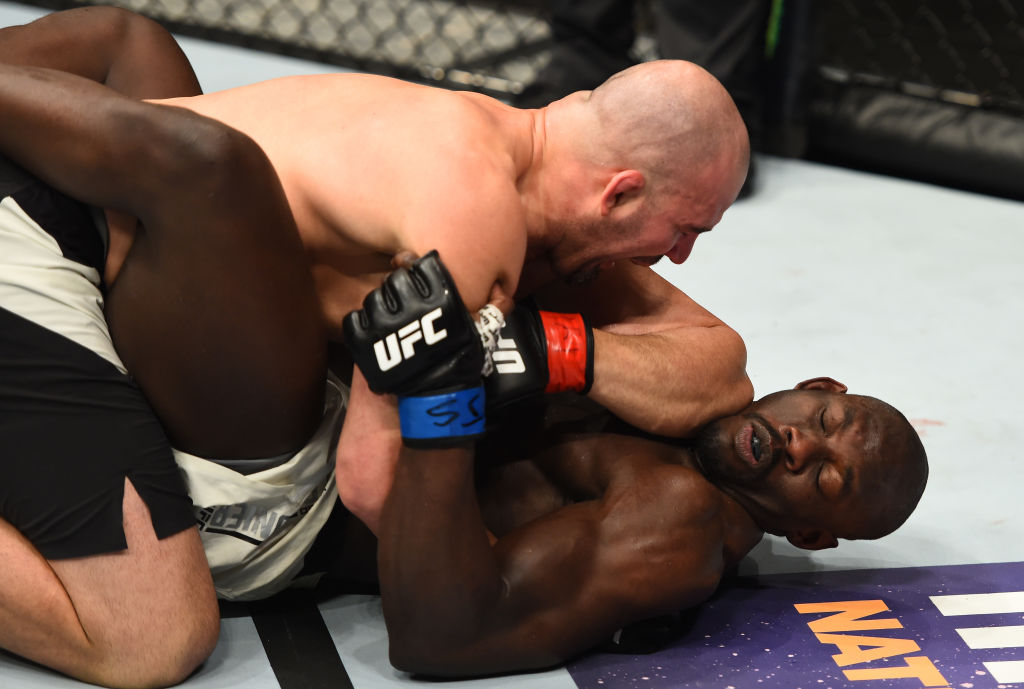 Glover Teixeira: “I was a little surprised by the way he moved. He had a fast jab but the plan was to take him down and beat him on the ground. I am ready to go when the UFC has another opponent in mind, maybe a Top 5 or Top 10 contender next time. However, the main thing is to be ready and see what comes my way. You never hope for injuries but, in this game, it is important to always stay ready. So, if a title opportunity presents itself, I will be ready! I am here to fight the top athletes in the world.”
Return to top of page

Dustin Poirier and Jim Miller had 13 performance bonuses between them before they collided at UFC 208. And they showed off why in this one, engaging in furious exchanges and emptying the gas tanks over the course of 15 minutes. Poirier took a majority decision (28-28, 30-27, 29-28) after outclassing Miller on the feet and in the grappling exchanges. Poirier landed a staggering 93 sinificant strikes and out-struck Miller, 112-92 overall. Poirier landed three takedowns to just one for Miller and showed his depth as a striker throughout the fight. Poirier was landing big shots and using his head movement to set up his counters. In the third, when Miller started to gain some momentum with a few brutal leg kicks, Poirier pulled a veteran move using a straight left hand to disguise a takedown when he caught a Miller leg kick to finish off the fight. Poirier improves to 5-1 since moving up to lightweight. 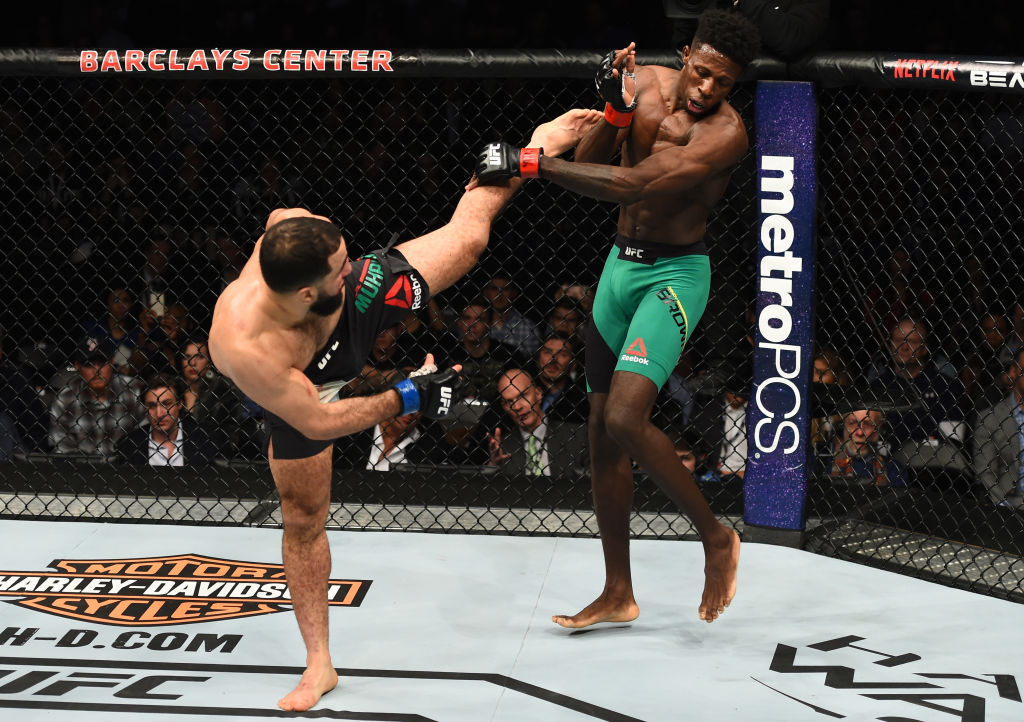 Belal Muhammad’s two takedowns were the difference in his fight against Randy Brown. Muhammad landed 146-61 in total strikes and won a unanimous decision (30-27, 30-27, 29-28). Muhammad rebounds from a disappointing KO loss against Vicente Luque and improves to 2-1 in the UFC.

Belal Muhammad: “Nothing surprising out there tonight other than I felt I should’ve performed better. Randy brought what I expected him to but I just didn’t execute at the level I wanted to. I’ve fought a lot over the past 12 months so I want to work on some of the things I wasn’t happy with tonight and get back out there with tough competition to show what I’ve got.”
Return to top of page 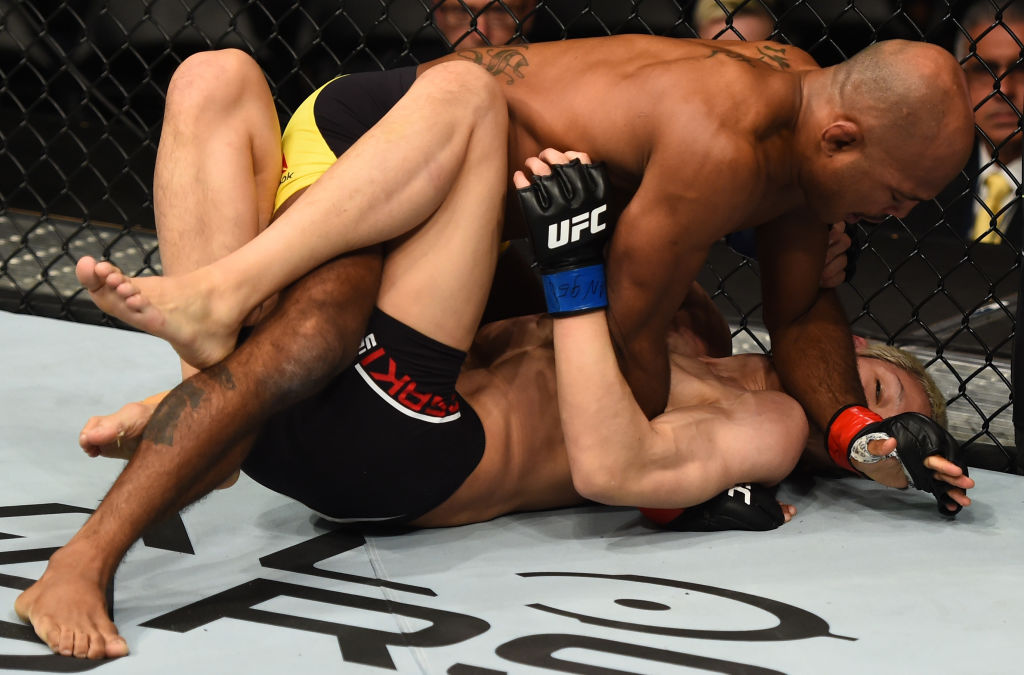 Wilson Reis knew exactly were his advantage was against Ulka Sasaki and he exploited it to pick up a convincing victory. Reis landed six of nine takedowns and controlled Sasaki for 8:42 to cruise to the 29-28, 29-28, 29-28 unanimous decision win.

Wilson Reis: “This was a good fight so I hope everyone was entertained. I am very happy to leave with the win but I would’ve preferred to get that first round finish instead of a decision. Sasaki had an interesting style and he was changing stances so it took me a bit to figure that out. I am a bit disappointed that I didn’t finish him but happy with the win. Now I am back to looking for Demetrious Johnson. I am ranked 5th in the world and I feel like I am the only challenger that makes sense. If I don’t get that fight then I want Joe Benavidez as a title eliminator.”
Return to top of page 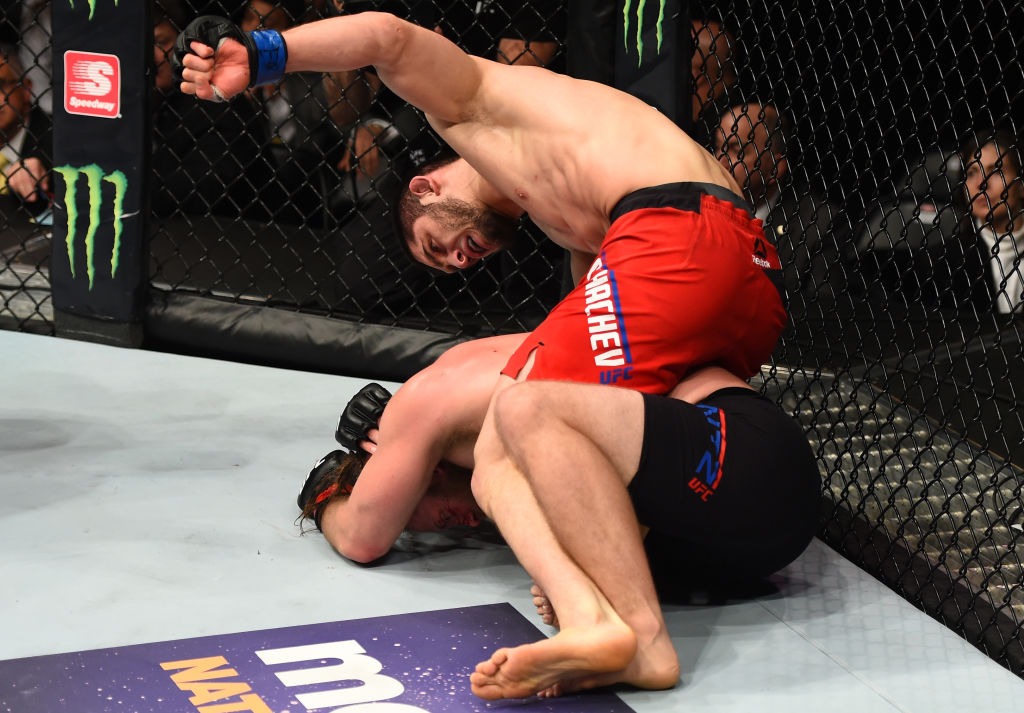 From the start of this lightweight scrap until the final horn, Islam Makhachev dominated Nik Lentz to pick up the unanimous decision win, 30-25, 30-25, 30-27. Makhachev landed 91 percent of his strikes thrown and controlled Lentz on the mat with four takedowns leading to 11:40 of control. Makhachev improves to 3-1 in the UFC and 14-1 overall, and has now won two in a row.

Islam Makhachev: “There is nothing that surprised me about this fight. I wanted to get the finish but he was a tough competitor. I think age is a big factor and I am happy to control the fight. I proved my dominance tonight and I want big fights next.”
Return to top of page 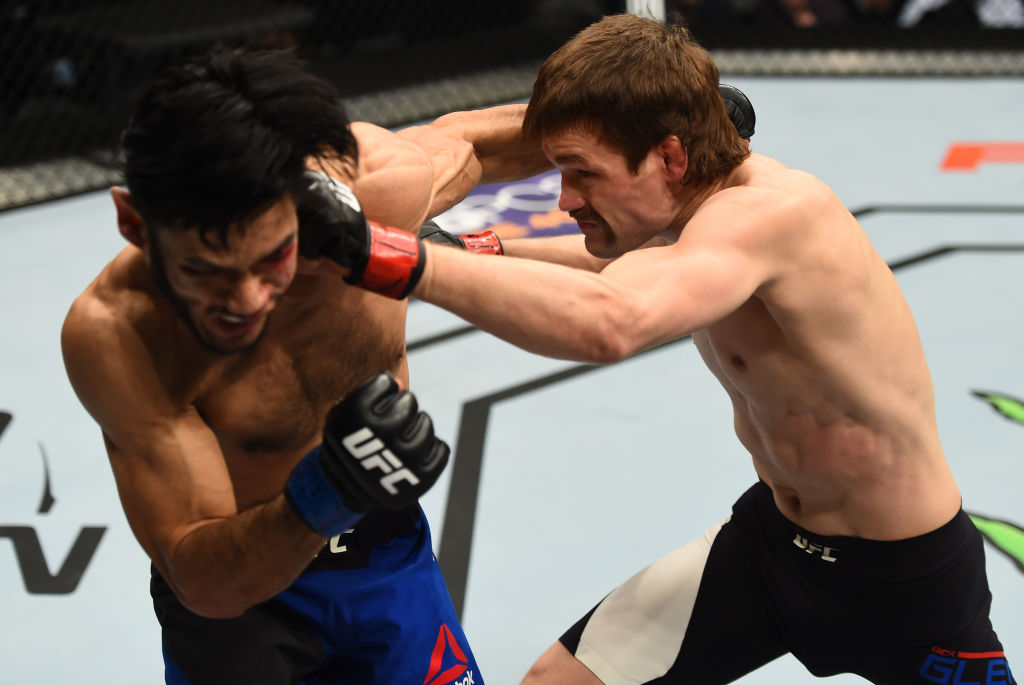 Rick Glenn won a split decision (27-30, 29-28, 29-28) against Phillipe Nover in a tough fight to score. Nover won 30-27 on one judge’s scorecard and lost on the other two. He out-struck Glenn, 113-67, but it was Glenn who landed the more significant strikes. Nover stuffed all six of Glenn’s takedown attempts in the fight. Glenn picks up his first UFC win and hands Nover his third loss in a row.

Rick Glenn: “It’s a little overwhelming to be here in Brooklyn. It took a long time for the UFC to come here and it’s incredible to be on this card. I think I did enough to win all the rounds tonight. It was a close fight but I feel like it should’ve been unanimous. I didn’t want to let it go to decision with him being a hometown guy so I feel like I could’ve done more out there to get the finish but I’m happy to leave with a win. I was really surprised in his defense against the cage. I wasn’t able to get him down the way I wanted to. He just popped right back up and I didn’t expect that. I want to get back in the gym and work on some things, then find another mid-level guy to fight. I want to get a finish in my next one and then I’m looking for someone in the Top 10.”
Return to top of page 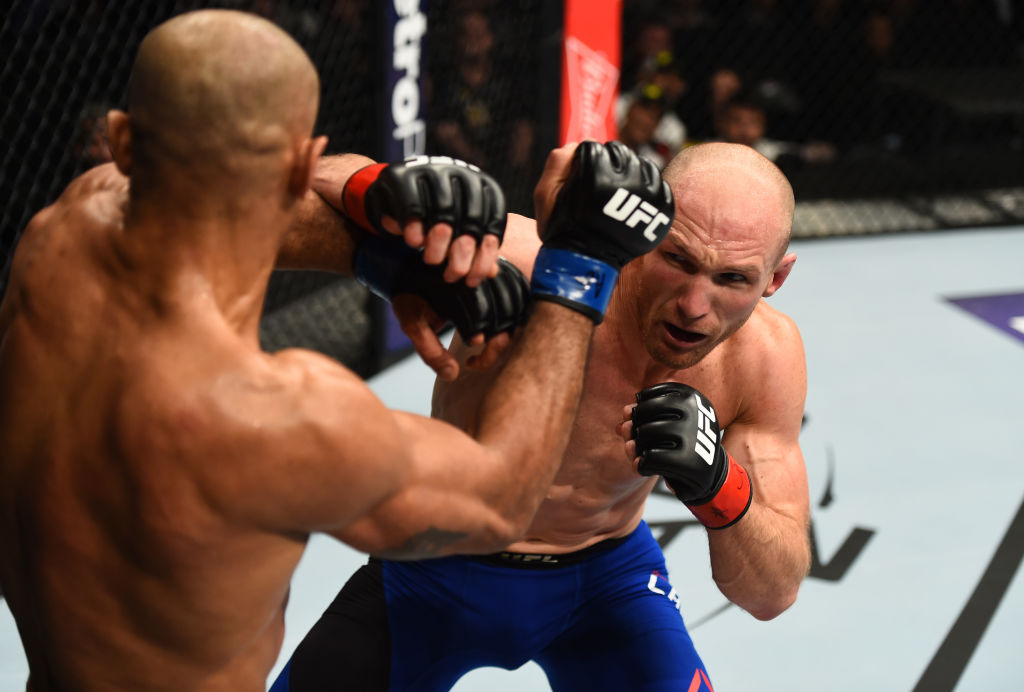 Ryan LaFlare returned after 14 months away from the Octagon dealing with a host of injuries and took out Roan Carneiro in dominant fashion in his home state of New York. LaFlare landed a takedown in the fight and controlled most of the fight with his slick striking against the elite floor technician Carneiro. LaFlare scored a knockdown in the second round, his most dominant round of the fight, and out-struck Carneiro 29-2 in the frame. The three judges scored the unanimous decision win for LaFlare, 30-26, 30-27, 29-28.

Ryan LaFlare: “It is an honor to be the first fight in Brooklyn and, to get the win, I feel incredible. I was surprised with how hesitant he was but that allowed me to control the pace and do what I needed to do. I’m ready to get back out there and fight again soon.”
Return to top of page