Amanda Nunes didn’t mind the lack of interviews and media attention she received in the leadup to her colossal showdown against women’s MMA icon Ronda Rousey. After all, English is the Brazilian’s second language and she’s a bit shy in front of the cameras.

But when “The Lioness” began to roar inside the Octagon at UFC 207 – finishing Rousey in under a minute by standing TKO – the ferocious onslaught she brought spoke louder than any soundbite.

Nunes established herself as arguably the scariest woman on the planet, notching her second-straight first-round finish.

Miesha Tate lost her will to fight after a devastating loss to Nunes at UFC 200. Now the future of Rousey is uncertain, but Nunes suggested that it should be the end for “Rowdy” as well.

“I talked to (Rousey) and said, ‘You did a lot for the sport. Thank you so much. But now you can take time, rest and then maybe do something else,’” Nunes said. “No need to keep doing that. For what? She’s a millionaire already. Why does she want to keep doing that and keep hurting herself?

“I’m going to be the champion forever so she has to retire.”

UFC president Dana White said it best in the leadup to the fight. The promotion may have been centered around Rousey. But after a win over the legend, everybody would know Nunes.

These are the UFC 207 Talking Points 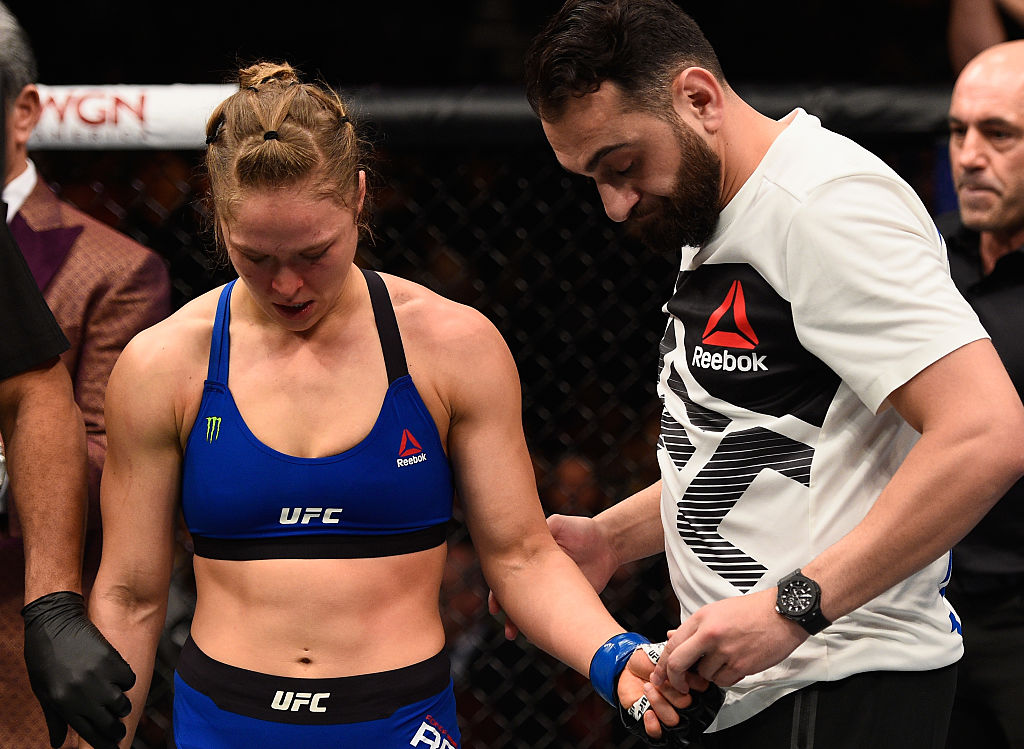 After the shock wore off and fans finished wiping tears from their eyes as they departed T-Mobile Arena, the questions began to pour in about Rousey’s future.

Will she retire after a second straight loss?

Rousey is one of the most competitive fighters the sport of MMA has ever seen. When she stepped away from the game after her loss to Holly Holm over a year ago, she said she had to grieve the undefeated champion that she was no longer.

With another loss, one stricken with images of a staggering Rousey, face covered with imprints of Nunes’ gloves, the future is cloudier than ever before.

But whether Rousey chooses to fight on, her legacy is intact and will live on, regardless.

Cody Garbrandt cracked Dominick Cruz in the head with a high kick in the third round, opening a cut over the champion’s left eye.

“We were talking back and forth whenever we hit each other,” Garbrandt said. “I remember in the third round when he had blood spewing down his face. I said, ‘You having fun yet?’ And he didn’t answer me. I knew the fight was mine right there.”

But Garbrandt’s entire 25-minte body of work was flawless. Cruz is known for his ability to make opponents miss, but it was the Team Alpha Male standout who eluded the most strikes.

Cruz landed only 31 percent of his total strikes (95/298), a number that is usually reserved for his adversaries. Garbrandt was economical with his punches and kicks, landing at a 35-percent clip, five points higher than the UFC average vs. Cruz.

What’s next? Dillashaw wants his belt back

It was an ominous fight week with TJ Dillashaw, Cruz and Garbrandt all on the same fight card.

Backstage at weigh-ins on Thursday, Garbrandt and teammates Urijah Faber and Justin Buckholtz stood just a few feet behind Dillashaw as they waited to make their walk to the stage. No words were exchanged.

The bad blood between Dillashaw and Team Alpha Male is still boiling more than a year after he left the camp to train with longtime coach Duane Ludwig in Colorado.

The stage is set now for the score to be settled after Dillashaw’s win over John Lineker and Garbrandt’s championship victory. White said that Dillashaw is the likely next challenger.