CONOR MCGREGOR VS EDDIE ALVAREZ
As the UFC 205 main event, this fight is the most intriguing of 13 intriguing fights, but then again, that could be said for any fight where ½ of the equation is Mr. Conor McGregor. And though the focus is on McGregor making the move to 155 pounds and attempting to make history as the first fighter to hold two UFC titles simultaneously, the real magnifying glass should on champion Eddie Alvarez, and particularly what he does in the first five minutes. Philly tough to his core, Alvarez will likely catch some leather early on, and McGregor has the firepower to bust him up and get him out of these in the opening round. But what happens in round two, or three or four or five? What happens if Alvarez makes it a grinding wrestling match down the stretch? So many questions, so much anticipation, and such a great fight to cap off the UFC’s first night in Madison Square Garden.

STEPHEN THOMPSON VS TYRON WOODLEY
I will still say that the hardest punch I’ve ever seen landed was the one UFC welterweight champion Tyron Woodley landed on Carlos Condit. How Condit survived that blow, I’ll never know, but it’s the type of punch Woodley can land and take out 99 percent of welterweights with. He did it to Robbie Lawler to win the title, and he can most certainly pull it off against challenger Stephen “Wonderboy” Thompson this weekend. But does Woodley want to get in a kickboxing match with one of the most decorated kickboxers to ever grace the Octagon? Why would he? Choosing to strike with Thompson might be the most attractive option when it comes to potentially providing a highlight reel finish and getting a bonus check, but if Woodley goes back to his wrestling game and punishes Thompson for five rounds, that puts the odds higher in his favor to retain his title.

It will be quiet on the streets of Little Poland in Greenpoint, Brooklyn on Saturday night when Joanna Jedrzejczyk and Karolina Kowalkiewicz meet up for the UFC women’s strawweight title, as the Polish stars have captured the imagination of their people both at home and abroad. This is a big deal, two fighters with a local – and thus far, friendly – rivalry, fighting for a world championship, and you can bet that many young men and women will see this bout and then head to a gym on Monday to begin training. So who wins? It’s hard to pick against Jedrzejczyk when she faces any strawweight, especially after her come from behind win over Claudia Gadelha in July, and with Kowalkiewicz being a good style matchup, it might be the perfect introduction to the NYC crowd for Joanna Champion. But given that the stakes have never been higher and the pressure mostly sitting on JJ’s shoulders, Kowalkiewicz may be able to swoop in and make things interesting when the Octagon gate closes.

YOEL ROMERO VS CHRIS WEIDMAN
Everybody wants to know about Chris Weidman and New York, and rightfully so, as the Long Islander played a pivotal role in getting MMA sanctioned in his home state earlier this year. But what about Yoel Romero, the guy Weidman is fighting on November 12? The Olympic Silver medalist from Cuba has been nearly forgotten in the lead-up to the fight, but he has the power to spoil this homecoming with one swing, and luckily, “The All-American” knows it. So despite all the media obligations, Weidman has been putting in the hours in the gym and he expects to be more than ready for the real reason he’s heading into Midtown on Saturday night.

RAQUEL PENNINGTON VS MIESHA TATE
Before Raquel Pennington and Miesha Tate even step into the Octagon on Saturday, you have to tip your cap to these two ladies, who have probably fought the highest level of competition of anyone in WMMA. That means this one is likely going to be a grueling three-round war, because neither fighter knows how to give ground to an opponent. Sure, they’ve had their losses, but they’ve only come against the best in the business, making this a solid opener to the Pay-Per-View main card.
More on UFC 205: Fight card for Nov. 12 | Reasons to watch  | Champions Alvarez, McGregor to headline historic card | Woodley-Wonderboy welterweight title clash set | Polish stars Jedrzejczyk, Kowalkiewicz perfect for NYC | Preview the main card, and the prelims | By the Numbers: UFC 205 has big non-title fights too | Limited seats available

JEREMY STEPHENS VS FRANKIE EDGAR
I’ve said this to both Frankie Edgar and Jeremy Stephens, and though it may be blasphemy to some, I’ll stand by it when I say that this one could wind up being a Gatti-Ward type fight for MMA. Think about it – two old school, hard-nosed fighters who always show to do just that – fight. It may not be pretty in a conventional sense, but I think after 15 minutes of action, we’ll call it a beautiful masterpiece.

MICHAEL JOHNSON VS KHABIB NURMAGOMEDOV
Despite his background on the mat, Michael Johnson told me he’s not getting into a wrestling match with Khabib Nurmagomedov. Good call, and a smart one, because if “The 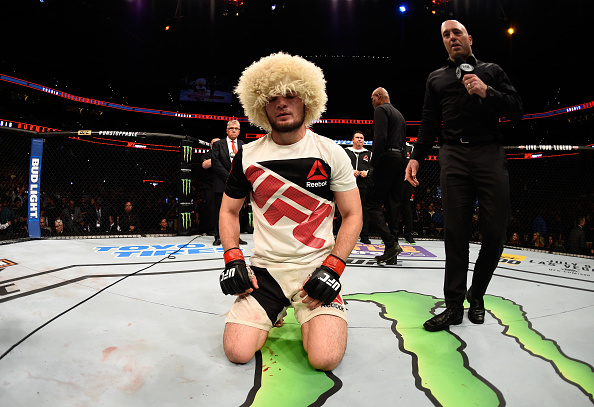 Menace” can keep his unbeaten foe at bay and stick and move his way out of trouble, it will be another statement-making victory for a young man who will have gone from back-to-back losses to Beniel Dariush and Nate Diaz to the doorstep of a world title shot.

BELAL MUHAMMAD VS VICENTE LUQUE
Chicago’s Belal Muhammad has quickly become a must-see in the Octagon, and the fact that this is his third fight in the UFC since July (and fourth overall for 2016) just adds to his appeal. And then there’s Vicente Luque, who has also emerged as one of the welterweight division’s top prospects as well thanks to three consecutive wins – and finishes. This will be an exciting fight, but more importantly, a star will likely emerge from the bout.

THIAGO ALVES VS JIM MILLER
In July, Jim Miller was contemplating retirement. Now he’s got a two-fight winning streak and could crash the lightweight top 15 again if he can defeat Thiago Alves. Brazil’s “Pitbull” never thought about walking away after a series of injuries, but now he’s entering a new division against one of that division’s most aggressive competitors. Miller will find out quick is Alves is ready for 155 pounds.

TIM BOETSCH VS RAFAEL NATAL
With his back against the wall earlier this year, Tim Boetsch delivered, snapping a three-fight losing skid with a stoppage of Josh Samman. In that fight, “The Barbarian” realized that living up to his nickname in the Octagon may be the best course of action from here on out. And he can repeat that kind of performance against Rafael Natal, but he’ll also have to look out for the kind of slick jiu-jitsu “Sapo” can deliver after the slightest of mistakes from an opponent.

KATLYN CHOOKAGIAN VS LIZ CARMOUCHE
New Jersey’s Katlyn Chookagian impressed in her UFC debut, decisioning Lauren Murphy with a striking attack that had all the hallmarks of her coach Mark Henry in it. If she can maintain that attack against former world title challenger Liz Carmouche, she may just end up in the top 10 next week. But Carmouche is no easy out for anyone, and her swarming style will be a tough one for the local favorite to deal with for 15 minutes.