Two of the most accomplished fighters in MMA history stepped into the Octagon at UFC 204, and they delivered a Fight of the Night clash that few at Manchester Arena, or watching worldwide, will ever forget.

Michael Bisping defeated Dan Henderson by unanimous decision to retain the middleweight championship of the world.

But it took a herculean effort to achieve that feat.

Henderson, a combat sports legend who won various titles in other top-level MMA organizations, landed his patented “H-bomb” and had Bisping in trouble at the end of the first and second rounds. Particularly in the first round, it appeared it would be the American would be the one leaving Manchester Arena with the title belt.

“The first time I knocked him down the first fight flashed in my head,” Henderson said of the first round knockdown, flashing back to their first matchup at UFC 100 when he defeated Bisping. “He wasn’t quite finished enough, and I didn’t get there soon enough.”

But as he has done throughout his career, Bisping scratched and clawed his way back into the fight. He rebounded from the first round knockdown to control the second round until the “H-bomb” repeat, and ultimately out-striking his rival to win the fight on the scorecards (48-47, 48-47, 49-46). The victory elevates the 37-year-old to No. 1 on the all-time UFC victory list.

“Now I look forward to the next one,” Bisping said in the Octagon after the fight. “I’ve still got the belt, I’m still the champion and I’m very happy. It was close but it’s never easy. If it was easy, everybody would do it.”

Here are the rest of the UFC 204 Talking Points

Gegard Mousasi waited many years to get a fight against the man he described as a “legend” earlier in the week, Vitor Belfort. 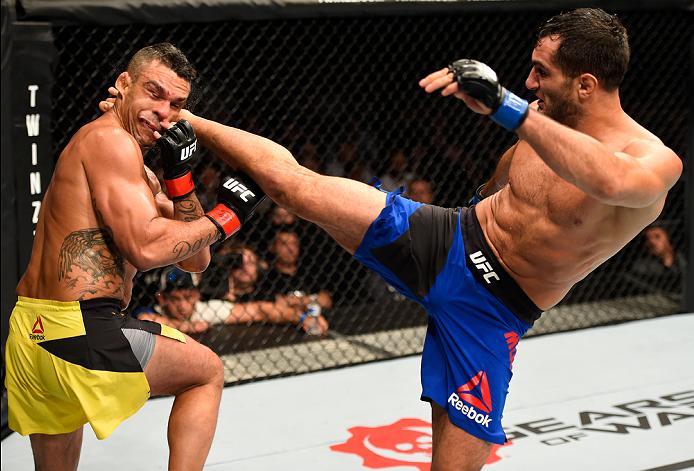 He got it. And he made the most of his opportunity, winning by TKO in the second round.

“That’s what the fans want to see,” Mousasi said. “I think I was flawless in the fight - a flawless victory, baby!"

So what’s next? He wants to keep climbing the middleweight ladder.

“I feel good, ready for the next one,” Mousasi said. “I think I’m No. 5 in the division now. Robert Whittaker and Derek Brunson are in front of me but I don’t think I need to prove that I’m a better fighter than them. I’m way more technical than them.”

Stefan Struve is a heavyweight from Holland, Jimi Manuwa is a light heavyweight fighting out of London - very different fighters, but both made the same statement at UFC 204.

These veterans have had up-and-down results in recent Octagon visits, with Struve at 3-3 in last six bouts and Manuwa 2-2 in his last four. Yet the pair put on dominating performances to get their careers back on track.

Struve defied his height and moved quickly to get in position for a D’arce choke win over Daniel Omielanczuk, his first submission victory since 2012. Manuwa used quick hands and power to take down Ovince Saint Preux in a vicious manner for a KO win.

Expect the two fighters ranked in the Top 15 in their respective divisions to move up and get even bigger bouts next.

Patience pays off for Bektic

Mirsad Bektic waited 497 days to return to the Octagon, then waited as he faced three fighter changes due to injury, and finally waited to get in the perfect position against Russell Doane at UFC 204.

But all that waiting was worth it as he improved his record to 11-0 and reminded folks he’s one to be reckoned with.

The No. 15 ranked featherweight marked his return from an ACL injury with a dominating showing against Doane, who stepped in on short notice earlier this week. Bektic took Doane down, worked patiently to get in position, and then clinched the victory with a rear naked choke submission for his fifth career first round win.

“This moment feels so natural,” Bektic said. “We’ve had so many opponent changes but I just stayed focused on myself and what was going to happen. ... I'll take that moment with me when I die.”

“I’ve been a prospect for a long time but I’m not a prospect any more; I’m a contender and that’s that."

With seven fighters boasting UK connections on the card, it was going to take quite the performance to stand out.

Hailing from UK MMA promotion BAMMA, Diakiese was well-known for his power and he showed it off in his TKO win over Lukasz Sajewski.

The lightweight struggled in the clinch against Sajewski, but once he was able to break apart or stand up, he landed vicious shots until he finished the encounter late in the second round and improved to 10-0 as a professional.

“Every time I go out there, I’m looking (to make) an impression,” Diakiese said. “That’s what we are here for.”