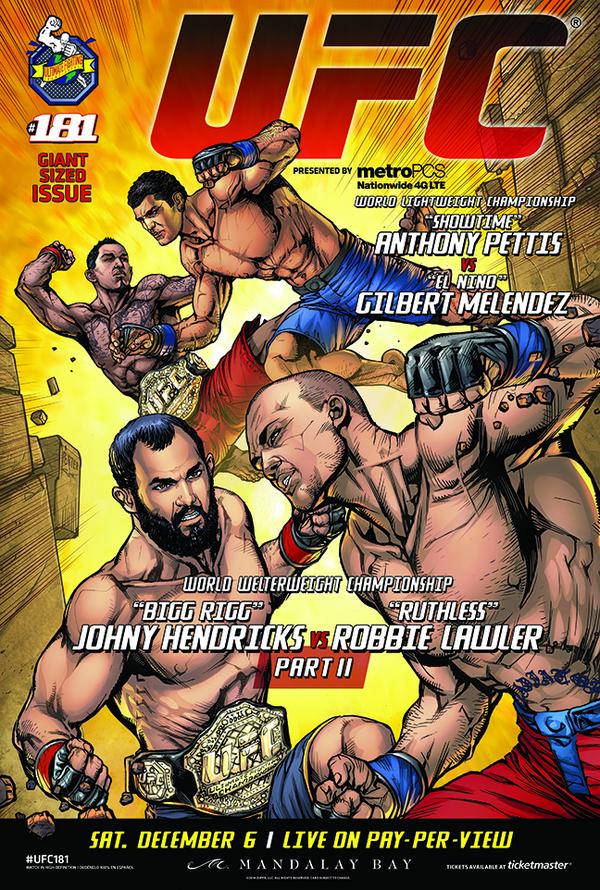 Coming off a stretch where the UFC rolled out 10 events over eight weeks, capped by Rory MacDonald’s blistering third-round finish of Tarec Saffiedine last Saturday night in Halifax, the current two-week break is a chance to do two things:

(1)    Reflect on some of the outstanding fights that have taken place already this year, and
(2)    Look ahead to the collection of terrific matchups that still remain on the schedule.

While we’re inclined to save our thoughts on the best action of 2014 until the year has come to a close, looking at the upcoming schedule and sharing our thoughts on the most intriguing and exciting contests to hit the Octagon as the autumn colors come out and the New Year draws nearer is something entirely different.

We’re fight fans too and just like everyone else, there are a bunch of fights from the final nine events the year that have us eagerly awaiting their arrival.

Here’s our chronological look at the top fights left on the 2014 fight calendar.

This rematch has all the makings of something special – a true grudge match between a dominant champion and a challenger whose only career loss came in their first encounter in 2012.

Mendes appeared on his way to claiming the first round of that bout until Aldo stopped a takedown by hanging onto the cage, spun free and brought the fight to a close with a precise and vicious knee that dropped the Team Alpha Male member.

The champion has looked sharp in successfully defending the featherweight title thrice since that first meeting, while Mendes has taken his game to the next level, showing improved power to compliment his wrestling in winning five consecutive contests heading into this one.

Once again taking place on Aldo’s home turf, Mendes will be looking to bring the Brazilian’s reign to an end, while the champion has designs on a seventh straight championship defense and another celebration amongst the fans Rio.

These two have been circling each other since before Rockhold made the transition to the UFC following a championship run under the Strikeforce banner, and after months of back-and-forth banter, they’re finally sharing the Octagon in early November.

Rockhold has looked outstanding in his last two appearances, earning first-round stoppage wins over Costas Philippou and Tim Boetsch, while “The Count” is coming off arguably the most dominant performance of his career – a 16-minute thrashing of Cung Le at the end of August.

As soon as that bout was completed, this one was put together and as soon as it became official, fight fans everywhere circled November 8 on the calendar because the simmering bad blood and animosity between these two is bound to boil over once they hit the Octagon in Sydney.

This main card contest on the second half of the November 8 doubleheader carries significant championship ramifications, but even without the potential of producing the next flyweight title challenger, the contrasting styles of these two elite 125-pound competitors is enough to make it a must see matchup.

“Uncle Creepy” turned in his most complete performance to date last time out, picking apart veteran Brad Pickett to pick up his second consecutive victory after failing to register a victory in each of his first three UFC appearances. Showing the quickness and clean striking that made him the top flyweight in the world prior to his arrival in the Octgaon, McCall seems to have put the distractions that limited him in the past behind him and set his sights on a third meeting with flyweight champ Demetrious Johnson.

Lineker enters off a late third-round stoppage win over Alptekin Ozkilic, but it’s the fact that he’s successfully made weight on consecutive occasions that might be more important, as the hard-hitting 24-year-old Brazilian has always been viewed as legitimate threat with blistering power. Now that he appears to have figure out how to hit the 125-pound limit consistently, “Hands of Stone” could be poised to challenge for the title.

After establishing himself as one of the top prospects in the organization with his upset win over Uriah Hall to win the middleweight competition on Season 17 of The Ultimate Fighter, Gastelum dropped to welterweight and posted a trio of victories to land at No. 11 in the divisional rankings.

Now he gets a chance to make a push for a place in the Top 5 by taking on the perennial contender Ellenberger in the co-main event of the UFC’s debut fight card in Mexico.

While “The Juggernaut” enters on a two-fight losing streak, the 29-year-old veteran has been a Top 10 fixture since arriving in the UFC five years ago and stands as the biggest test to date for the talented young fighter from Yuma, Arizona. If the Nebraska transplant can revert back to the form that saw him win eight of nine following his debut split decision loss to Carlos Condit, he should pair with the recent TUF winner to produce another electric contest in the 170-pound weight class.

By the time Velasquez hits the Octagon to defend the UFC heavyweight title against Werdum, it will have been 13 months since he cemented his standing atop the division by doling out a second round of punishment to former champ Junior dos Santos at UFC 166.

With everything that has transpired since then, it’s easy to forget how impressive Velasquez was on that night, but the memories should come rushing back once the American Kickboxing Academy product lands his first big right hand or drives through a double leg.

But Velasquez is facing a challenger that is in the best form of his career and has a history of bucking the odds and rewarding those that rolled the dice on the underdog. From his submission win over Fedor Emelianenko to his playful five-round win over Travis Browne in April to cement his shot at the belt, Werdum has consistently risen to the occasion and proven his doubters wrong.

If he can do it again next month in Mexico City, he’ll be the new UFC heavyweight champion.

With Conor McGregor having made his case for a title shot with his tour de force showing at UFC 178 and Aldo and Mendes ready to battle for the belt later this month, Edgar and Swanson will collide in Austin, Texas, looking to keep “The Notorious” from cutting in line while earning a championship opportunity for themselves in this one.

“The Answer” completely outworked and overwhelmed B.J. Penn in their trilogy bout earlier this year, pushing his winning streak to two and cementing himself as one of the elite contenders in the featherweight division.

Swanson, meanwhile, has been biding his time and piling up wins since losing his UFC debut to Ricardo Lamas a little less than three years ago. “Killer Cub” has racked up six consecutive victories in that span, including four straight against fighters ranked in the Top 15. If he can add Edgar to his running total, the Palms Springs native might have too good a case for contention to overlook.

Either way, this one should be an electric back-and-forth between two supremely talented fighters in what is fast becoming one of the most competitive and entertaining divisions in the UFC.

The wait to see Pettis defend the lightweight title he won from Benson Henderson is just about over, as his showdown with Melendez is officially less than two months away.

“Showtime” might be the most exciting fighter in the sport today – an inventive striker with tremendous finishing instincts and a flare for the dramatic. While injuries and inactivity have limited him to just four appearances over the last three years, the 27-year-old is a perfect 4-0 in those outings, with the last three all ending in the first round.

If Pettis is glitz and shine, Melendez is his counter-balance - a hard-nosed grinder with good hands, strong wrestling and heart for days.

You won’t see “El Nino” running up the cage wall to deliver any kicks, but the former Strikeforce lightweight champion will battle tooth and nail from bell-to-bell, and after coming out on the wrong side of a split decision in his first attempt to capture UFC gold, you can be sure the man from the Bay Area will do everything in his power to make sure this fight doesn’t go to the judges and unquestionably falls in his favor if it does.

Already the frontrunner for Fight of the Year, the sequel is set to hit the cage before the year is out, moving up to replace Chris Weidman and Vitor Belfort atop the UFC 181 fight card in early December.

In addition to being a continuation of one of the best fights of the year, what makes this second showdown between Hendricks and Lawler so compelling is what each has done since their first encounter.

After claiming the victory and the vacant welterweight title in March, Hendricks revealed he’d fought with a torn biceps muscle. He’s since had surgery to repair the injury, and given how well he performed the first time around, how much better is he going to be now that he’s 100 percent?

All Lawler has done since coming up just short in his quest to become welterweight champion is post consecutive victories over Jake Ellenberger and Matt Brown two months apart. Many believe “Ruthless” did more damage in the first meeting between these two and with that experience under his belt, it will be interesting to see what adjustments the 13-year veteran makes the second time around.

We still don’t know which two competitors will be battling for a place in the history books as the inaugural women’s strawweight champion, but given how competitive and entertaining the first few fights from the current season of The Ultimate Fighter have been, we’re already counting down the days until the final two remaining fighters step into the Octagon with the title on the line.

On one side of the cage is Dos Santos, the former heavyweight champion, competing for the first time since his second loss to current titleholder Cain Velasquez. “Cigano” packs thunder in his hands and is unquestionably one of the top heavyweights in the sport today, but after more than a year on the sidelines battling injuries and coming off a his UFC 166, many people are curious to see how the Brazilian responds once he returns to the cage.

On the other side is Miocic, one of the few fresh names in the big boy ranks and a fighter that sought out this pairing with the former champion after their initial meeting was postponed in May. Riding a three-fight winning streak and bringing a well-rounded skill set to the table, the Ohio native could potentially earn himself a shot at the title with a victory over the former champion.

Plus, who doesn’t like watching to heavyweights with knockout power collide in the center of the cage?