What many believed was going to be the sleeper Fight of the Night on the UFC 200 card Saturday at T-Mobile Arena instead turned out to be a devastating knockout win for Joe Lauzon, who finished fellow lightweight action hero Diego Sanchez in less than a round.

Lauzon’s striking was sharp, crushing Sanchez twice with left hands in the early going. The gutsy Sanchez tried to recover, but Lauzon picked his shots and continued to hurt him as he pursued the Albuquerque native around the Octagon. Finally, another barrage of punches was enough for referee Mark Smith, who stopped the contest at the 1:26 mark.

Lauzon moves to 26-12; Sanchez, who was stopped for the first time in his career by strikes (a TKO loss to BJ Penn was due to a cut) falls to 28-9. 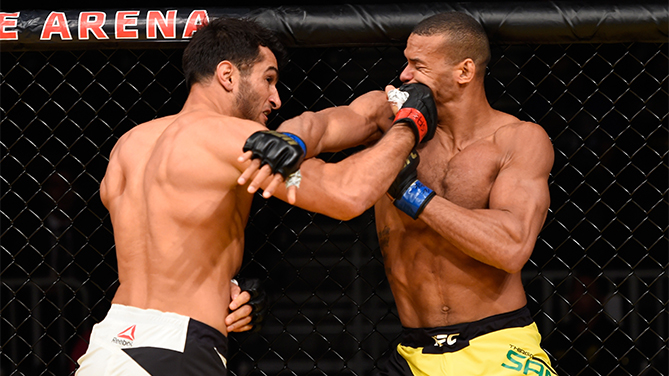 Mousasi was a master of controlling the distance in the first half of the opening round, as he fired in strikes and was out of range before Santos had a chance to counter. Then, midway through, he flurried and hurt Santos, using the Brazilian’s retreat to take the fight to the mat. While there, Santos appeared to clear his head, but as he rose to his feet, Mousasi clipped him with a punch and sent him crashing back to the canvas. This time, Santos would not escape, with a follow-up shot bringing in referee Marc Goddard to stop the bout at 4:32 of round one. 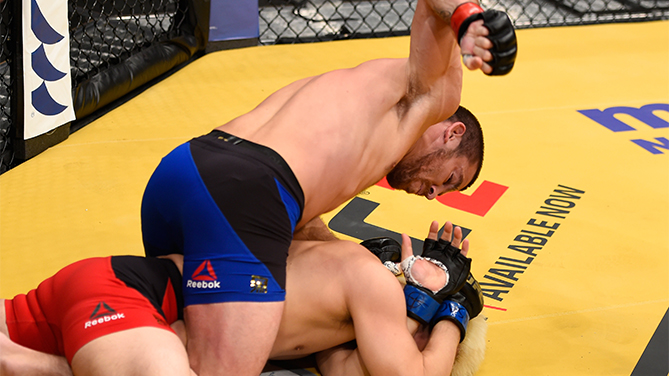 In a crossroads bout between two lightweight veterans, Jim Miller opened up the UFC 200 card with an impressive first-round stoppage of Takanori Gomi, snapping a two-fight losing streak.

Miller’s opportunity to get the fight to the mat took less than a minute, and the New Jersey native went to work for a submission immediately as he took Gomi’s back. The former PRIDE champion fought to get loose, but Miller remained patient, and when Gomi’s neck didn’t open up for the choke, he went to his striking, delivering a series of unanswered blows that forced referee Mark Smith to intervene at the 2:18 mark.