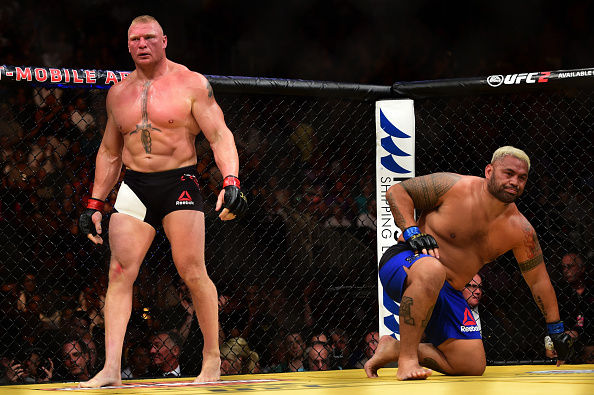 When UFC 100 took place in July of 2009, several of the fighters who scored big wins on last Saturday’s UFC 200 card were on top of the MMA world in various ways.

Brock Lesnar was the UFC heavyweight champion and the headliner of the card, as he faced Frank Mir. Jose Aldo had just knocked out Cub Swanson and was a few months away from winning the WEC featherweight title. Cain Velasquez was the hottest prospect in the sport, just three fights away from taking Lesnar’s crown. Joe Lauzon was in the midst of a streak where he had won post-fight bonuses in six consecutive bouts. Gegard Mousasi was a month away from winning the Strikeforce light heavyweight title. And Jim Miller, who fought on the UFC 100 card, defeated Mac Danzig that night, beginning a seven-fight win streak.
MORE FROM UFC 200: UFC Unfiltered - Hall of Famers talk UFC 200 | Talking Points - What's next for Lesnar and more | Celebrities react to UFC 200 | Best snaps from UFC 200

Yet as that sextet set foot in T-Mobile Arena, there were more questions than answers surrounding their future. WWE superstar Lesnar was fighting for the first time since 2011. Aldo was coming off a 13-second loss to Conor McGregor. Health was the main concern for Velasquez, while consistency was Mousasi’s albatross. As for lightweights Miller and Lauzon, their bouts against Takanori Gomi and Diego Sanchez, respectively, were crossroads battles of the highest order.

So what happened? Each of the aforementioned fighters answered those questions in a positive manner on the biggest night of the year. Lesnar beat Mark Hunt, Aldo regained a portion of the featherweight title by defeating Frankie Edgar, Velasquez looked like the Cain of old in stopping Travis Browne, Mousasi walked through Thiago Santos, Lauzon returned to the bonus column by knocking out Diego Sanchez, and Miller dodged retirement by scoring a win over Takanori Gomi.

It’s was a testament to the beauty of mixed martial arts, a reminder that for fighters, being down doesn’t necessarily mean being out. Sure, several headlines will likely focus on Amanda Nunes’ stirring capture of the UFC women’s bantamweight title from Miesha Tate, Anderson Silva’s gutsy three-round loss to Daniel Cormier, and the arrival of Julianna Pena and Kelvin Gastelum to the title picture in their respective divisions – and rightfully so – but it’s the stories of redemption and defeating the odds that always resonate.

Lesnar “doesn’t like to get hit,” so he was going to get obliterated by the hardest puncher in the division, Mark Hunt.

Aldo was damaged goods after losing for the first time in ten years.

Velasquez’ body had betrayed him one time too many, and now it was time for him to move on.

And so on and so on. But none of that happened. When the pressure was at its highest, great fighters gave fans great performances and shook things up in the process. Everyone wonders if Lesnar will continue to fight in the Octagon or go back to WWE full-time. Velasquez wants the winner of the upcoming title fight between Stipe Miocic and Alistair Overeem, and no one should be doubting his ability to get that fight and a win. Aldo has his sights set on a rematch with McGregor, and fans believe it will be going a lot longer than 13 seconds.

So for posterity’s sake, what will be the legacy of UFC 200? Call it a night when stars weren’t born, but reborn. And that’s a pretty nice legacy to have.