"As far as my career, I’m both proud and secure with it. I’ve got some
great video, some great pictures, I’ve got a belt, and a lot of stories
for the grandkids." - Matt Serra 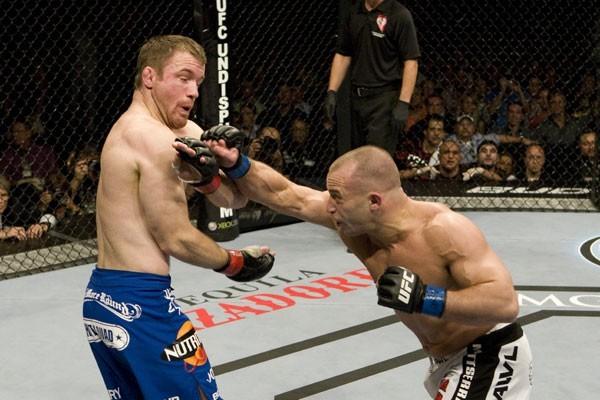 Matt Serra did a lot during his stay in the UFC, winning a world welterweight title and The Ultimate Fighter season four, coaching TUF and also coaching Chris Weidman to the middleweight crown (along with Ray Longo). He’s also the only fighter to win a fight in the Octagon, go back to the locker room and then get told that he actually lost the fight.

“I just saw my buddy Din Thomas in Manchester,” said Serra of the UFC 41 bout in 2003. “We’re really good friends now and we were on TUF together. We make jokes about that fight still. I tell him ‘I’ve got tape of me getting my hand raised; I don’t know what you’re talking about.’”

The affable Serra laughs when recalling the decision that was his for a few minutes before a scoring error revealed that Thomas was the true winner. He says of the fight “I can definitely see why they gave it to Din, but I can see where they could have given it to me too.”

What he didn’t see coming at the time was what happened next.

“What a lot of people don’t know is that I did get let go after that,” revealed Serra, whose UFC record sat at 2-3 after back-to-back losses against BJ Penn and Thomas. In the pre-Twitter age, there was no immediate news blasts that the New Yorker had been cut from the organization, and with the UFC only doing five shows in 2003, roster spots were at a premium. So “The Terror” didn’t take the news personally. He still had his jiu-jitsu schools to teach at and he had offers to fight elsewhere.

But less than a year after his release, after a fight in Japan fell through, Serra got a call from UFC matchmaker Joe Silva to face Genki Sudo. Serra agreed, but Sudo and several other fighters fell out of the bout. Eventually, Jeff Curran took the fight, Serra won the UFC 46 bout in January of 2004, and thus began one of the most storied runs the organization had ever seen, one that culminated in Serra scoring the upset of the century in 2007, knocking out Georges St-Pierre in the first round to win the welterweight title.

Even today, Serra doesn’t mind hearing the words “underdog” and “upset” when it comes to his biggest win.

“No, I loved it, I relished it,” he said of being in the underdog role against GSP. “I’m a fan of not so much the guy that’s the world beater, but the guy that rose to the occasion. I was always the Rocky type of guy and I like Cinderella Man and all those movies.”

Serra’s rise was certainly Hollywood-esque. After building a reputation as a crowd-pleaser with world-class jiu-jitsu and dynamite in his gloves, he fell victim to being the MMA version of a “tweener” – too big for lightweight and too small for welterweight. But win or lose, he always showed up to fight and he lived for those moments in the Octagon, something that came to him as he prepared for Yves Edwards following his UFC debut loss to Shonie Carter in 2001.

“I decided to keep it simple,” he said. “You like to fight, you’re getting paid to fight, you made it to the big show, and God forbid you lose and you’re out, at least you can say that you fought in the UFC. I had more that attitude than saying I was going to be the champ. It’s not that I ever doubted myself; I just took it as it came and I tried to enjoy each battle. Each fight was special for me.”

But it was after coming back to the UFC and putting together wins over Curran and Ivan Menjivar that he saw the whole world becoming just as enamored with the sport as he was, thanks to a new reality show named The Ultimate Fighter.

“In 2001 I’d go away (to fight in Vegas) and I’d come back and I’d tell my friends, ‘you don’t understand, I’m signing autographs,’” recalled Serra. “And they’re like ‘yeah right.’ (Laughs) It’s almost like you go to Vegas and you’re semi-famous for the week of the fight, and you go back home and nobody knows what’s going on. But then I remember after The Ultimate Fighter (in 2005), I saw how these guys were getting so much recognition, more so than any of us that had been in the game for a while. And I wasn’t hating on them, I was just like ‘wow, too bad I missed the boat on that.’ But it was great for the sport.”

It turned out to be great for Serra as well, because in 2006 he got the call to compete on TUF’s fourth season, entitled The Comeback. At stake wasn’t a UFC contract, but something better: a world title shot.

“When they called me, I jumped at the chance to get on there,” he said. “I thought at the very least, it’s great exposure for my schools.”

Serra got more than that out of it, as he became a staple in people’s living rooms on a weekly basis, and after beating Chris Lytle in the finals, he got his chance to fight St-Pierre. It was a million to one shot, but Serra landed it and took the belt.

He would lose his rematch to GSP in 2008, but at that point it really didn’t matter. Matt Serra had made his mark in the sport, and no one will ever forget that.

“I was just happy to be there,” he said of his beginnings in the UFC. “I was into it from the first UFC, and although it’s a different game and a legit sport now, I was a fan from Day One. As far as my career, I’m both proud and secure with it. I’ve got some great video, some great pictures, I’ve got a belt, and a lot of stories for the grandkids. And that’s great. And I’m still involved and I’m still the guy that’s happy to be here. I’m still loving it.”

And in some ways, he says that he owes it all to a scoring miscalculation that cost him a win against Din Thomas.

“I had to evolve from that anyway,” he said. “That’s the amazing thing about the game, that if I didn’t evolve from the fighter I was I would never have enjoyed the success I had and I never would have had the title.”